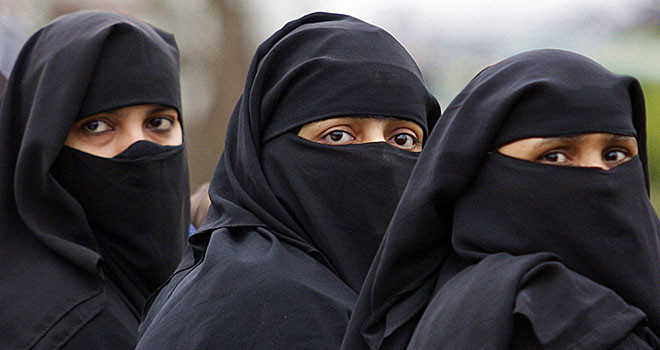 Whatever the case, the most interesting aspect of the study is not the estimate of current population, but the projection of future population. The Pew report says that the Muslim share of Europe’s population will increase even with no future migration.

Since a number of observers of the European scene are predicting much higher Muslim percentages by 2050, it may be that even Pew’s high estimate is on the low side.

Conversion and Emigration
Let’s examine some elements that may be missing from their calculations. One missing factor is conversions. Although the Pew study briefly mentions conversion rates, it views this as a negligible factor in determining the future Muslim population. Since not much is happening on the “religious switching” scene, Pew assumes that not much will happen in the future.

But given the right conditions, conversion rates can accelerate rapidly, and a trickle can turn into a flood. For the first twelve years of his “ministry,” Muhammad never had much more than a hundred followers. Then he migrated to Medina, and conversions to Islam took off. Conversions continued to accelerate after his death as Muslims swept into the Near East, North Africa and Spain.

As the Muslim portion of the European population continues to increase, there will be increasing pressures—and incentives—to convert. In his novel, Submission, Michel Houellebecq provides a convincing description of how one man—a middle-aged professor at a French university—succumbs to the temptation to convert to Islam. Without a strong commitment to anything other than maintaining his position in life, the professor sees no reason why he shouldn’t take advantage of the benefits—career advancement, money, and multiple wives—that come with being Muslim in a rapidly Islamizing France.

Another factor that is missing from the Pew projection is emigration. People who work for research firms aren’t the only ones who make projections into the future. Ordinary people also make calculations about what will happen five or ten years down the road. And if what they see is increasing crime and violence, a good many will be tempted to leave.

In the 1960s and ’70s, “white flight” from the cities to the suburbs resulted in massive and rapid population shifts in the U.S. Something similar will likely occur in Europe—except that many of the suburbs are already spoken for. Of the numerous suburbs that ring cities such as Paris and Brussels, many are Muslim no-go zones, or are on their way to becoming so.

Where will non-Muslims go? Some will immigrate to Israel, some to North and South America, and some to Eastern European countries with miniscule Muslim populations such as Poland, Hungary, Slovakia, and the Czech Republic.

The Importance of Will
Just as conversions can accelerate after a tipping point has been reached, so can emigration. But there’s also a third factor that seems to have been left out of the Pew Center’s calculations. It’s difficult to measure, but it may be the prime factor in determining which culture predominates in Europe. The crucial factor is will. If they want their culture to survive, people must be willing to defend it, and they must be willing to bring children into the world who will carry on the culture.

You can call it “will,” or “cultural confidence,” or “fighting spirit,” but whatever you call it, Europeans seem to be losing it. The problem begins in school. As Melanie Phillips noted eleven years ago in Londonistan

The British education system simply ceased transmitting either the values or the story of the nation to successive generations, delivering instead the message that truth was an illusion and that the nation and its values were whatever anyone wanted them to be.

So when some of the schoolyard tots grow up to be cops, it’s understandable that they might be more interested in defending multicultural values than traditional ones. Consequently, crimes against multicultural ideology have gone to the head of the list. In the UK, police have turned their attention away from ordinary crimes such as robbery and assault, and are focusing instead on thought crimes against Muslims. These days, you stand a better chance of arrest if you criticize immigration policy on Facebook than if you lob a brick through a storefront window.

The new form of policing makes life more difficult for the average citizen, but somewhat easier for the police who are so busy patrolling the Internet that they don’t have time to patrol the neighborhood. Of course, it’s not just time they lack, but also will. A survey of Swedish police reveals that 80 percent of them are thinking of finding another profession. Apparently, they can’t get used to the firebomb assaults on police stations, and the gang attacks against police patrols.

If the police lack the will to resist Islamization, it’s understandable that ordinary people are disinclined to take chances. Outside of the cinema, caped crusaders and wonder women are in short supply. When danger lurks, most people prefer to shelter in place. Thus, polls show that European women are increasingly afraid to go out after dark. In some parts of Sweden, when women venture outside to jog, they are now accompanied by police.

In Europe, prudence rules the day. On buses, passengers look the other way when fellow passengers are harassed. In the UK, a vicar banned the hymn “Onward Christian Soldiers” for fear of offending non-Christians. In Sweden, many towns have cancelled the traditional Saint Lucy Day celebration in case it offends Muslims. In Belgium, the cross on the miter of Sinterklass (Saint Nicholas) has been removed “in order not to exclude any child.” In France, Paris and Lyon have cancelled the traditional Christmas markets.

All of the above can be explained away with one prudential excuse or another. But sometimes there is simply no excuse. In Rotherham, England 1,400 teenage (and younger) girls were raped by Pakistani gangs over a fifteen year period. Police knew about the crimes. So did city council members. So did social workers. Yet nothing was done about the situation for fifteen long years. Yes, there were excuses—fear of being thought racist or Islamophobic and so forth—but nothing that could possibly justify this colossal abdication of adult responsibility. The Rotherham officials seem to have been lacking in a fundamental human response.

Protecting vulnerable children is a fundamental response. So is self-defense. A documentary on the Islamization of Europe contains footage of a teenage boy being challenged to a one-on-one fight by a Muslim youth of about the same size and age. The native European boy seems perplexed and when the Muslim starts throwing punches, he cowers and covers, and makes no attempt to fight back. Whether the video tells the whole story of what transpired is hard to tell. But the boy’s passive reaction seems indicative of a larger problem in Europe.

The Pew study tells us that Muslims currently make up 4.9 percent of Europe’s population. That doesn’t seem like much, but many Europeans already seem cowed. What will the situation be like in 2050, the endpoint of the study? By that time, according to the researchers, the Muslim population of Europe may be as high as 14 percent—nearly three times the current figure. As the population shift accelerates, so, in all probability, will the European descent into dhimmitude.

The Old vs the Bold
The other thing to notice is the age disparity. The median age of Muslims in Europe is 30, but the median age for non-Muslims is 44. In Germany and France the median age discrepancy is sixteen years. Or, to take another Pew statistic, 49 percent of non-Muslim Europeans are over the age of 45 whereas 77 percent of Muslims are 44 or under. If there’s not much fighting spirit left in Europe now, what will it be like in the future as Europe’s non-Muslim population continues to age well beyond fighting age? The Pew study’s high forecast for Sweden in 2050 is a 30 percent Muslim share of the population. That means that about 70 percent of the population will be non-Muslims. At first glance, that still seems like pretty good odds for the non-Muslims, until you stop and consider that a great many of those seventy percent will be living in nursing homes.

It seems almost uncivilized to put the matter in such primal terms as fighting-aged vs. aged, but, then, the survival of a civilization depends on the ability and willingness of its citizens to engage in that primal activity known as reproduction. And close to half of non-Muslim women are already past child-bearing age. As the native European population continues to age and as the spirit of resistance continues to decline, the Catholic Church’s warnings about population control, which were once dismissed as unenlightened, may soon be seen in a whole new light.

In the Time Machine, H.G. Wells depicts future humanity as having evolved into two breeds—the passive, child-like Eloi, and the brutal Morlocks who feed off them. Mark Steyn notes that Well’s science fiction society is a good analogy for what’s happening in Europe today: “You bomb us, run us over, decapitate us—and those who survive light candles and exchange flowers and sing songs.” The only thing Wells got wrong, says Steyn, is that he was off by 800,685 years (The Time Machine is set in 802,701 AD).

The Pew study also seems to have a problem with timing. The tenor of their report suggests that Europe has plenty of time to sort things out. Moreover, the report contains reassuring bits of data which seem designed to quell fears. We are told, for instance, that Muslim refugees are perceived as less of a threat in countries that take in the most of them. Supposedly, this means that once you get to know your new Muslim neighbors, you’ll see that they’re just folks. But it could just as well mean that these are the countries where people feel least free to speak their minds to pollsters—countries where you can be arrested if you say the wrong thing about immigration.

Give it a little time, and all will be well? And then, when 2050 arrives, Pew can take the pulse of the population again to see what’s up. But time has a habit of marching on a little more quickly than we anticipate. When you combine the current rate of Muslim population growth with the rapidly declining morale of non-Muslims in Europe, it may already be game over by the time that 2050 rolls around. You don’t need to be in the majority in order to dominate.

At one point, the Pew report hopefully points out that even though the Muslim population could triple by 2050, it would still be considerably smaller than the population of Christians and other non-Muslims in Europe. Maybe so. But if that larger population is largely made up of graying Eloi-types, the numbers won’t matter. Will and determination count for more than percentages.