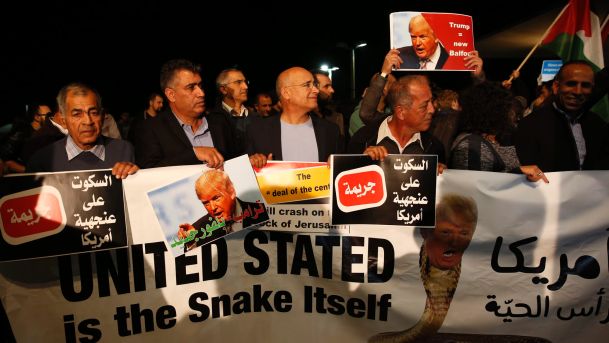 Demonstrators, among them Arab MKs, wave Palestinian flags, carry signs calling city the ‘capital of Palestine’ and decrying ‘snake’ US 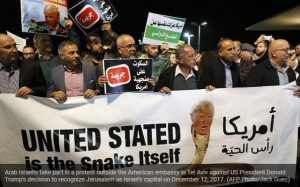 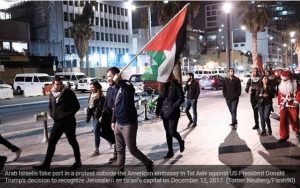 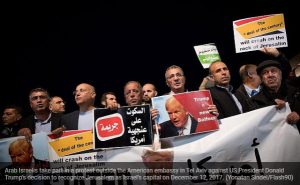 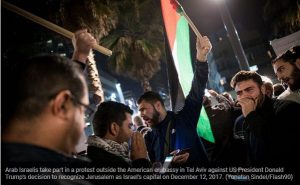 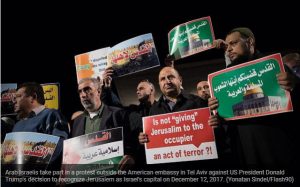 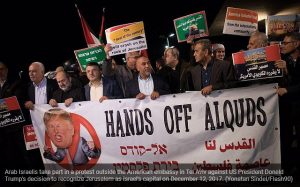 Dozens of Arab Israelis demonstrated outside the American embassy in Tel Aviv on Tuesday against US President Donald Trump’s recognition of Jerusalem as Israel’s capital.

Demonstrators at the protest, which was organized by the Higher Arab Monitoring Committee, waved Palestinian flags and carried signs criticizing Trump, including one that likened the American president to a snake.

They also carried banners declaring Jerusalem to be the “capital of Palestine” and declaring that “The United States is the snake itself.”

On Friday, thousands of Arab Israelis in the northern city of Umm al-Fahm protested Trump’s Jerusalem declaration, while on Saturday residents of the Wadi Ara area clashed with police and threw rocks at passing vehicles.

During the unrest, rock-throwers targeted a passenger bus, smashing the windows and lightly injuring the driver. An Israeli journalist also claimed to have escaped a “lynching” after rioters threw rocks at him and at police, then destroyed his motorcycle.

Following the rioting, Defense Minister Avigdor Liberman called on Israelis to boycott businesses in Wadi Ara. Despite being rebuked for the remarks by a number of lawmakers, including Arab MKs, Liberman doubled down on his comments, branding Arab Israeli legislators “war criminals” and saying they were sitting in Israel’s parliament “by mistake” and will soon “go back to Gaza, with Hamas, or Ramallah.”