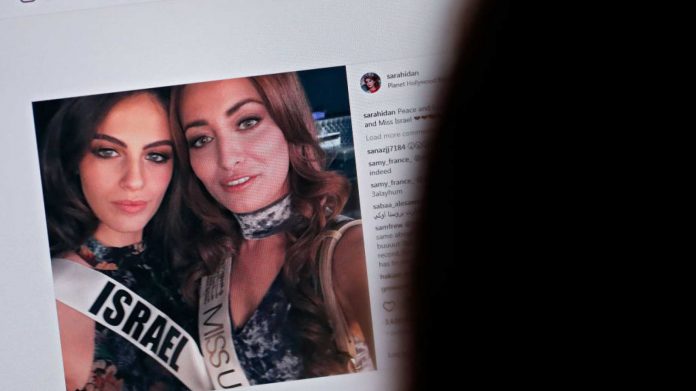 The backlash from parts of the Muslim world targeting Idan, 27, was so fierce that she posted a defense on Istagram, writing in Arabic on Instagram, “I want to stress that the purpose of the picture was only to express hope and desire for peace between the two countries,” but adding that the photo did not indicate support for the Israeli government and offering an apology if the photo was harmful to the Palestinian cause.

It didn’t help; as the Jerusalem Post reports. Gandelsman, who has become good friends with Idan, told Hadashot that Idan’s family, which still lives in Iraq, has been forced to flee the country after receiving death threats for Idan’s photos with Gandelsman as well as Idan’s posing in a bikini.

Gandelsman added that Idan said she does not regret posting the photos. She said, “She did it to so that people can understand that it’s possible to live together. In order for people to see that we can connect, in the end we are both human beings.”

Other Muslim beauty pageant contestants have been targeted for even less when it comes to Israel; in 2015, Miss Lebanon, Saly Greige, was targeted amid calls to strip her of her title after she appeared in a photo that included Miss Israel, Doron Matalon.

Greige wrote later, “From the first day I arrived at the Miss Universe pageant I was very careful not to take any pictures with Miss Israel, who tried repeatedly to take pictures with me. While I was preparing with Miss Slovenia and Miss Japan to get our photograph taken, Miss Israel jumped in and took a selfie with her phone and posted it on social media.”

Last August, then-Miss Lebanon, Amanda Hanna, was stripped of her title after it was revealed she had traveled in Israel, as Lebanese citizens are forbidden by law to visit Israel.