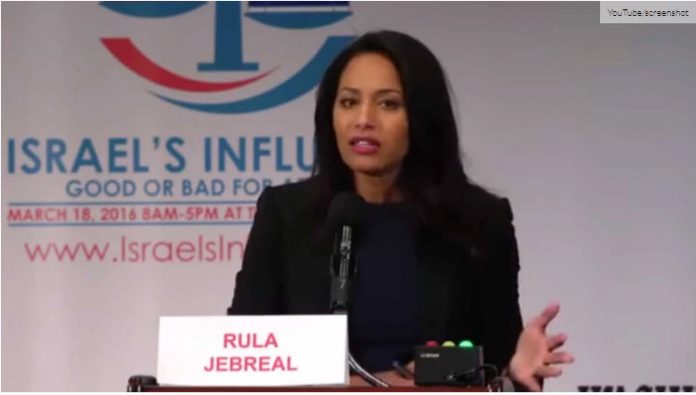 Essentially blaming the Jews for creating the circumstances that led to the rise of Al-Qaeda and other Islamic terrorist groups, a Palestinian Muslim journalist expressed a view common among left-wing political, media, academic, and cultural elites. A featured speaker at a neo-Marxist event ostensibly examining “Israel’s influence” on the United States, Rula Jebreal occasionally moonlights as a “foreign policy analyst” on like-minded media outlets such as CNN and MSNBC. She also attributed Jewish and Zionist influence with what she described as anti-black racist police brutality in Ferguson and the ascendance of Donald Trump.

“Israel’s influence here goes beyond Israel and Israeli borders,” said Jebreal, claiming that Israeli and Jewish political influence maintained the approximately $2.5 billion per year (since the 1979 Egypt-Israel Peace Treaty) in mostly military aid to Egypt. The aid, said Jebreal, preserved the authoritarian government and facilitated the rise of Al-Qaeda.

In the absence of the Egyptian “police state,” suggested Jebreal, democracy would have flourished in North African state with a population that is 90% Muslim.

The Iraq War which began in 2003, added Jebreal, was a function of the malevolent influence of Zionists and Jews. Israeli Prime Minister Benjamin Netanyahu’s 2002 testimony before a House Government Reform and Oversight Committee was provided as evidence of her claim.

Jebreal then pushed the neo-Marxist narrative of an anti-black racist police force in America with an anti-Zionist twist.

“The Israeli model is not contained in Israel, it’s being transported and it’s becoming a part of the American model,” said Jebreal. “The police who abuse their powers in Ferguson has been trained actually by Israeli police.”

American politicians, Jebreal said, were beholden to “the checkbooks of Sheldon Adelson, and Haim Saban.” Adelson is a moderate Republican Nevada-based casino-magnate with right-of-center views with respect to Israel who finances a freely distributed newspaper in Israel. Saban, a left-of-center Democrat aligned with Hillary Clinton and opposing Netanyahu from the left, owns and operates left-wing Spanish-language network Univision – home of open-borders activist Jorge Ramos.

Both Adelson and Saban are Jewish billionaires considered “pro-Israel” by anti-Zionists and neo-Marxists, feeding the anti-Semitic narrative of malevolent Jewish/Zionist political control.

Dissing CNN’s Wolf Blitzer and Anderson Cooper, Jebreal criticized the former as too supportive of Israel/Zionism in his reporting and the latter as too incompetent to sufficiently press Republican presidential candidates during interviews, debates, and other events.

Jebreal surmised that America’s media landscape is too far to the right in its political orientation, and too supportive of Israel and Zionism. The skewed orientation, said Jebreal, was a function of malevolent Jewish and Zionist control.

In her explanation of the genesis of Islamic terrorism, Jebreal made no mentions of Islamic doctrine or social forces unique to Arabs and Muslims as drivers of the phenomenon.

Previously blaming “discrimination” against Muslims for causing Islamic terrorism, Jebreal dismissed disagreement from a dissenting CNN panelist on the grounds of his white skin.