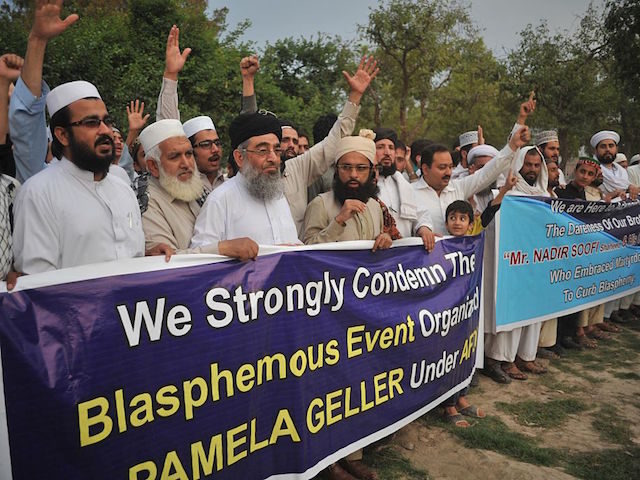 (Washington, D.C.): Today, the Center for Security Policy released an Occasional Paper on an existential threat to our freedom: an organized effort by Sharia-supremacists and the Left to impose their totalitarian agenda on our nation by using violent means as well as stealthy ones to silence any American who disagrees with them.

The author of this important analysis is the Center for Security Policy’s newest Senior Fellow, Deborah Weiss. Ms. Weiss, an attorney, author and advocate specializing in free speech- and terrorism-related issues, discusses how Islamist organizations such as the Organization of the Islamic Conference and the Muslim Brotherhood “are working diligently to control, and ultimately to criminalize all speech that sheds a negative light on Islam in a way that is tantamount to Islamic blasphemy laws.” Weiss also describes how the far-left Southern Poverty Law Center has tried to smear and vilify mainstream conservative groups that have raised alarms about the threat from Sharia-supremacists by falsely labeling them as “hate groups.”

Ms. Weiss concentrates in her paper on repeated, ill-advised attempts by Congress to pass legislation condemning and criminalizing “hate speech” – measures that actually violate the spirit of our First Amendment-guaranteed right to free speech. Weiss notes that congressional resolutions drafted supposedly to condemn “Islamophobic speech,” “hate speech,” or “hate groups” usually fail to define these terms and simply serve to divert attention from the real threat of the Global Jihad Movement and its mission to impose world-wide Islam’s toxic, totalitarian ideology which is known as Sharia – as was helpfully noted in the new National Security Strategy President Trump unveiled yesterday.

Deborah Weiss is a leading expert on the threat posed by the Global Islamic Movement and her new Occasional Paper provides a most welcome insight into its insidious campaign against freedom of expression. She is increasingly nationally and internationally recognized for her informed warnings about the campaign being mounted by Sharia-supremacists and the Left to use the suppression of our free speech in the service of advancing their radical, totalitarian agendas.

Of particular importance is Ms. Weiss’ analysis of several ill-advised attempts by Congress to condemn so-called “Islamophobic speech” and “hate speech,” seemingly oblivious to the practical effect such initiatives would have in seriously eroding American liberties – while encouraging the anti-freedom agendas of our enemies. The Weiss analysis is a must-read for all Americans concerned about new and growing threats to their rights, as well as for their elected representatives seeking to better understand this controversy – and, hopefully, to prevent congressional action in the future that undermines these rights.

You may download a PDF of the paper, HERE