The suspect and the white SUV he was driving. Pic: @Lachlanve

Among the 19 injured, two are said to be in a critical condition, including a young boy with serious head injuries.

The man who rammed a crowd in the centre of Melbourne was an Australian with a history of mental health issues, police say.

As many as 19 people were injured after a white Suzuki SUV deliberately drove into a crowd.

Four of those hurt – including a young child – have been critically injured. Police have deployed a homicide squad.

The area is now in lock-down and officers have warned people to stay away, however they have said the situation is contained and there is no ongoing threat.

Premiere of Victoria, Daniel Andrews, described it as “an act of evil and an act of cowardice, perpetrated against innocent bystanders.”

Pictures from the scene show the vehicle with a crumpled bonnet crashed into a bollard at a cable car stop.

Witnesses said there were “people flying everywhere”, with the crowd rushing to help the injured lying on the road.

Victoria state police say they have arrested the driver of the vehicle after it “collided with a number of pedestrians” in the city centre.

The driver was a 32-year old Australian of Afghan descent, who was known to police for previous historical assault matters.

He is understood to have both drug and mental health issues, and is currently receiving treatment.

The second man arrested was a 24-year-old who was filming the attack on his phone.

He was carrying a bag containing three knives, but is not believed to be connected to the attack and police say they have not established any relationship between the two men.

Speaking at a news conference, Commander Russell Barrett said that while the motive for the incident was not yet clear, police “believe it was a deliberate act”.

Footage shot on a mobile phone at the scene shows the driver, with dark hair and a close-cropped beard, being wrestled to the ground and handcuffed by officers.

A member of the public can be heard telling police “he was trying to run away”.

The man, who is wearing a white shirt and pale blue jeans, appears to be unconscious as he lies on by the side of the road.

Officers can be seen checking his pulse, and trying to revive him as they turn him onto his back by slapping his face.

They can also be seen checking his jean pockets.

The white SUV can be seen in the middle of the road with its passenger door wide open and its air bags deployed. The front of the car is completely crushed.

The second man, who was wearing jeans, a dark t-shirt and trainers, was arrested by officers on the steps of the station and can be seen lying on his side as three officers handcuff him.

Injured people can also be seen lying on the road being helped by members of the public, while sirens blare in the background as paramedics approach.

People at the scene have been described as “running towards” the injured on the ground the moment the incident took place.

At the time of the crash, the area was packed with Christmas shoppers including children, who have now finished school for their holiday break.

Reports differ as to the speed at which the car was travelling, with some describing it as not travelling fast, while others say it was travelling at around 60mph (97kph).

Witnesses told Sky News the car ran through a red traffic light in a 25mph (40kph) speed limit zone, before it began running into pedestrians.

“We could hear this noise, as we looked left, we saw this white car, it just mowed everybody down,” she said.

Commuters were warned to get off trams near the area following the crash.

It is not known whether the incident is terror-related.

The area, which has been designated as a crime scene, has been closed off to the public while investigations take place.

Reacting to the news, Australian Prime Minister Malcolm Turnbull tweeted: “As our federal & state police & security agencies work together to secure the scene and investigate this shocking incident our thoughts & prayers are with the victims & the emergency & health workers who are treating them.” 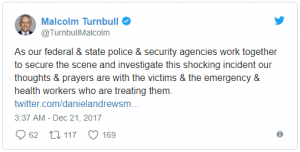 British High Commissioner to Australia Menna Rawlings tweeted, saying her “Thoughts are with all affected”.

The England cricket squad, who are in Melbourne for the Boxing Day Ashes Test, also tweeted: “Following the Flinders Street incident in Melbourne, all England players and management have been accounted for and are safe.”

The fourth Test will be held at the Melbourne Cricket Ground around one mile (1.6km) away from the scene of the incident.

Victoria Police are asking witnesses to contact them, and have urged anyone with images or video footage of the incident to upload it to their website: http://australiauploadserviceweb.cloudapp.net.

Police will be putting hundreds of extra officers on the streets over the coming days, but have stressed that there is “no increased threat” to the public.

The combination of Christmas shopping and cricket crowds mean that Melbourne city centre will be especially busy over the next week.

In January, six people were killed and more than 30 injured just a few hundred metres away when a car ran into pedestrians in a busy shopping area.

The car was deliberately driven at crowds by a man with a history of drug abuse, family violence and mental health issues. That incident was not terrorism-related.