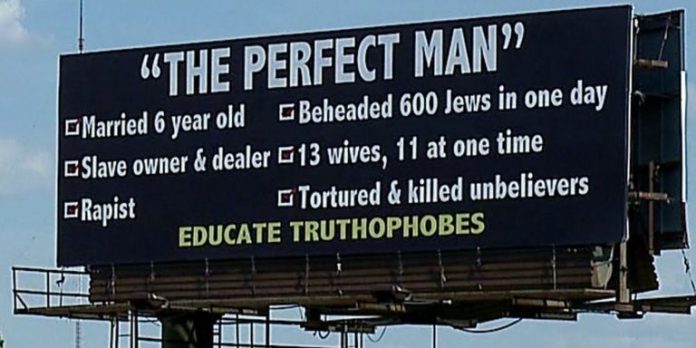 “And thou (Mohammad) standest on an exalted standard of character.”
Koran 68:4
“Ye have indeed in the Messenger of Allah a beautiful pattern of conduct for any one whose hope is in Allah and the Final Day, and who engages much in the Praise of Allah.”
Koran 33:21

Islam’s prophet, Mohammad, is considered in Islam the al Insan al Kamil – the perfect example of a man.  He is the one all muslims should imitate in all ways for all times.

The stated purpose of Islam is to impose Allah’s law, sharia, on the entire earth.  The sharia comes from the Koran and the Sunnah (the example of Islam’s prophet Mohammad).

The Sunnah is formed from the hadiths – reports of what Mohammad did and said – and from the sira, which is the authoritative biography of Mohammad. The most authoritative hadith scholar in Islam is a man named Bukhari.  “Sound” hadith by Bukhari is considered by Islamic scholars to rise to the level of just below the Koran.

The most authoritative biography of Mohammad is The Life of the Prophet by Ibn Ishaq.

Here are some authoritative quotes from these Islamic sources about Mohammad:

“Then the prophet went out to the market of Medina and dug trenches in it.  Then he sent for them (Jews) and struck off their heads in those trenches as they were brought out to him in batches…There were 600 or 700 in all, though some put the figure as high as 800 or 900.” (Life of the Prophet, Ishaq, p 464)

“Allah’s Messenger said: ‘I have been ordered (by Allah) to fight against the people until they testify that none has the right to be worshipped but Allah and that Muhammad is Allah’s Messenger.”  (Bukhari 25, book 2, hadith 18)

“The Prophet engaged me (Aisha) when I was a girl of six years…Unexpectedly Allah’s Apostle came to me in the forenoon and my mother handed me over to him, and at that time I was a girl of nine years of age.”  (Bukhari volume 5, book 8, hadith 234, narrated by Aisha)

After the assault on the Jews of Khaybar, Mohammad ordered Kinana bin al-Rabi be tortured until he disclosed the location of the group’s treasure.  A fire was lit on Kinana’s chest to force him to do so, and then Muhammad had him beheaded. Mohammad took Kinana’s wife Safiya for his own.  (Life of the Prophet, Ishaq, p. 515) 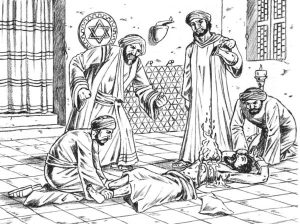 “We conquered Khaibar, took the captives, and the booty was collected. Dihya came and said, ‘O Allah’s Prophet! Give me a slave girl from the captives.’ The Prophet said, ‘Go and take any slave girl.’ He took Safiya bint Huyai.”  (Bukhari volume 1, book 8, hadith 367)

So Islam’s prophet, in the most authoritative Islamic sources, tortured and murdered Jews, married a six year old and consummated the marriage when Aisha was nine, authorized the taking of sex slaves, and commanded his followers to fight and slay unbelievers.

In Islam, Mohammad is the “perfect example” of a man for all muslims to follow for all times.