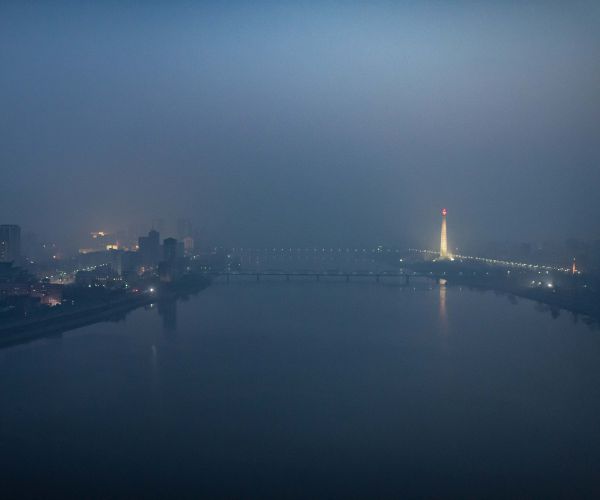 This photo shows a general view of Pyongyang at night on April 15, 2017. (Ed Jones/AFP/Getty Images)

Now after Jesus was born in Bethlehem of Judea in the days of Herod the king, behold, magi from the east arrived in Jerusalem, saying, “Where is He who has been born King of the Jews? For we saw His star in the east, and have come to worship Him.” (Matthew 2:1-2)

…and lo, the star…went on before them…and stood over where the Child was. And when they saw the star, they rejoiced exceedingly with great joy. (Matthew 2:9-11)

So the Bible tells us how the Star of Bethlehem heralded the birth of Jesus Christ.

Christianity teaches God made men free, all men are brothers, and slavery is evil. Christianity — not Aristotle, Plato, and other great classical world philosophers — introduced the revolutionary truth that Man is free by God-given natural right.

So the Star of Bethlehem was also the star of Freedom.

There is another star.

Kwangmyongsong (“Bright Star”) in Korean mythology heralded the birth on Mt. Paektu of the demigod and great conqueror Dangun, who defeated China’s Shang Dynasty and founded Korean civilization in 2333 B.C.

According to North Korean state media, dictator Kim Jong Un, his father, and grandfather, have each been born on Mt. Paektu, heralded by reappearance of Kwangmyongsong — the conqueror’s star.

The Congressional EMP Commission warns KMS-3 and KMS-4 may be nuclear-armed for a surprise electromagnetic pulse (EMP) attack that could blackout North America and kill millions, perhaps 90 percent of the population, by starvation and societal chaos.

“Children, it is the last hour! As you heard that antichrist is coming, so now many antichrists have come.” (1 John 2)

If the prophet John were alive today, surely he would count Kim Jong Un as among the antichrists.

Kim Jong Un’s tyranny is written on the bodies of his impoverished and often starving people, who are on average 3-5 inches shorter and 14-27 pounds lighter than South Koreans. They are also plagued with intestinal parasites and other horrific diseases now rare in the South.

The tyranny of Kim Jong Un is written on the people’s enslaved and broken spirits. Defector Yeonmi Park, daughter of a North Korean official, says she believed Kim Jong Un is God, and he could read her thoughts. Though starving and unjustly imprisoned in concentration camps by the hundreds of thousands, North Koreans are too terrified to revolt.

North Koreans confer a fanatical loyalty and adulation on their oppressor that is terrifying and offensive to free men. Theirs is a nightmare we would rather believe is impossible for us — yet North Koreans are our brothers, are they not?

We have the right of self-defense against North Korea. But do we have an obligation to liberate victims of slavery and genocide, if within our power?

An earlier America believed in divine justice, that God would punish even good nations for tolerating evil. President Abraham Lincoln so proclaimed in his Second Inaugural address, the overcast skies pierced by sunshine when he began to speak:

The Almighty has his own purposes…If we shall suppose that American Slavery is one of those offences which, in the providence of God, must needs come, but which, having continued through His appointed time, He now wills to remove, and that He gives to both North and South, this terrible war, as the woe due to those by whom the offence came, shall we discern therein any departure from those divine attributes which the believers in a Living God always ascribe to Him? Fondly do we hope — fervently do we pray — that this mighty scourge of war may speedily pass away. Yet, if God wills that it continue, until all the wealth piled by the bond-man’s two hundred and fifty years of unrequited toil shall be sunk, and until every drop of blood drawn with the lash, shall be paid by another drawn with the sword, as was said three thousand years ago, so still it must be said “the judgments of the Lord, are true and righteous altogether.”

In the Old Testament, the justice of God against His chosen people was sometimes rendered by evil nations, as when the ferocious pagans of Assyria enslaved Israel:

And the King of Assyria did carry away Israel unto Assyria and put them in Halah and in Habor by the river of Gozan, and in the cities of the Medes: because they obeyed not the voice of the LORD their God, but transgressed his covenant… (2 Kings 18:11-12)

Non-believers may look to history for evidence that, as a pragmatic matter, slavery and genocide cannot be ignored, but punish all, as in the Civil War, World War II, and the Cold War.

Food for thought this Christmas season, as we contemplate the Star of Bethlehem’s Prince of Peace, and the evil stars of North Korea’s “antichrist.”