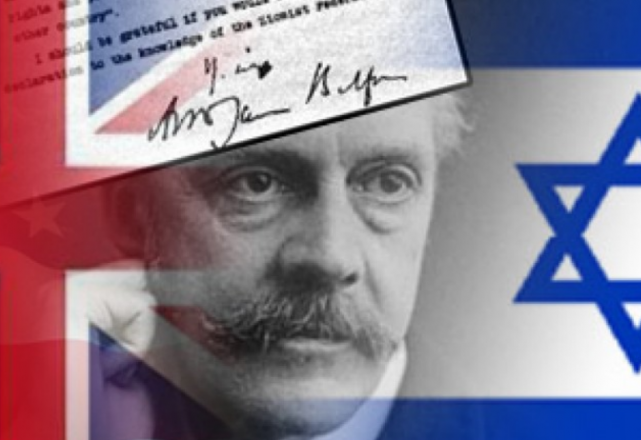 Former Israeli general Yossi Kuperwasser noted various anti-Western jihadist threats confronting Israel in its Middle East neighborhood. “Israel faces serious strategic security challenges, most of which are part of the threats against the West entirely, but for Israel they have a different immediacy and magnitude.” In particular, Iran is “becoming the hegemon power in the Middle East,” and the 2015 Iran nuclear agreement has prepared Iran’s pathway to nuclear proliferation.

Kuperwasser focused on the Balfour Declaration’s unintended legacy of conflict. This first international recognition of a modern Jewish homeland galvanized Arab opposition to Zionism in what would be the Palestine Mandate. “The Palestinians have emerged as people as a reaction to Balfour. Until then they didn’t know they were a people.”

For the newborn Palestinian people, Kuperwasser noted, the national “narrative they adopted right after Balfour focuses on denying Zionism and struggling against it until its demise.” The elements of this narrative shared across Palestinian society today include the belief that the “Palestinian struggle is nationalistic and Islamic at the same time and there is no way to separate between the two elements.” Additionally, the “goal of the Palestinians is all of Palestine and there can be no compromises.”

Arsenals such as Hezbollah’s 120,000 missiles portended ominous consequences for Levitt. Israeli daily casualty rates had shown a downward trend since the 1967 Six Day War. “That trend is going to reverse itself very, very sharply. The next battles will certainly involve higher levels not only of military fatalities, but of civilian fatalities.”

Israel faces battles beyond the Middle East in academia and politics notwithstanding an unassailable right to exist, as the video address of legal legend Alan Dershowitz noted. With the Balfour Declaration as merely one of many documents international recognizing Israel, “of all the countries that have come into existence politically in the last century or so, no country has a more lawful birth certificate.” Contrary to many countries, “Israel was established by the pen, by the law, and not by the sword. Tragically Israel has had to defend its existence by the sword.”

Dershowitz adds that “no country in history has contributed more to humanity than Israel has in the 70 years of its existence” since independence in 1948, meaning that “Israel has been the light to the world.” Yet “Israel is the only country today whose legitimacy is challenged.” He has observed as a Harvard University professor future leaders studying in academia “being miseducated” on Israel as an “illegitimate apartheid regime, genocidal regime.”  [emphasis added]

Lawfare Project founder Brooke Goldstein analyzed similar moral distortions of Zionism, the “best narrative in the whole wide world,” the “ultimate fairy tale,” and the “original civil rights movement.” As the example of African-Americans showed, Zionism “inspired countless other civil rights movements.  So we were basically the ones who invented intersectionality….We are the progressive values.” By contrast, “you cannot be a civil rights advocate and support the establishment of a Palestinian Islamic state.”

Goldstein elaborated upon Palestinian appropriation and inversion of Zionist history, noting that there was a

native indigenous people who were kicked out of their land, who were subject to colonialism, apartheid, genocide, collective punishment, their home was subject to illegal occupation, they were put in refugee camps, they were put behind walls, their humanitarian flotillas were turned away because of racist immigration policies, their sovereign rights as a nation were denied, and all the while they just longed to go back to their olive tree and free Palestine from the river to the sea.  Does that sound like a familiar story?  That is the story of Zionism, and yet in a twisted, Orwellian, PR strategic, manipulative move, our story has been used against us and there are Palestinian, or so-called Palestinian Arabs, claiming that to be their origin story.

This invented Palestinian propaganda then justifies the Boycott, Sanctions, and Divestment (BDS) movement against Israel, Goldstein stated. Although not necessarily successful in concrete terms, BDS “is all about dehumanizing Jews which is the precursor to justify violence.” Balfour Declaration historian Edwin Black noted in an audience comment that the “slogans of the Third Reich have been replaced with the slogans of the BDS movement,” something not surprising given World War II Nazi-Arab collaboration.

The results of such incitement are predictable for American Jews on college campuses, Goldstein observed. “We have Jews who are on campus today who are either ashamed to call themselves Zionists or they are afraid to call themselves Zionists, they are afraid to wear kippahs on campus…they are literally getting beaten up.” Susan B. Tuchman, director of the Zionist Organization of America’s (ZOA) Center for Law and Justice, noted thereby the role of campus “hate groups” like Students for Justice in Palestine (SJP).

Goldstein in turn condemned the leftist, self-proclaimed Jewish group J Street whose chapter leaders are sometimes not even Jewish; “J Street is not Jewish. It’s a Jew-washed SJP.” She noted that J Street had expressed support for a recent appearance of Linda Sarsour, a Palestinian-American “rabid anti-Semite,” at a panel on antisemitism at New York’s New School. “If that is not cultural appropriation, I do not know what is.”

Demonization of Israel is having an effect on Jewish attachment to their ancestral homeland, noted Gusti Yehoshua-Braverman, the chair of the World Zionist Organization’s Department for Diaspora Activities. “The Jewish connection with and commitment to the state of Israel is growing weaker, especially among young Jews.” Israel “is no longer a source of pride and identification in their eyes,” but rather a “kind of burden.”

In these circumstances some Jews seek to submerge any particular Jewish identity in a universal progressivism in which Israel is also a politically correct subject of opprobrium, noted Baroness Ruth Deech from the British House of Lords. These Jews say “no, we are not like those other Jews, we are good Jews. But in fact they are Jews only really one day a year when it comes to writing letters and signing declarations against Israel.” Likewise some Jewish youth want to be “members of the religion of Tikkun Olam,” noted Israel Forever Foundation Executive Director Elana Heideman.

Endowment for Middle East Truth (EMET) President Sarah Stern analyzed the effects of such a political climate upon a formerly bipartisan support for Israel in America. “Israel used to be a consensus issue,” but now there is an “atrophy of support on the progressive side of the Democratic Party.” This “is simply not the Democratic Party of my father and my grandfather’s generations. We need to find our Hubert Humphreys and our Scoop Jacksons once again.”

In the midst of such disturbing developments, Middle East Forum President Daniel Pipes confidently channeled his inner Ronald Reagan with calls for a paradigm shift in approaching Israel’s conflict with the Palestinians. Echoing Kuperwassser, Pipes noted that for Zionism and Israel the “fundamental challenge is to break the Palestinian rejectionism that goes back almost exactly a century.” While Israeli accommodations in pursuit of various “land for peace” strategies have failed to appease this rejectionism, “what is necessary is a Palestinian sense of defeat.” “Our government needs to get away from the peace process model and adopt instead an Israel victory model; our side wins and their side loses.”

A century after the Balfour Declaration, the AZM “In the Spirit of Balfour:  Zionism Forward” conference showed an Israel going from strength to strength despite seemingly never-ending conflicts. Levitt saw therein a lesson for a Western world also now facing long term jihadist threats. “The greatest thing we can learn from Israel is a lesson in resilience.”