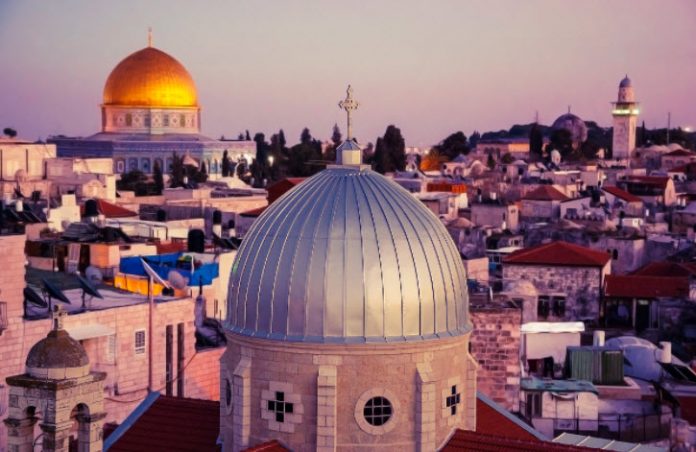 In the Holy Land, the “job of most journalists here is to take bits and pieces of reality and slot it into the existing script,” stated former Israeli journalist and author Matti Friedman during the October 15-18 Christian Media Summit in Jerusalem. Hosted by the Israeli government in Jerusalem’s Hotel Leonardo, the conference’s excellent panelists provided insight into the distorted media coverage of Israel’s longstanding conflict with its Middle Eastern neighbors.

A former Associated Press (AP) reporter, Friedman noted that the “mainstream media is actually a thing.” “BBC, New York Times, AP, Reuters, CNN, and so forth, those organizations tend to move as a pack” in a “herd mentality.” When these organizations seek themes to organize long term coverage of various regions, “journalists end up agreeing on what the ‘story’ is.”

Unifying narratives aid journalists reporting completely unfamiliar topics, like Friedman who had the “embarrassing experience” of receiving a sudden AP assignment to cover Russia’s 2008 invasionof Georgia. For someone like him who had absolutely no knowledge of these countries and their languages, the “journalistic talent ends up being bluff,” with the resulting tendency that “you cling to the simple story that others are reporting.” His Georgia experience “led to an increase in cynicism that ended up with me kind of finding something else to do.”

For Friedman, the resulting journalism is “like you are shoveling coal on a locomotive. The track has been laid, it is going, and you can either shovel coal into the locomotive or you can find another job.” Concerning particularly Israel and its Arab neighbors, the common journalistic storyline is that a conflict between Israel and Palestinians began in the 1967 Six Day War and ending a resulting Israeli occupation would end the conflict. “I wrote hundreds of stories probably based on those foundations,” but “if you look at the story with the eyes of someone who knows a bit about this place, you will see that it is almost entirely fictional.”

Many of the international journalists that I have worked with over the last 30 years, they come to this part of the world with this perception that there is a conflict going in the Middle East and in this conflict there are good guys and there bad guys.  The good guys are the poor oppressed Palestinians and the bad guys are the Israelis.

As a practical matter, foreign journalists also often naively rely upon local Arabs for translation services and other native knowledge, noted Toameh. Yet “many of my Arab colleagues do not want to report about anything that reflects negatively on the Palestinian Authority [PA] or Hamas.” International Christian Embassy Jerusalem Vice President David Parsons similarly noted media willingness to downplay Palestinian leadership outrages such as PA President Mahmoud Abbas’ 2016 anti-Semitic blood libel before the European Parliament. “There is protectionism of the Palestinian distortion among some of the mainstream media because these are go-to sources, they want access to them.  They don’t want to put them in such bad light.”

For Toameh, who divides his career with the 1993 Oslo Accords, the overall results are clear. Pre-Oslo, he previously received praise for criticizing the Israeli government. Post-Oslo, his exposés of human rights abuses and corruption under the PA brought him accusations from his Western journalist colleagues of a being a “Zionist agent.”

Dexter Van Zile, Christian Media Analyst for the Committee for Accuracy in Middle East Reporting in America (CAMERA), meanwhile located media distortion of Israel within a wider “cognitive war against the West.” This “is an effort to somehow undermine Western confidence in the West itself and also in the legitimacy of the Jewish state.” Accordingly, “there is a whole machinery used basically to transmit this hostility and this anti-Israel agenda into the peacemaking and human rights community in the West.”

Yet the Israeli army veteran Friedman noted that distorted perceptions, however widespread, are no substitute for hard reality. In the 1990s, he recalled, most Israelis like him believed that

Bitter experiences with Hezbollah in Lebanon, Hamas in the Gaza Strip, and the PA have proven otherwise.

We have learned since the 1990s, when Israelis voted several times for withdrawal in the peace accords, that if you create a vacuum in this part of the world it is filled by these guys with black masks and black flags.

“The war of 1967 was a symptom of the conflict that existed before 1967” and the “occupation is thus a symptom of the war, and not the cause of the war,” observed Friedman. His fellow conference speaker and man of letters Micah Goodman agreed, even as he examined his Catch 67 book on Israeli dilemmas concerning Palestinian populations and disputed territories following the Six Day War. “The conflict is not a result of the occupation. Historically the occupation is a result of the conflict. This recognition was a serious blow for the Israeli Left.”

Friedman remembered that “in 2000, the most leftwing government we had ever elected, which I voted for, was on the receiving end of the worst wave of terrorism that we had ever seen.” A Hamas bombing even struck a cafeteria at Jerusalem’s Hebrew University where he was studying. “Since then, more or less, the parties of the Left, for whom I still vote for, can’t get elected.”

Israeli Minister of Education Naftali Bennet, head of Israel’s rightwing religious Jewish Home Party, told the conference that “all of Israel is moving rightward, but it’s not because of us. It is because of this small thing called reality.” While in past decades a small Israeli majority might have supported a land-for-peace, two-state solution, “my generation is much more realistic,” even though “we grew up on songs of peace” that he still sings to his kids. Today “I vehemently oppose handing over any more Jewish land to Arabs, period.”

Bennett’s caution reflected the conference presentation by Palestinian Media Watch Director Itamar Marcus on the anti-Semitic and anti-Israel hate propaganda permeating Palestinian society. Christian Broadcasting Network CEO Gordon Robertson correspondingly likewise doubted past proposals for Arab-Israeli peace. “When you are dealing with people who are raised from birth with the idea that the greatest thing you can do is go and kill Jews, can you ever really have peace with them?”

American-Israeli political analyst Caroline Glick tied Israel’s misunderstood plight to wider Western illusions in dealing with Islam. She castigated a “mind-blowing cowardice on the part of the West to notice the threat that is inherent in a large and ascendant part of the Islamic world” that is “organically, authentically Islamic.” In particular, “pure and utter insanity” characterized President Barack Obama’s Iranian nuclear agreement.

Such misunderstanding is dangerous, for the wider Western world faces with Israel common threats, as Bennett noted.  Israelis in the Middle East “are here, the forefront of the battle between the free world and radical Islam.” In this struggle, Israeli academic Mordechai Kedar observed while calling for stricter immigration controls, for the West the “battlefield is already in the streets of Paris” and other Western cities; the “fight is already beyond your threshold.”