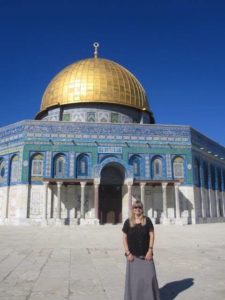 “If you are anti-Israel, you are anti-God….You cannot separate God from what he loves the most…the Jewish nation that he chose,” stated the Danish Christian Zionist Jane Kiel (“Jerusalem Jane”) to me last October 11 in Jerusalem. Her personal “love story” with Israel, and the insight this ongoing experience in Jerusalem offers, is even more valuable this Christmas season following President Donald Trump’s controversial decision to recognize Israel’s historic capital.  [emphasis added]

Kiel, who later attended with me the Israeli government’s Christian Media Summit, related her biography to me in the Coffee Bean café on Jaffa Road, where the Jerusalem light rail runs through the city’s downtown. As has previously been reported, she was one of five children in a devoutly Christian small-town Danish family whose mother led a monthly prayer group in her home. With her grandparents and mother praying for Israel every day, “Israel was always at the center of attention at our home,” Kiel has stated in the past. As she has discussed before, she noted to me that Christians “would not have a faith if it wasn’t for this nation” of Jews, from whom came a Jewish messiah, Jesus.

Already in Denmark, Kiel engaged in Israel advocacy, as she often notes with her account of protesting Yasser Arafat’s 2001 visit to the Danish parliament in Copenhagen. As she explained to me, she and her mother displayed large Israeli flags in response to Arafat, a “terrorist with so much Jewish blood on his hands.” That day’s downpour upon his visit signaled to her that “when it comes to Israel, it’s a spiritual battle; it’s a battle between God and Satan.”

Although Kiel had often visited Israel, she felt God calling her to settle permanently there. In 2010, she “stepped out completely in faith,” sold her possessions in Denmark, and moved to Israel initially on a tourist visa as a woman with few resources and no job. Yet later in Israel, she says she heard God ask her, “Would you be a voice for Israel in the media?”

Supported by donations from abroad, Kiel ultimately established a successful online pro-Israel presence, including the Facebook page Israel, One Nation, with over 143,000 followers. Outside of Israel, people communicated to her that “we love what you are doing because you are our eyes and ears in Israel,” while hundreds of emails from Jews noted that “we didn’t think we had friends like you.” She now has an Israeli press pass and journalist visa.

Kiel has focused much of her reporting on Jerusalem’s Temple Mount, Judaism’s holiest site, now occupied by the Muslim Al Aqsa mosque and Dome of the Rock shrine. She repeatedly notes that Israeli agreements with the Muslim authorities administering the Mount prohibit prayers by Jews and other non-Muslims, while they often face harassment from Muslims when visiting. Her reporting activities on the Mount and occasional prayers have made her known to the Muslim authorities, who have expelled from the Mount four times.

Kiel’s increasing prominence has also brought her threats, such as photos taken of her on the Temple Mount and in Jerusalem’s Old City, emailed to her with the words “leave our Aqsa in peace.” She showed herself defiant to me, stating that “I didn’t come here to be a coward. I didn’t come here to be quiet. They can threaten me all they want.” Confident in divine providence, she believes that “I am having angels working overtime protecting me…some big bodyguards working with me that you can’t see.”

Discussing these dangers in Jerusalem’s pleasant Jaffa Road neighborhood, Kiel notes the “spectacular paradox of living in Israel,” where inhabitants of a developed country can never forget violent Middle East realities. Among her many online video reports, she has recalled a 2016 incident when an unclaimed backpack on the light rail train she was riding provided a brief bomb scare. Another video shows police response to the aftermath of a stabbing attack in the Jaffa Road, not far from the Coffee Bean café.

Yet Israel is not so dangerous in comparison to the world’s other free societies that increasingly face similar threats from Islam, according to Kiel. To me she echoed her past comments and noted that her native “Europe does not know what hit them” in the form of mass Muslim migration over recent decades, and in particular in the last few years of the “refugee” crisis. She recounted that

” ten years ago I was saying, you know what, this is crazy, you know, with the borders and everything and I had people telling me, you are a racist. And I said, “I am racist?  I am a realist.” And the same people are saying now, oh my God, you are right.”

One of Kiel’s videos notes how her Star of David necklace received ugly looks from ethnically Arab men during one of her Sweden visits. Another video observes how for similar reasons she avoided wearing a Star of David necklace while living for five weeks with a Christian Arab in Beit Jala, a town near Jerusalem under Palestinian Authority control. She simply acted as a “dumb tourist” during this time, while experiencing sexual harassment on daily commuter buses traveling to Jerusalem across Israel’s security barrier.

Kiel explained to me that “I am more safe living in Israel than I am had I been living in Spain, France, England, or Germany. They are raping all the women.” A Jerusalem taxi driver told her that in Europe “now they are beginning to see for themselves, because they are being attacked by all the Muslims, so now they will begin to see what life has been for us the last 50-60 years.” Comparing the United States’ relatively high rate of violent crime to Israel’s less frequent incidents of terrorism, many Americans, meanwhile, have told her that “I feel more safe here than in walking in Detroit or Chicago or New York.”

Given her threat analysis, Kiel’s videos castigate individuals such as former President Barack Obama for their naïve pandering to Islam, with its “insane lie” that Islam’s prophet Muhammad flew to heaven from the Temple Mount. “Islam is the religion of peace? I want to throw up. Islam is the religion of hate, of theft, of massacre,” while Muslims “pray to a fake god they call Allah.” Today “Muslims are running this world with fear. If there is something they don’t agree, they just make a mayhem. They just mutilate, they just kill; they just make riots.” “Muhammad conquered with the sword. That is what they are still doing,” she told me.

Under these circumstances, Kiel finds ludicrous proposals for a two-state solution to Israel’s conflict with its Palestinian neighbors. As she wrote at the Jerusalem Post, a Hamas-dominated “Gaza became a launching pad for thousands of rockets! Now, Muslims and Arabs are demanding the same for the Temple Mount” and the entire West Bank. Then, she told me, even vital Israeli infrastructure such as Ben-Gurion Airport would be under direct fire.

“Everybody knows it is not going to work,” Kiel told me. Palestinians overwhelmingly refuse to conceive of a Jewish state of Israel within any borders, rather “it’s just from the river to the sea, Palestine shall be free.” “You tell me how there will ever be peace when you brainwash your children,” she asked in light of incessant Palestinian media that demonizes Jews and incites murder. “Israel is supposed to make peace with them.  Are you kidding me?  It cannot be done.”

Notwithstanding such unreality, Kiel has worried that the “Arabs are winning the media battle,” precisely in part because Western governments fund pro-Palestinian organizations. She has written at the Jerusalem Post that the “entire deception that a fraudulent Arab people calling themselves Palestinians ever had a state is perhaps the biggest scam ever perpetrated upon the world.”

My mention of the “apartheid” slander against Israel made Kiel “talk about all-Arab cities where Jews cannot go” in the Palestinian territories because, as Israeli signs warn, Israelis there face murder. “If, God forbid, there would ever be a Palestinian state, it’s going to be ‘Judenrein,’” she said to me. Meanwhile, Israeli Arab Knesset members such as Haneen Zoabi enjoy all the benefits of Israeli democracy while calling for the Jewish state’s destruction. “Every time I have met her in the Knesset, I feel my knuckles are tingling, but my mom raised me to be polite,” Kiel said to me.

In the face of such attacks, Kiel emphasized to me the need for Christians to support Israel. They often “are living in their little happy-clappy, Christian bubble, going to church every Sunday, glory hallelujah and everything is fine and why should we care about Israel.” “Don’t just come here and run around to all the Christian sites,” she says of Christians visiting the Holy Land; rather, meet Israeli soldiers and police; “it is important to connect with the Jewish people…say we love you.”

Notwithstanding any current dangers to Israel, Kiel remains confident in her faith in the God of the Bible. She has written that “when you take on Israel, you are taking on the God of Israel. Every nation and civilization that did so, perished!” “We are living in Biblical end times,” she also has claimed, and that for the Jews “there will be a third Temple” on the Temple Mount.

Kiel’s alternative, start-up journalism provides an antidote to anti-Israel media bias with reports from Jerusalem’s daily life. This will please many Christian Zionists and Jews, although the views of the former are more diverse and nuanced than a caricature of Kiel might suggest. Yet even others will have difficulty refuting her reality-based observations. As she noted to me while surveying Jewish survival against all odds throughout history, “Israel is living proof that God exists. If you don’t believe in God, look to Israel.”