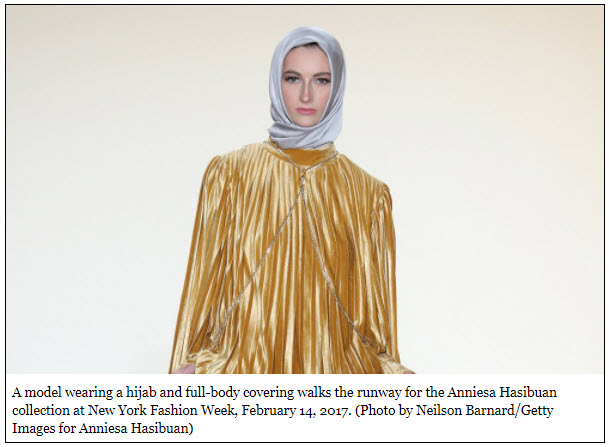 We are not talking about the dreary type of Muslim garment of Raqqa or Kabul, but a global market that is a Westernized, colorful, supposedly joyful Islamic enterprise.

First it was a Muslim woman wearing a hijab in Playboy. Then Nike released a “performance hijab” for athletes. Meanwhile, last spring, Aab, one of the world’s leading Islamic clothing retailers, opened its first boutique in London, just in time for the annual London Fashion Week. Vogue Arabia published its first-ever print issue. Last month, Mattel unveiled, so to speak, the world’s first hijab-wearing Barbie doll, who is apparently part of a new series dedicated to women “breaking social barriers“.

A conformist and “inclusive” establishment, eager for profits, has turned the Islamic veil into a purportedly new symbol of freedom and fashion. Islamists have understood this psychology among Western elites, who are terrified to be accused of “Islamophobia”. This is how Islamist misogyny has been turned into a global garment. Take a recent Vogue announcement:

“Dolce & Gabbana is producing a collection of hijabs and abayas [full-length Saudi covering for women] targeted to Muslim customers in the Middle East. To Muslim women with a taste for luxury fashion, this collection is an exciting development”.

Islamists have had trouble imposing hijabs and abayas without resorting to intimidation and violence; the Western establishment, however, seems to be helping them to succeed, while legitimizing their ideology, by turning these tools of oppression into a mainstream garment. For instance, a Swedish delegation of 15 officials visiting Iran, led by Sweden’s Prime Minister, included 11 women; they wore Islamic headscarves “almost all of the time” while in Iran. Such European alacrity in submitting to political Islam was also clear in the shameful covering of nude statues in Rome during the visit of the Iranian President Hassan Rouhani in 2016.Unfortunately, for most of women in the Middle East, veils and abayas are not an “exciting development”, but an imposition by an obscurantist ideology. After the Islamic State was defeated in Raqqa, Syria, many women took to the streets to take off their veils. Last June, similar images were seen after Raqqa was first freed from the Islamist dictatorship. Women were filmed burning their veils.

The headscarf, even when it is worn freely, designates women, in the name of religion, as responsible for controlling sexual urges in men. By classifying women as either “modest” and “immodest”, it is a sign of submission to Islamist codes inherited from the 7th century. Even to point out that this is said in their own books, such as the Quran, is considered “Islamophobic”.

While the fashion industry is busy appeasing political Islam, women in many Islamic countries are still suffering violence and intimidation under Islamic law (sharia). The question of women’s rights — to drive a car (now finally permitted in Saudi Arabia); to ride a bicycle (forbidden in Iran); to leave the house without the permission of a male “guardian”; to have the same “value” in a court of law as a man; not to be beaten, and so on — has become the standard for progress in the Islamic world.

In Indonesia, a woman was recently caned in public for “adultery”. She was forced to kneel in front of a crowd of onlookers, then flogged 100 times by a masked enforcer, after which she had to be admitted to a hospital.

Meanwhile, in the UK, a country hosting some of these Islamic fashion events, The Independent is trying to deny that Muslim women are suffering abuses in the sharia courts that operate legally in Britain. In France, many cafés have become “no-go zones for women“. The submission of women is not only being imposed in the Islamic world, but now also in Asia and the West.

According to the French philosopher Elisabeth Badinter, the view that all cultures are equally valid combined with the view that it is important to protect everyone’s differences has “contributed to questioning the universality of human rights”. Cultural relativism, on which this glamorization of Muslim veils is based, locks women into a subordinate condition. It also betrays all those Muslim women who dream of a world without religious commands — such as obligatory virginity and being the sole bearers of honor for an entire family or clan — and it betrays those women who long for a world where everyone can build his or her own identity. Does “breaking barriers” (as Mattel proclaims) mean, for a woman, social emancipation and freedom of choice, or submission and “modesty”?

“The enemies of freedom are first recruited from the free societies, from some of the enlightened elites who deny the benefit of democratic rights to the rest of humanity, even to their own compatriots, if they have the misfortune to belong to another religion, to another ethnicity”.

Instead of embracing these veils, a true feminism should defend the rights and freedoms of all women. It should not be ideologically submissive to those who repress women. It should not refer women to their “culture of origin” on the pretext of not offending their “difference”. That way just leads to reinforcing wife-beating, forced marriage, forced seclusion, polygamy, legal inequality, female genital mutilation, and being stoned to death for supposed “adultery,” which all too often means being raped.  [emphasis added]