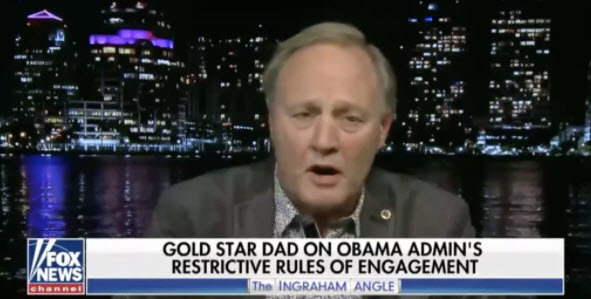 President Donald Trump has received praise from the military after he and Secretary of Defense James Mattis made a change which loosened the rules of engagement, giving the military more freedom to act. For example, troops were no longer required to be in contact with the enemy in order to fire back and air support is now much easier to obtain.

On Wednesday, Gold Star father Billy Vaughn appeared on Fox News to explain just how important a change this was and how it is saving military lives.

Billy’s son, Aaron Carson Vaughn, was a Navy SEAL who was killed on August 6, 2011, in the Tangi River Valley of Afghanistan after his chopper was shot down from the sky. Months later, they found out that “the downing of Extortion 17 was at best unnecessary and at worst, a negligent, reckless loss of life” according to their website.

During his interview, Vaughn explained that there were many things that should have been done differently, and they were a direct result of the old rules of engagement.

He stated, “The helicopter pilots, when they were giving testimony, one of them said that there was a one in a million chance that they could get pre-assault fire approved and the other one said we never ask for it because it’s never approved anymore. It was two different testimonies at two different times. That could have saved the warfighters that night.”

He went on to describe the horrific night:

Then he explained how Obama operated:

“President Trump in August said that he was going to give more authority to the war fighters on the ground, to those people. Under President Obama, a lot of that authority, as you made an earlier comment earlier tonight, was being done by people back in Washington D.C. inside the White House who had never seen the theatre of war, who had never been in the battlefield at night with bullets whizzing by heads.”

Watch the interview below.