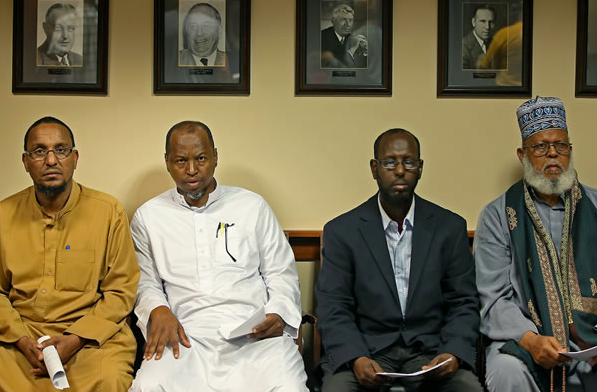 Leaders of the Somali community in Minneapolis usually get what they want from the city’s dhimmi mayor, Betsy Hodges, but when they complained about a Shariah cop patrolling the streets of their neighborhoods in the spring of 2017, the city’s police department sat on its hands and did nothing.

A 22-year-old Muslim convert has been denounced for trying to enforce Shariah law on Somali refugees living in Minneapolis, but he says he’s just trying to be a good Muslim and please Allah.

Abdullah Rashid married a Somali woman and moved from his hometown in Walton County, Georgia, to Wyoming and then on to Minnesota last year. Formerly Devon James Miller, Rashid now dresses in traditional Islamic headdress. But when he isn’t in a turban, he wears a green uniform with a patch marking him as the “religious police.”

That’s causing quite a stir, even in the Muslim enclave of Minneapolis’s Cedar Riverside community.

In a recent interview with the Minneapolis Star-Tribune, Rashid said he aims to turn the city’s Cedar-Riverside area into a “sharia-controlled zone” where Muslims are learning about the proper practices of Islam and that “non-Muslims are asked to respect” it, the paper reported.

He pays regular visits to Somali households and makes sure the women are dressed in compliance with Islamic law, that no alcohol is being consumed and that nobody is interacting with the opposite sex. He is performing, in his mind, a service similar to that of the morality police who enforce Shariah in Saudi Arabia, Iran, Somalia or the Islamic State.

He claims to have 10 other men working under him to patrol the Cedar Riverside community.

Abdullah Rashid, 22, grew up in Georgia and converted to Islam in his teens. He married a Somali woman and moved to Minneapolis in 2016.

There’s one problem: While Rashid says he is just trying to be a good Muslim and do right by Allah, someone needs to remind him he isn’t living in Saudi Arabia, Iran, or Somalia.

“People who don’t know me would say I’m a terrorist,” he told the local newspaper. “I’m someone who’s dedicated to Islam and trying to help the community all ways I can.”

Local Muslim leaders told the Star-Tribune they are working to stop Rashid’s group, the General Presidency of the Religious Affairs and Welfare of the Ummah, while providing no evidence that they are serious about stopping him.

Minneapolis is home to the nation’s largest community of Somali refugees, which have been arriving in the U.S. since the late 1980s, most coming from United Nations refugee camps.

The Somalis have taken over Democrat Party politics in the sixth ward in Minneapolis, and a recent video showed their caucus event devolving into bloody chaos.

Rashid has encountered some backlash, even from other Muslims who may not yet be ready for full compliance with various aspects of Shariah law, or who know it would do long-term damage to Islam’s reputation in America if Muslims try to implement Shariah too early.

Rashid has been questioned by Minneapolis police who say they are “monitoring” his actions.

He has been condemned as out of line by local Muslim leaders, according to the Minneapolis Star-Tribune, which turned to the Council on American-Islamic Relations, or CAIR, for the authoritative word on Shariah.

“What he’s doing is wrong and doesn’t reflect the community at all,” Jaylani Hussein, executive director of CAIR Minnesota, told the Star-Tribune. CAIR, an offshoot of the Muslim Brotherhood, is an unindicted co-conspirator in the Holy Land Foundation terror-financing trial held in 2007-08 in Dallas and which has seen several of its leaders convicted of terrorism-related crimes.

“We’ve had conversations with community members that live over there,” Officer Corey Schmidt, a police spokesman, told the Star-Tribune. “Sometimes it takes a little bit of time to deal with it, but it’s something we’ve been monitoring.”

There are other troubling aspects to Rashid’s mission, such as his display of the al-Qaida flag and his adoration of Anwar al-Awlaki, the American-born imam of Yemeni descent who was a spiritual leader of al-Qaida before he was killed in Yemen by a drone strike ordered by President Obama.

His Somali wife, Kadro Abdullahi, said Rashid is not mentally ill and that she supports his work.

“He’s a man with a good personality and he loves Islam,” Abdullahi told the Star-Tribune.

On the same day the Star-Tribune reported a Shariah enforcer is making house visits in Minneapolis, the Detroit News reported a female Muslim doctor in Detroit was arrested on federal charges that she was performing female genital mutilations on girls as young as 7.

Dr. Jumana Nagarwala was charged in Detroit Wednesday with mutilating the genitalia of young girls.

Jumana Nagarwala, a 44-year-old emergency-room doctor at Henry Ford Hospital, was charged with female genital mutilation, a five-year felony, and transportation with intent to engage in criminal sexual activity, a 10-year felony, according to a complaint unsealed Thursday in U.S. District Court. It is believed to be the first case of its kind prosecuted under federal law.

The Star-Tribune, which surprised some by even reporting on the Shariah cop in Minneapolis, described Shariah as merely a set of customs that Muslims follow as a “daily guide” and that varies in practice around the world. That is almost word for word the description for Shariah given by the Southern Poverty Law Center, a left-of-center political organization that defends Islam at every turn.

“Al-Awlaki was as bad as it got in the terrorism world,” noted former Minnesota Rep. Michele Bachmann.

“So dangerous was al-Awlaki that even President Obama ordered his death through a drone strike, the only American Obama ordered killed on foreign soil.”

Thursday’s revelation in the Star-Tribune is frightening, Bachmann said.

“Today, walking freely on the streets near the former hippie enclaves of the University of Minnesota, near downtown Minneapolis, and in the shadow of light-rail connecting to the Mall of American and the new United Bank football stadium, site of the 2018 Super Bowl, is a Muslim man wearing al-Qaida flags on his green ‘religious police uniform’ who takes his directives from the chief recruiter for Islamic terrorism in modern times.”

Attorney Daniel Akbari once practiced law before Iran’s top Shariah court. He now lives in Texas and converted to Christianity.

Akbari said Rashid may be jumping the gun in enforcing Shariah, thus incurring the wrath of imams and CAIR leaders who may see him as usurping their authority.

Akbari said the Quran provides three basic mechanisms for spreading Islam: Dawa or proselytizing, jihad and the enforcement of Shariah. But the Shariah mission is to be implemented in phases in areas where Muslims already have control and want to maintain their authority.

Shariah can be enforced both privately and collectively, he said.

Akbari said “private enforcement of Shariah is exactly what Abdullah Rashid is doing.”

“CAIR members strongly disagree with their faithful but naïve Muslim brother, Abdullah Rashid. CAIR is well aware that they have not reached that point yet. They know how rushing to enforce Shariah will irreparably damage their mission of bringing everyone under the control of Shariah law.”

“Leaders of CAIR called ISIS non-Islamic because they believed that their savage brothers did not follow the way the Messenger of Allah did when he was in a weak position,” he said.

“When the Messenger of Allah was in Mecca, he did not wage jihad because he knew he was not in a strong position. It is not that ISIS’ brutal actions are non-Islamic. The only non-Islamic action they committed was revealing the real face of orthodox Islam too early when there are still works to be done.”

Islam is all about Shariah

John Guandolo, a former FBI counter-terrorist specialist who now consults law enforcement with Understanding the Threat, said there are two reasons Muslim organizations clash: over matters of Shariah and matters of power and control.

“What Abdullah Rashid is doing is lawful under Shariah, and CAIR and the other Muslim groups mentioned in the Star-Tribune article know it,” he told WND.

Guandolo said the Star-Tribune is incorrect in asserting that Shariah is “a daily guide” for Muslims.

“Shariah is law that comes with punishments from their god Allah in the Quran and their prophet Muhammad, who is the ‘perfect example’ for all Muslims to follow.”

The Star Tribune’s commentary that Shariah’s “interpretation and practice vary around the world” is also false, Guandolo said.

“While Shariah may be implemented in different stages in different areas, what Shariah is and what it says does not vary. There is one Islam and one Shariah. One-hundred percent of Shariah mandates warfare against non-Muslims until the world is under Shariah, and a ‘Muslim’ is one who submits to the Shariah. Ask the Hamas leaders like Jaylani Hussein of CAIR Minneapolis to produce one authoritative book on Shariah that says otherwise. He won’t because he can’t, because it does not exist.”

The community leaders are opposing Abdullah Rashid for one singular reason: He is infringing on their power in the community, Guandolo said.

“The Muslim Brotherhood runs that community, and Rashid is an outsider. That’s what is going on,” he said. “Law enforcement needs to understand the threat before this situation deteriorates, and they should begin by locking up the terrorist leaders from Hamas doing business as CAIR for being terrorists, and Rashid for imposing foreign law on citizens of Minnesota.”