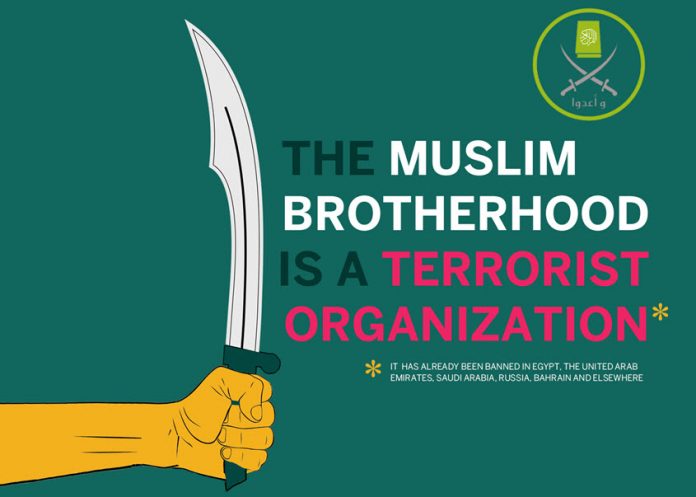 Source: Submitted to The United West, by Gerald Lostutter

Happy New Year, Muslim Brotherhood! You are not a terrorist organization, again, according to the U.S. Congress. That designation could be made by President Donald Trump, or Secretary of State Rex Tillerson, as explained below, but not so far! The bill, The Muslim Brotherhood Terrorism Designation Act, failed for two terms, 2015-16, and 2017-18.

Was there not any follow-up by the filers?

But there were so many co-sponsors!

(S.68) the Senate had 4 Republicans but no Democrats.

Did the bills get out of committees?

2015: The House’s Judiciary Committee voted in favor (17-10) as amended, but no action in Senate Judiciary’s Foreign Relations Committee; and worse,

2017: No action in Judiciary committees of both the House or Senate.

Were there substantive changes? The bill (2017) deleted the findings of facts from the bill (2015).

Please read this partial list of the facts. Its long, but important:

(1) – (7) Multiple countries have declared the Society of the Muslim Brothers ( … “Muslim Brotherhood”) a terrorist organization or proscribed the group from operating in their countries: Syria; Russian Supreme Court; Egyptian court and government; Kingdom of Saudi Arabia; Cabinet of the United Arab Emirates; and the previous two backed by the Foreign Minister of Bahrain.

(8) – (9) The Muslim Brotherhood, which was founded in Egypt in 1928 by Hassan al-Banna, remains headquartered in Egypt but operates throughout the world. [Its] motto includes … : “Allah is our objective. The Prophet is our leader. The Qur’an is our law. Jihad is our way. Dying in the way of Allah is our highest hope. [Allah is greater!]”.

(10) – (12) In The Way of Jihad, Hassan al-Banna taught: “Jihad is an obligation from Allah on every Muslim … Jihad [means] the fighting of the unbelievers … [and] to impose [Islamic] law on nations and to extend its power to the entire planet”. Indeed, violent jihad is the legacy: the art of death. See, The Society of Muslim Brothers, by Richard P. Mitchell.

(17) The United States has previously designated global elements of the Muslim Brotherhood as foreign terrorist organizations, including –

(A) the terrorist group Hamas, which self-identifies as “one of the wings of the Muslim Brotherhood in Palestine,” which was designated a foreign terrorist organization by President William J. Clinton on January 23, 1995, by Executive Order 12947, and by Secretary of State Madeline Albright on October 7, 1997, under section 219(a) of the Immigration and Nationality Act (8 U.S.C. 1189(a)); and

(B) the Kuwaiti Muslim Brotherhood’s Lajinat al-Daawa al-Islamiya (“Islamic Call Committee”), which was designated a foreign terrorist organization by President George W. Bush on September 23, 2001, by Executive Order 13224 and by Secretary of State Colin Powell on January 9, 2003, under such section 219(a).

During the trial and in court documents, Federal prosecutors implicated a number of prominent United States-Islamic organizations in this conspiracy, including the Islamic Society of North America, the North American Islamic Trust, and the Council on American-Islamic Relations. These groups and their leaders, among others, were named as unindicted co-conspirators in the case…

From the book, Muslim Mafia [p. 44; WND Books (2009)], P. David Gaubatz wrote: “CAIR is first mentioned by name in Brotherhood documents as part of the July 30, 1994, agenda of the Palestine Committee. This is the smoking gun linking CAIR directly to the Hamas network inside America.”

The bill, in both versions, has Sec. 2: “Sense of Congress” – effectively conclusions:

(1) the Muslim Brotherhood meets criteria for designation as a foreign terrorist organization under section 219 of the Immigration and Nationality Act (8 U.S.C. 1189); and

If the above is true and accurate, then why wait to designate the Muslim Brotherhood a terrorist organization? A few theories:

Theory #1: President Barack H. Obama and the Washington Establishment have been not just protectors of Muslims, but advocates in favor of Islam. During the 2008 Presidential campaign, Obama referred to his funny middle name, Hussein. A self-described Christian (but in practice of black liberation theology), Obama went out of his way to promote Islam. Google his speeches and policies. He continuously attacks Christianity, and elevates Islam. His administration refused to identify “radical  islamic terrorism.” Acts of Jihad were simply “workplace violence” by the mentally disturbed.

In a story, “The Muslim Brotherhood Comes to the White House,” by Jordan Schachtel on Breitbart.com [7 Feb. 2015]: The 14 Muslim “leaders” included the Islamic Society of North America [ISNA]; the Muslim Public Affairs Council [MPAC]; and the All Dulles Area Muslim Society [ADAMS].

Theory #2: The U.S. Government has Muslim employees, and meets with lobbyists from Islamic organizations. Obama’s administration – the FBI, DOJ, and Homeland Security – essentially embraced CAIR and other Muslim groups to monitor the government’s policies and manuals, changing the jargon:

Haney wrote [Ibid; pgs. 52-53]: “On February 12, 2008, a colleague of mine with Immigrations and Customs Enforcement (ICE) forwarded me an email string that originated within the DHS Office of Civil Rights and Civil Liberties. It included a draft of a policy paper titled ‘Terminology to Define the Terrorists: Recommendations from American Muslims.’ The document, which soon became known simply as the ‘Words Matter’ memo, was being circulated for internal review among subject matter experts in the counterterrorism community.”

A call to action: Your homework assignment during the holidays. The Trump Administration has yet to designate the Muslim Brotherhood as a Terrorist Organization. Breitbart News describes the objections: U.S. Secretary of State Rex Tillerson claims “The Brotherhood’s political parties have representatives in governments like those in Bahrain and Turkey … Tillerson also repeated the ‘non-violent’ and ‘moderate’ Muslim Brotherhood propaganda.” See, “Clarion: Tillerson Standing between Muslim Brotherhood and Terror Designation,” 28 July 2017, Breitbart.com.

You should write or call your representatives. Attached is a PDF of documents: This author’s letter, Aug. 9, 2017, to members of committees in the House and Senate; texts of The Muslim Brotherhood Terrorism Designation Act; and master listings of co-sponsors. Click [here].