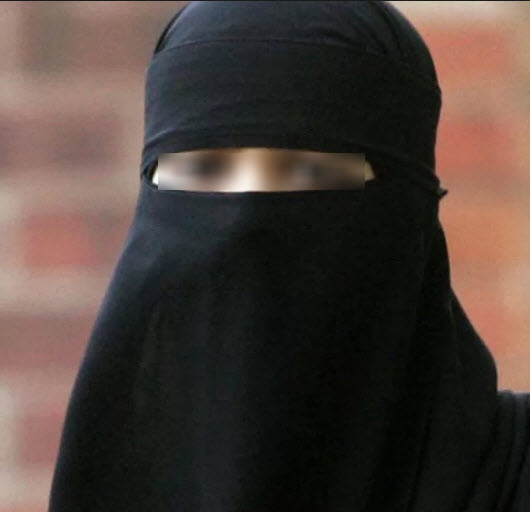 In the 2014 book Princess: More Tears to Cry by Jean Sasson, the protagonist, Princess Sultana Al’ Sa’ud of Saudi Arabia, recounts how “to this day there are teenage Saudi boys living in Riyadh who, taught by their fathers and the clerics, consider women to be second-class citizens and cast stones at what they consider to be an offensive sight – an unveiled female face.”

The princess asserts that it is her “sincere wish that the day will come when … an uncovered face will not cause violence in the street.”  She declares that “nothing reveals more to [her] of a young woman’s personality than the will to fight against any injustice against women, and certainly something as personal as the face veil, which is not required by the Islamic faith, as all those who are truly familiar with our holy book will know.”

She relates a tale of a young girl in a poor hamlet in Al-Kharz who aspired to be a doctor.  As she was the last of four daughters, this resulted in her father saying to his wife, “I divorce you” three times (Quran 2:222-286), and the deed was done.  The baby’s mother, who had just given birth, witnessed her now ex-husband grab the newborn baby, shouting that he was going “to bury [her] alive in the desert.”  He wanted to take the “infant into the desert, where he would have scooped sand with his hands until he had created a hole large enough to hold a tiny baby, and then he would have pushed that sand over the baby so that she would have sucked sand rather than air into her lungs until she had died an agonizing death.”  He then “shouted for his three older daughters to line up and wait for his return as he was going to throw those three in the village well.”

Fortunately, an uncle to the little baby intervened and asked that the father pass the newborn to him; instead, the newborn was “tossed on the dirt floor” while her father left.  Since her father did not insist upon custody of his daughters, the unwanted child had a sliver of a chance at life.  In Saudi Arabia, “if a man claims custody from the first day of a child’s birth, no one will defy the father.”  Had the infant’s father “demanded guardianship, no one would have stood in his way,” and he would have murdered all his daughters.

This family’s ordeal was far from over.  The baby’s grandparents demonstrated intense animosity to their daughter and her children.  Although illiterate, this now single mother instinctively understood that if “females are forced to be ignorant, then the women have no alternative but to live the life of a slave to a man.”  As she recounts the bravery and perseverance of her mother, the grown-up Dr. Meena explains that although she is “the daughter of a woman who could not write her name, she is a doctor who has the training and skills to save lives.”

There are changes afoot in the Arab Middle East, and they will come about because of the tenacious fearlessness of women such as Dr. Meena’s mother.

In Iran, heroic women, “by risking their lives, have unmasked the faces of those trying to promote burqas and hijabs as supposed ‘symbols of liberation.'”  Yet these shackles  are the very ones the Council on American Islamic Relations, or CAIR, and the likes of Linda Sarsour continue to promote.  Western women would do well to speak out against any individual or organization who wishes to impose sharia’s anti-woman regulations, no matter how enticing the speaker sounds.

It is instructive to see what Iranian women wore before the 1979 revolution.  In December 2017, Iranian officials stated that “women will no longer be arrested for not wearing a hijab.”  Instead, women who do not wear the hijab in public “will be forced to attend Islam educational classes.”

Qanta Ahmed, who was raised as an observant Muslim in a British family, strongly supports “the right to ban the veil.”  Wearing of the veil is “what happens when Islamists are tolerated by a [W]estern culture that’s absurdly anxious to avoid offen[s]e.  This strange, unwitting collaboration between liberals and extremists has been going on for years.”  Her medical career took her to Saudi Arabia for two years, where she “was mandated by law to wear the hijab, covering all of [her] hair and neck.”

For … two years, I became intimately acquainted with the cumbersome nature of forced veiling and its impracticality – even seeing it imposed upon my unconscious female patients.  Where the veil is mandatory, a kind of oppression is implemented: an oppression that has absolutely no basis in Islam.

In fact, “rigid interpretations of the veil are a recent invention.”  They are not derived from the Quran, but have become a “form of misogyny which claims a false basis in the divine.”

Instead of fighting alongside these Muslim women, far too many Western feminists join Islamist terrorists.  Not only do they remain mute, but their presence at certain events “actively endorses and legitimizes the rule” of those who wish to keep women oppressed.  How tone-deaf is Federica Mogherini, the high representative of the European Union for foreign affairs and security policy, who visited Iran?  In fact, “[w]hen Mogherini smiles in her hijab in Iran, she is delivering a strong blow to women[‘s] rights movements [as they] attempt to remove the compulsion of the obligatory hijab and grant women equal autonomy, education[,] and freedom.  She is empowering suppression.”

Yasmin Alibhai-Brown writes that “[a]s a practi[c]ing (though flawed) Shia Muslim, [she watches] … with apprehension.  So too other Muslims worldwide, the silent many, watch and tremble.”  Alibhai-Brown writes “about Qasim Amin who in 1899 wrote ‘The Liberation of Women.’  He was the John Stuart Mill of the Arab world.”  In the early 1920s, Egyptian women and educated Iranian women began feminist magazines and “campaigned against the veil,” yet these people “have been written out of  history or are dismissed as [W]estern stooges by some contemporary Muslim intellectuals.”  In Morocco and Pakistan in the 1960s, there were those who “rightly saw the veil as a tool and symbol of oppression and subservience.”  For Alibhai-Brown, “the veils represent both religious arrogance and subjugation; they both desexuali[z]e and fervidly sexuali[z]e.”  Hence, “a veiled female … represents an affront to female dignity, autonomy[,] and potential.”

She demands that those who do veil consider women in Iran, Saudi Arabia, Afghanistan, Pakistan, Iraq, and even the West, who are prosecuted, flogged, tortured, and killed for not complying.  In fact, those “who are forced[] cannot speak out.”  How many feminists understand that “sexual violence in Saudi Arabia and Iran is appallingly high, as is body dysmorphia”?  But is this any surprise when an imam in Falls Church, Virginia asserts that painful female genital mutilation (FGM) is a means to “prevent women from being ‘hypersexual'”?

Female abuse is rampant.  Child marriages among migrants from the Middle East, Asia, and Africa are escalating in Denmark, Sweden, and Germany with girls as young as eleven being married off.  Polygamy, while illegal in Europe, is proliferating as many immigrants bring multiple wives and children with them.  Britain’s first female Islamic judge said, “[T]he [British] government cannot … ask Muslims not to have more than one wife.”

“Disobedient” wives undergo beatings as well as being burned alive all in the name of sharia.  In 2017, an Iranian child bride was beaten by her husband and forced to give up her children.  She fled to Australia.  She revealed that “a person who [decides to convert] in Iran will be deemed an apostate and the punishment is death.”  She explains that she “hated Islam and its regressive laws in Iran … a religion with no value or respect for women.  It recogni[z]es women as only a means of sexual pleasure for men.”

Instead of speaking out against such repression and violence, the fashion world is now turning the Islamic veil into a “global garment.”  Mattel “unveiled” the world’s first hijab-wearing Barbie doll.  Dolce & Gabbana is producing a collection of hijabs and abayas to Muslim customers in the Middle East.  Playboy had a Muslim woman wearing a hijab.  Nike released a performance hijab outfit for athletes.

Why should Western society in any way, shape or form promote any symbol of Islamic tyranny?  Would a Nazi doll have been promoted in the 1940s?  Greed, ignorance, and indifference aptly describe these corporate decisions.

We, who are fortunate to live in the West, are morally obligated to unequivocally state that “instead of embracing these veils, a true feminism should defend the rights and freedoms of all women.”  We should not support anything that endorses the repression of women.