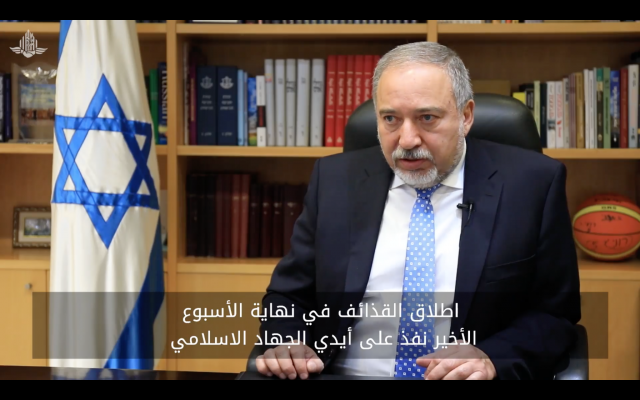 Source: The Times of Israel, By JUDAH ARI GROSS 4 January 2018

Defense Minister Avigdor Liberman accused the Iran-backed Palestinian Islamic Jihad terrorist group of carrying out a recent mortar shelling of southern Israel, warning that Israel will do “anything we have to” in order to prevent future attacks.

“Friday’s shelling was conducted by the  Islamic Jihad, and we know who specifically was behind it,” Liberman said in an Arabic-subtitled video posted on the Facebook page of Israel’s military liaison to the Palestinians.

“We will do anything we have to do to stop this. We will not accept ‘drizzles,’” he said, using a slang term for sporadic, but persistent rocket and mortar fire.

On Friday, terrorists in Gaza fired three mortar shells at southern Israel, apparently to disrupt a ceremony honoring Oron Shaul, a fallen IDF soldier whose remains are being held captive in the coastal enclave. 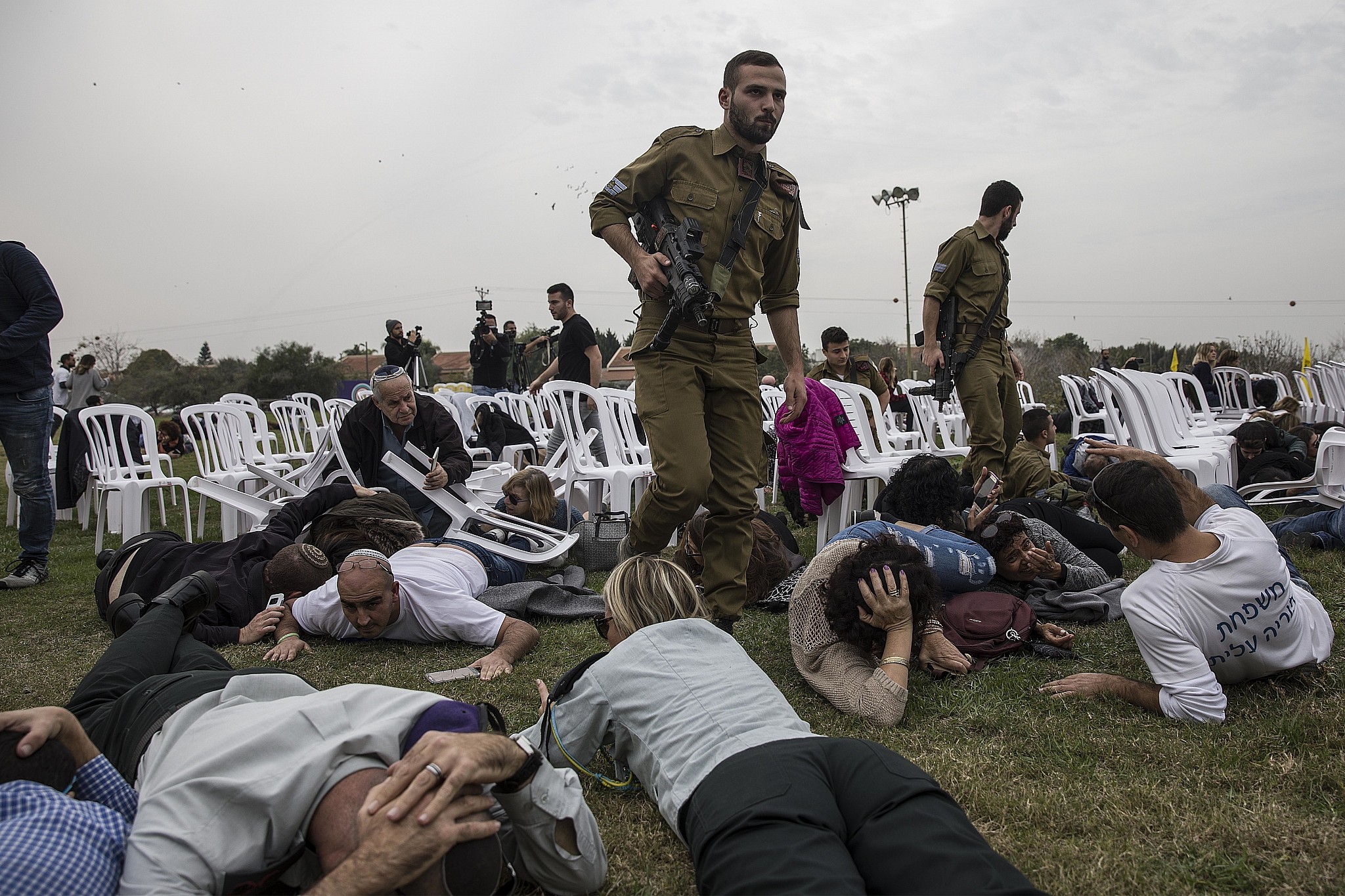 Israelis take cover during a mortar attack siren warning at Kibbutz Kfar Aza, near the Israel and Gaza border, Israel, December 29, 2017. Israelis had gathered there to mark the birthday of Oron Shaul, who was killed during the last war in Gaza; Hamas holds his remains. (AP Photo/Tsafrir Abayov)

Two of them were intercepted by the Iron Dome air defense system, while the third fell in Israeli territory in the Shaar Hanegev region, on the Gaza border.

Police said they found the shell at the entrance to a building that had sustained damage from the fire.

Shortly after the rocket barrage, the IDF retaliated by attacking two Hamas positions with tank shelling and strikes from aircraft.

In Thursday’s video, Liberman also warned the Hamas terrorist group, which rules that Gaza Strip, that it should “come to its senses” and prevent Islamic Jihad from carrying out attacks, or risk the consequences. 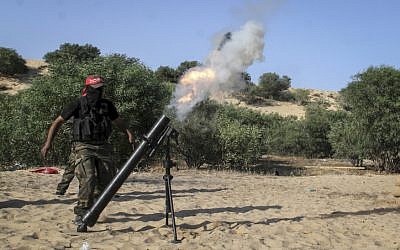 Illustrative. Palestinian terrorists fire a mortar shell during a graduation ceremony in Rafah in the southern Gaza Strip, on May 29, 2015. (Abed Rahim Khatib/Flash90)

“We encourage the authorities in Gaza to come to their senses and bring about order. In our view, there is only one address: The one that says its the ruler of Gaza is also the one that will deal with the responsibility,” the defense minister said.

“But we well know who’s responsible for the launches,” he added.

The interview is the second in under a week Liberman has done for the Coordinator of Government Activities in the Territories (COGAT). Posted to the liaison’s Arabic Facebook page, the video’s audience is Palestinians living in the Gaza Strip and, to a lesser extent, the West Bank.

In addition to threatening the Palestinian Islamic Jihad over Friday’s attack, Liberman also appeals to Gaza’s civilians, telling them vast amounts of money are being stolen from them for terrorist activities and encouraging them to get Hamas and other groups to make peace with Israel.

“In recent months, millions of dollars have been smuggled to Hamas’s military wing. Instead of investing money in water, electric and sewage infrastructure, all the money is going into digging tunnels and manufacturing rockets,” the defense minister said. 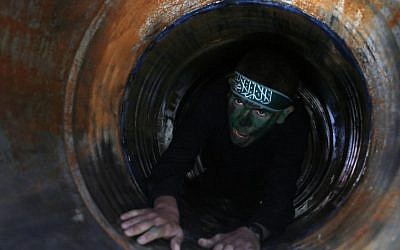 A Palestinian youth crawls in a tunnel during a graduation ceremony for a training camp run by the Hamas movement on January 29, 2015, in Khan Yunis, in the southern Gaza Strip. (AFP photo/Said Khatib)

“The moment Hamas stops building up its arsenals — and I’ve said this a number of times — we become the partners helping turn Gaza into the Singapore of the Middle East,” he said.

“Reconstruction in exchange for demilitarization — that’s the future of Gaza,” Liberman said.

The defense minister also reiterated a claim a made in his last video for COGAT, that Hamas and Islamic Jihad have become a puppet for Iran and therefore do not represent the Palestinian people.

“Unfortunately both Hamas and the Palestinian Islamic Jihad have simply become marionettes, proxies for Iran — and that’s something the residents of Gaza should think about,” Liberman added.

The defense minister called on Gaza residents to “take responsibility for their fate and force the leaders of the Strip to change direction for the sake of their children.”

On Saturday, Liberman released a similar video aimed at Palestinian civilians for COGAT, but that one focusing more on Iran’s involvement in the Strip.

“After the Iranians completely destroyed Yemen, Sudan, Lebanon and Syria, they are starting to do the exact same thing in Gaza,” Liberman said.

“The heads of the regime in Tehran are not interested in the depressing reality in Gaza nor in the future of the children there. They care about their extremist ideology and hurting Israel as much as possible,” he said.

The defense minister also noted that while the vast majority of Gaza Strip residents only have access to electricity between four to six hours a day, the leaders of Hamas — Yahya Sinwar and Saleh al-Arouri — have power 24 hours a day.

Since becoming defense minister last year, Liberman has maintained a policy of “sticks and carrots” as it relates to the Palestinians. Regarding Gaza, where there is widespread unemployment, he has said that he would be prepared to allow residents of the Strip to work in Israel, if the security situation were calmer.