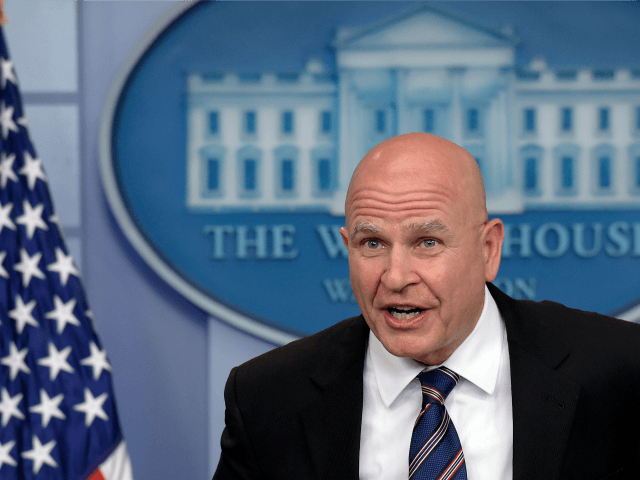 In a BBC radio interview posted online on Wednesday, McMaster was asked about the U.S. fight to rid the region of the Islamic State.

And so what has to happen is a removal of these drivers of conflict. And that means defeating these jihadist terrorist organizations so that they can’t come back. That means denying them control of territory, populations, resources. Drying up their financing. But then also defeating their wicked ideology to expose their ideology as irreligious and illegitimate. And then it also involves addressing Iran’s destabilizing behavior in the region.

The comments mark the latest time McMaster has downplayed or altogether denied the radical Islamic nature of Islamic terrorism.

In November, after Sayfullo Saipov plowed into a crowd of pedestrians and bicyclists in Lower Manhattan, killing eight people, McMaster referred to the attack as among a grouping of “mass murderers.”

This despite reports  Saipov left behind a note declaring that the attack was perpetuated in the name of the Islamic State.  And witnesses heard Saipov shout “Allahu Akbar!,” Arabic for “Allah is great,” during the terrorist assault.  IS claimed responsibility for the attack.

One month earlier, McMaster labeled the September 11, 2001, Islamic terrorist attacks “mass murder attacks,” instead of calling them acts of terrorism.

In February, CNN cited a source inside a National Security Council meeting quoting McMaster as saying that use of the phrase “radical Islamic terrorism” is unhelpful in working with allies to fight terrorism.

In May, McMaster spoke on ABC’s This Week about whether Trump would use the phrase “radical Islamic terrorism” in a speech that the president was about to give in Saudi Arabia. “The president will call it whatever he wants to call it,” McMaster said. “But I think it’s important that, whatever we call it, we recognize that [extremists] are not religious people. And, in fact, these enemies of all civilizations, what they want to do is to cloak their criminal behavior under this false idea of some kind of religious war.”

Breitbart News unearthed a 2014 speech about the Middle East in which McMaster claimed that Islamic terrorist organizations are “really un-Islamic” and are “really irreligious organizations” who cloak themselves in the “false legitimacy of Islam.”

Delivering the keynote address at last April’s Norwich University ROTC Centennial Symposium, McMaster criticized “modern-day barbarians like Daesh and al-Qaeda who cynically use a perverted interpretation of religion to perpetuate ignorance, incite hatred, and commit the most heinous crimes against innocents.”

Breitbart News also reported that McMaster endorsed and touted a book that frames jihad as a largely peaceful “means to struggle or exert effort,” such as waking up early in the morning to recite prayers. It argues that groups like al-Qaeda and other terrorist organizations have hijacked the concept of jihad to wage warfare using such tactics as suicide bombings.

That same book calls Hamas an “Islamist political group” while failing to categorize the deadly organization as a terrorist group and refers to al-Qaeda attacks and anti-Israel terrorism as “resistance.”