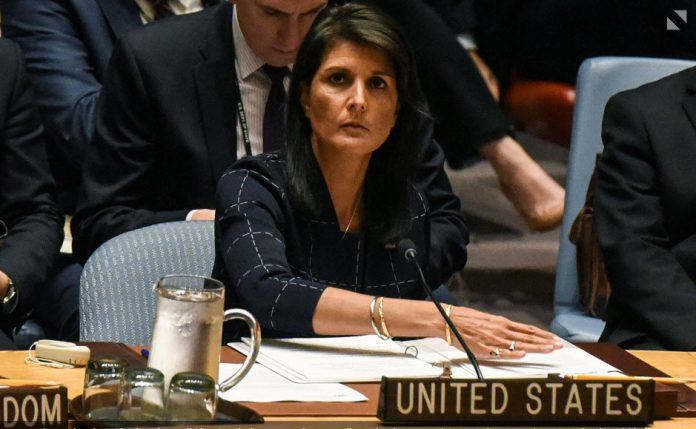 Cut the budget, stand for freedom, support our allies, reward our friends, and defund our enemies.

President Trump and United Nations Ambassador Nikki Haley made a lot of news last week with their condemnations of the United Nations over a U.N. General Assembly (UNGA) resolution criticizing President Trump’s decision to recognize Jerusalem as the capital of Israel and move the U.S. embassy there.

Although these comments didn’t represent anything new — U.S. officials have lamented the U.N.’s anti-Israel and anti-U.S. bias for decades — they were still very significant, since they involve the United States’ holding the United Nations accountable again after a 25-year hiatus.

As a CIA U.N. analyst from 1986 to 1994, I remember well the intense focus by the Reagan and George H. W. Bush administrations to punish U.N. members who voted for anti-U.S. and anti-Israel resolutions. Nations were given scores on their support of the United States in the U.N., which were used to determine U.S. aid.

For example, in 1990, after Yemen voted against a U.N. Security Council resolution authorizing the use of force against Iraq in response to its invasion of Kuwait, Secretary of State James Baker told Yemen’s U.N. ambassador, “That was the most expensive ‘no’ vote you ever cast.” Several days later, a $70 million U.S. aid program to Yemen was halted.

There also was a push during this period to curtail the use of the U.N. for espionage against the United States by hostile powers, especially the Soviet Union. In addition, U.S. diplomats fought to lower the U.S. contribution to the U.N. and to address the organization’s epic corruption and inefficiency.

In 1991, then–assistant secretary of state John Bolton scored a huge win against anti-Semitism and animus toward Israel in the U.N. with his successful campaign to persuade the U.N. General Assembly to rescind its odious 1975 resolution that equated Zionism with racism.

While I was providing intelligence support to Bolton for his campaign to rescind the U.N. Zionism/racism resolution, I learned that his main challenge was not twisting the arms of foreign leaders; it was fighting with State Department careerists who did not want to upset Arab countries and seemed to have their own biases against the Jewish state. This problem continues today, and it is why President Trump must fill vacant State Department positions ASAP with people who will defend his policies.

This twelve-year campaign against U.N. bias and mismanagement by two Republican administrations ended with the Clinton administration, which took a “see no evil” approach to the U.N. and adopted a policy called “assertive multilateralism,” which tried to end civil wars with U.N. peacekeeping and used U.S. soldiers as peacekeepers. I explained in my 2002 book Peacekeeping Fiascoes of the 1990s how this policy led to a string of major peacekeeping failures in the former Yugoslavia, Haiti, and Somalia.

The George W. Bush administration ended the Clinton administration’s naïve approach to the U.N. However, with one notable exception — John Bolton’s 18-month tenure as U.N. ambassador — this administration showed little interest in addressing anti-U.S. and anti-Israel animus in the organization or pushing for U.N. reform.

(An important related point: One of the worst George W. Bush administration officials who worked on U.N. issues — Brian Hook, who served as assistant secretary of state for international organizations — was brought back to the State Department by Secretary Rex Tillerson and reportedly runs the department for Tillerson as director of the policy-planning staff.)

Israeli officials accused President Obama and Secretary of State John Kerry of abandoning Israel by this vote. The Palestinians declared a “day of victory.” Israel officials also claimed to have “hard evidence” that U.S. diplomats drafted this resolution, a charge Obama officials denied.

Although the extreme anti-Israel and anti-U.S. bias in the U.N. of the Cold War days is long over, the organization is still working against American interests, a situation made worse by the naïve U.N. policies of the Clinton and Obama administrations and the general neglect of the U.N. by the George W. Bush administration.

Thus President Trump inherited another foreign-policy mess at the United Nations. So what should Mr. Trump do about the U.N.? Conservative experts are divided.

Some believe the United Nations is so anti-American and flawed that the U.S. should withdraw from the organization. I oppose this option because I believe the U.N. still has value as a venue to peacefully resolve international disputes.

Although Ambassador John Bolton is not calling for the U.S. to completely pull out of the U.N., he argued in a December 26 Wall Street Journal op-ed titled “How to Defund the UN” that President Trump should withdraw from and stop funding U.N. bodies that do not serve U.S. interests. Bolton also called for major budget cuts to the U.N. bureaucracy and replacing America’s assessed contributions to fund the U.N. — which is essential a mandatory bill foisted on Washington by U.N. members — with voluntary contributions under which the U.S. would pay only for U.N. expenses that it supports.

Ambassador Haley is already working to cut U.N. spending, and she announced last week that she has negotiated a $285 million reduction in the U.N.’s 2018 budget. Although this was a good start, next year’s U.N. budget will be about $5.2 billion, so Haley must work to extract much larger cuts.

Holding U.N. members and the U.N. bureaucracy accountable for their votes and actions must be part of the Trump U.N. policy. While Trump officials have already said they may deny aid to states that vote against the United States, there are many similar steps they should take to punish the U.N. and its members for actions that violate the principles of liberty and freedom on which the organization was founded.

Meanwhile, some Muslim states want to uproot modern principles of human rights by passing a U.N. resolution to amend the Universal Declaration of Human Rights to make it compatible with sharia law by removing language on the right of a person to change his religion and adding new language banning the “defamation” of religions.

President Trump must make clear that the United States will no longer tolerate U.N. votes and actions that violate our principles of freedom and democracy and will take retaliatory steps in response when necessary.

The Trump administration also should turn the tables on anti-U.S. and anti-Israel bias in the U.N. by aggressively using the Security Council against rogue states like North Korea and Iran. The administration already has been successful in doing this against North Korea by winning unanimous approval of several resolutions imposing the stiffest sanctions ever in response to its nuclear weapons and missile program. Growing concern by European states about the Iranian missile program could lead to similar resolutions against Iran over the next few years.

At the same time, Trump officials need to realize that since the U.N.’s globalist diplomats and bureaucrats will never agree to most of America’s demands, they need to focus on those that are doable. A priority should be ensuring that America’s allies stand with it in the U.N. as a united bloc for freedom and international security. Based on the shameful decision by the United Kingdom, France, Germany, Italy, Japan, South Korea and many other U.S. allies to vote for last week’s UNGA resolution on President Trump’s decision to move the U.S. embassy to Jerusalem, it is clear that Ambassador Haley has her work cut out for her.

— Fred Fleitz was chief of staff to Under Secretary of State John Bolton from 2001 to 2005. He served in national-security positions for 25 years with the CIA, the DIA, the State Department, and the House Intelligence Committee staff. He is now senior vice president of the Center for Security Policy.