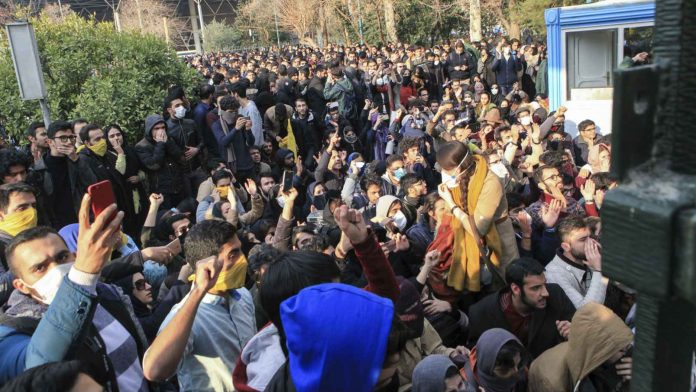 What’s behind their social, political, and even economic grievances.

What began on December 28 as local protests against high food prices in the northern city of Mashhad, Iran, has spiraled into mass protests consisting of some hundreds of thousands of Iranians in some two dozen cities, including if not especially Tehran, the seat of government.  So far over 20 people have been killed and many hundreds arrested in what has been widely described as “the most serious internal crisis the country has faced this decade.”

The protests have morphed from mundane topics concerning the economy to more existential topics concerning Islamic leadership. Reportedly hundreds of thousands of protesters have been heard shouting “We don’t want an Islamic Republic,” and calling blessings on Reza Shah, the staunch secularist and political reformer who did much to Westernize Iran, until his son and successor, Muhammad Reza Shah was deposed during the Islamic Revolution of 1979.   According to Mideast media, women—such as Maryam Rajavi—are spearheading the current protests (and symbolically rejecting Islamic impositions by publicly removing their hijabs).

Even the Iranian regime sees the current unrest as a revolt against Islam.  In his initial remarks after demonstrations first erupted, Supreme Leader Ayatollah Khamenei said, “All those who are against the Islamic Republic … have all joined forces in order to create problems for the Islamic Republic and the Islamic Revolution” (note the recurrent and telling adjective “Islamic”).

Even so, “mainstream media” see growing poverty and frustration at the lack of social freedoms as the onlyreasons behind the current unrest.  Overlooked in their analysis is that, because Islam is not meant to be a “spiritual thing” one does privately, but is rather a complete system of governance, permeating the whole of private and social life, the ongoing protests in Iran, while ostensibly revolving around economic, social, and political issues, are ultimately protests against Islamic teachings concerning economic, social, and political issues, which the Islamic Republic of Iran has been imposing on the populace since coming to power in 1979.

This is evident even in the new rallying cry of the protestors—“Death to the Dictator”—in reference to Supreme Leader Ayatollah Ali Khamenei himself.  By its very nature, Islamic law—both Sunni and Shia—calls for dictatorial rule.  So long as the caliph, sultan, or emir governs society according to Sharia, Muslims must obey him—even if he is a despicable and cruel personage.  After examining a number of Islamic rulings from authoritative exegetes, as well as a number of statements attributed to Muslim prophet Muhammad and in the Koran concerning the importance for Muslims to follow Islamic law—which is the only relevant question of when Muslims should and should not seek to overthrow their ruler—Ayman al-Zawahiri writes,

To summarize: It is forbidden to overthrow a tyrant, but it is a duty to overthrow an infidel. If the ruler is despotic, it is unlawful for a Muslim to rally other Muslims in order to condemn him, for if they do so then they become the aggressors and it becomes incumbent for the sultan to fight them (Al Qaeda Reader, p. 122).

As it happens, the social oppression currently being protested against in Iran—from second-class status for women, to bans on all forms of expression critical of Islam, its prophet, and his representative on earth—is mandated by Islamic law, making the protestors “the aggressors.”

But even the economic aspects of the protests are largely by-products of Islamist aspirations.  As Donald Trump tweeted last Friday, the Iranian “people are finally getting wise as to how their money and wealth is being stolen and squandered on terrorism. Looks like they will not take it any longer.” Indeed, the economic suffering of the people has come at a time when the regime has grown rich—not least by Obama giving them over $100 billion as part of a nuclear deal.  The reason for this disparity is that the regime has been and continues to spend much of its wealth in trying to realize its stated Islamic ideals; it prefers supporting Hezbollah (currently Forbes wealthiest terrorist organization) and Hamas (third wealthiest) against the nearest “infidel” enemy, Israel, in the name of and for the greater glory of Islam, rather than feed its people.

Incidentally, because the right to protest is a given in the West, and thus occurs often, including over trivial and/or absurd matters—as when university students planned a “sh*t-in,” occupying restrooms as a way of demanding more “gender-neutral facilities”—the grave consequences of the current protests in Iran are indicative of just how fed up Iranians are—and the fatal risks they are willing to take—which, unsurprisingly, also trace back to Islam:

Protesters could also potentially face the death penalty when their cases come to trial, according to the head of Tehran’s Revolutionary Court, the AP reported. Iran’s semiofficial Tasnim news agency quoted Mousa Ghazanfarabadi as saying: “Obviously one of their charges can be Moharebeh,” or waging war against God [Allah], which is a death penalty offense in Iran.

Moharebeh is precisely what al-Zawahiri was referring to in the above excerpt: the only legitimate reason to overthrow an Islamic ruler is his failure to govern according to Islam—which Khamenei and his regime can hardly be accused of. Seeking to depose him because he is personally corrupt, despotic, cruel, or spending more money on jihad than food is forbidden, and makes the protestors aggressors against Allah, a crime worthy of punishment, including death.

The Ahmadis: Sex and Sharia

Islam in Conflict with the Constitution: Holding Muslim Public Officials Accountable to the 1st Amendment

Islam in Conflict with the Constitution: Holding Muslim Public Officials Accountable to the 8th Amendment