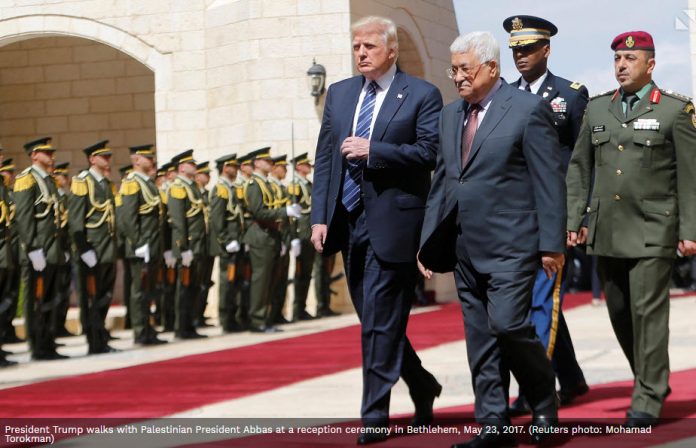 By cutting off hundreds of millions in American aid to the Palestinian Authority, the president could radically alter the Middle East.

President Trump set off another Twitter firestorm last week when he hinted that he may be considering cutting off hundreds of millions of dollars in annual U.S. aid to the Palestinians. Trump was angered over Palestinian unwillingness to engage in peace talks with Israel after the Trump administration announced the move of the U.S. Embassy in Israel to Jerusalem.

Given that the U.S. channels its Palestinian aid through third-party United Nations organizations, it’s unclear how much money Trump is talking about it. But in total it may exceed $700 million per year, according to reports.

A decade ago, the U.S. row with the Palestinian Authority would have been major news. But not now.

The entire Middle East has radically changed — and along with it the role and image of the Palestinians.

First, the U.S. is now one of the largest producers of fossil-fuel energy in the world. America is immune from the sort of Arab oil embargo that in 1973–74 paralyzed the U.S. economy as punishment for American support of Israel. Even Israel, thanks to new offshore oil and natural-gas discoveries, is self-sufficient in energy and immune from Arab cutoffs.

Second, the Middle East is split into all sorts of factions. Iran seeks to spread radical Shiite theocracy throughout Iraq and Syria and into the Persian Gulf states — and is the greatest supporter of Palestinian armed resistance. The so-called “moderate” Sunni autocracies despise Iran. Understandably, most Arab countries fear the specter of a nuclear Iran far more than they do the reality of a democratic and nuclear Israel.

A third player — radical Islamic terrorism — has turned against the Arab status quo as well as the West. Because Palestinian organizations such as Hamas had flirted with Iran and its appendages (such as the terrorists of Hezbollah), they have become less useful to the Arab establishment. The terrorist bloodlettings perpetrated by groups such as the Islamic State and al-Qaeda have discredited terror as a legitimate means to an end in the eyes of the Arab world, despite previous support for Palestinian terrorists.

Third, the world itself may have passed the Palestinian issue by.

Israel was founded in 1948. Palestinian rhetoric that they would push the Jews into the sea is by now stale. There have been seven decades of failed intifadas and suicide-bombing campaigns, along with full-scale Arab–Israeli wars.

Equally futile were endless “peace processes,” “peace initiatives,” “road maps,” and “multiparty talks,” plus Middle East “conferences,” “summits,” and “memoranda” all over the world, from Madrid and Oslo to Camp David.

In the meantime, most other “refugees” the world over have long ago moved on. Around the time Israel was created, some 13 million German speakers were ethnically cleansed from East Prussia and Eastern Europe. The word “Prussia” no longer exists as a geographical or national label. Seven decades later, the grandchildren of refugees do not replay World War II. “Prussians” do not talk about reclaiming their ancestral homelands in present-day Poland, Hungary, and the Czech Republic. German-speaking youth do not demand a “right of return” to their grandparents’ homes to the east.

Fourth, the Palestinians have never been able to craft a successful, transparent, consensual government. After 30 years of waiting, the world has mostly given up on their rhetoric of self-government and reform on the West Bank.

Since the Palestinian proclamation of independence in 1988, there have been only two “presidents”: Yasser Arafat and Mahmoud Abbas. Neither has allowed open and transparent elections. A Palestinian president gets power by seizing it. He loses it only by dying in office. Over the same period, Israel has elected seven different prime ministers from a variety of political parties.

The Palestinian political party Fatah is engaged in a deadly rivalry with the terrorist-inspired Hamas organization that has run Gaza for over a decade. The beef is not over democracy, but over which faction will bury the other.

The Palestinians’ inability to rule the West Bank in constitutional fashion is why hundreds of thousands of expatriate Palestinians voice their solidarity from a safe distance while living in North America or Europe. More than a million Palestinians prefer to stay put in Israel. They are convinced that they will have more security, freedom, and prosperity in a democratic state than under dictatorial Palestinian rule a few miles away.

Trump may be rash and unfamiliar with the stagnant Middle East peace process, but his political instincts are probably correct. Polls show that less than 20 percent of Americans support the Palestinian cause. Many U.S. citizens are tired of subsidizing those who claim that they do not like their benefactors in the United States.

It finally may be time for the Palestinian factions to fund their own causes and go their own ways.

— Victor Davis Hanson is a classicist and historian at the Hoover Institution, Stanford University, and the author of the recently released The Second World Wars: How the First Global Conflict Was Fought and Won. © 2018 Tribune Content Agency, LLC.

Chicago-Based Islamic Scholar on Coronavirus Pandemic: Muslims in the U.S. Should...