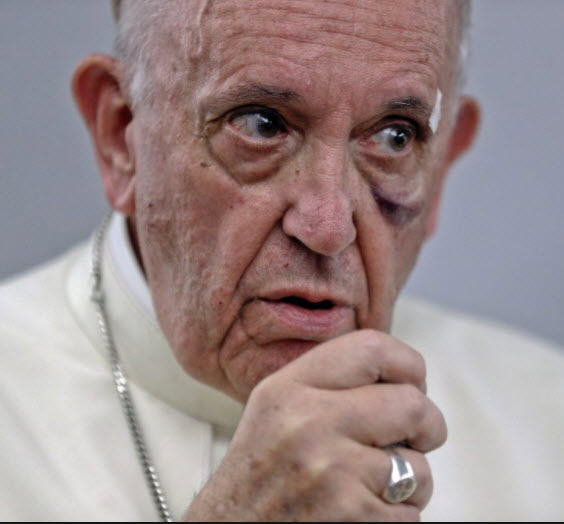 Well, despite the anxious expectations of some, the world didn’t erupt in a hurricane of fire in 2017, a year marked by several historic anniversaries: Protestantism (500th), Freemasonry (300th), Communism (100th), and the apparitions of Our Lady of Fatima (100th).

But unlike Trads who are expecting apocalyptic signs of doom, gloom and World War III (which we may already be witnessing), I see the destruction of Western Civilization, the Church and the fulfillment of Our Lady’s “annihilation of nations” prophecy a little more subtly. I’m no prophet, but Pope Francis has been working hard at fulfilling all of these ends while we were on holiday.

Let’s start with the most recent incident, shall we? The occasion was the Pope’s New Year’s Day address and, honestly, if I didn’t already know the words were his, I might have mistaken the quote for something Tweeted by Edward “Emily” Gorcenski, a homosexualist, transexualist, “anti-Racist” activist from Virginia.

In honor of the 51st World Day of Peace (Jan. 1), the Pope addressed the topic of “Migrants and refugees: men and women in search of peace,” during which he stated:

“Many destination countries have seen the spread of rhetoric decrying the risks posed to national security or the high cost of welcoming new arrivals, and thus demeaning the human dignity due to all as sons and daughters of God. Those who, for what may be political reasons, foment fear of migrants instead of building peace are sowing violence, racial discrimination and xenophobia, which are matters of great concern for all those concerned for the safety of every human being.”

Several of his remarks, even within this brief excerpt, demand a response:

The following is a non-exhaustive (repeat, NON-exhaustive) list of “terrorist” (Islamic jihad) attacks committed in, and against the West, over roughly the past 16 years, beginning with the most recent:

It seems Pope Francis has spent all of his “compassion” on the ideological brothers and sisters of the jihadis and is fresh out of actual compassion for the untold thousands of victims – those who have been murdered, raped, mutilated, or otherwise terrorized by adherents of the “religion of peace.”

The Pope, like most other radical Leftists, is completely blind to the very grave and serious threat against Western society posed by Islam, with its creeping Sharia law and its fundamental incompatibility with our already established societies.

The fact that Francis and the Left, in general, seem completely unable to admit these terror attacks are real, becoming more frequent and painful to the victims, as well as their families and friends, is incredibly frustrating for me, so we’re going to move on to the next point.

2) “… demeaning the human dignity due to all as sons and daughters of God.”

Being human does not automatically make one a son or daughter of God. Yes, every human person is made in His image and likeness (cf. Gen. 1:27, Jam. 3:9), but because of original sin we are “by nature children of wrath” (Eph. 2:3). The only remedy for our fallen state is the reception of supernatural grace, which, as the Council of Trent teaches, involves:

“a translation from that state in which man is born a child of the first Adam to the state of grace and of the ‘adoption of sons’ [Rom. 8:15] of God through the second Adam, Jesus Christ, our Savior; and this translation, after the promulgation of the Gospel, cannot be effected except through ‘the laver of regeneration’ [Tit. 3:5], or a desire for it, as it is written: ‘Unless a man be born again of water and the Holy Ghost, he cannot enter into the kingdom of God’ [John 3:5].” (Decree on Justification, Denz. 796)

In other words, unless one “believeth and is baptized” (Mark 16:16) into the Mystical Body of Christ – the One, Holy, Catholic, and Apostolic Church – (or at least believes in Christ and desires baptism), he or she is not a child of God. This is not a slight against non-Catholics; it is a divinely revealed truth that must be taken seriously.

Since we’re quite sure that most of the “refugees” invading Europe do not meet the above criteria, I’m not sure what dignity Pope Francis is worried about demeaning. Certainly, there are basic courtesies we should afford to everyone, regardless of their religion, ethnicity, social status, etc. I don’t spit in the face of my bartender, for example, because she happens to be a radical feminist (I even go out of my way to tip well!). And we shouldn’t needlessly offend people by telling them that if they’re not Catholic they’re going to hell. These, of course, are courtesies not afforded to Christians in the Arab world, something which even the ultra-liberal Huffington Postadmits.

So in the wake of the very real threat which Islam poses to the West, and the even greater risk of losing our very identity in Western Europe – indeed, losing Western Civilization itself, due to the incredibly high birth rates of Muslims – we need to stop worrying about offending certain identifiable groups of foreigners (read: Muslim invaders) and start asking ourselves: “Are we committing cultural and ethnic suicide right now?”

3) “…foment fear of migrants instead of building peace are sowing violence, racial discrimination and xenophobia…”

The people who are fomenting fear of migrants are the migrants themselves. Every new attack, every new rape, every new bomb, every single threat made by migrants foments fear.

The people who are sowing violence are the migrants themselves. See the above list of terror attacks, not to mention all the attacks that were discovered and terminated by our (uncomfortably large and out-of-control) intelligence agencies. I mean, just look at this headline from Newsweek magazine: “Muslim Anti-Semitism Threatens France’s Democracy.”

Xenophobe. Racist. Pope Francis just threw out two of the Left’s most common insults, normally reserved for Republicans. Too bad the Pope left out all the other good ones. No doubt he really wanted to label those of us in the West concerned with preserving our land and culture as Islamophobic, Transphobic, Homophobic, Misogynistic, Bigots.

And by the way, calling people names is not an argument.

4) “…great concern for all those concerned for the safety of every human being.”

This is the most infuriating feature of the Pope’s message. Earlier in his speech, he said, “In a spirit of compassion, let us embrace all those fleeing from war and hunger, or forced by discrimination, persecution, poverty and environmental degradation to leave their homelands,” but fails to point out how dangerous it is to walk through Islamic No-Go Zones, which are popping up all over Europe. He fails to mention the Muslim Grooming Gangs who “failed to integrate” into Western society. He fails to make any Catholic distinctions throughout his entire speech.

In short, I believe it’s safe to say this Pope is a failure. Not only is he failing to guard the Deposit of Faith, as a matter of fact, he is setting up Europe for one of the greatest sackings in its history, one which Our Lady helped us to avoid at the Battle of Lepanto.

So when Pope Francis says that modern refugees (who commit crimes, suppress Christianity in their own countries, and often come to the West illegally) are following in the footsteps of Joseph and Mary, who were on their way to comply with the wishes of their government by registering for the census, I can begin to understand why some people are calling for the Pope to “Repent or Resign.”