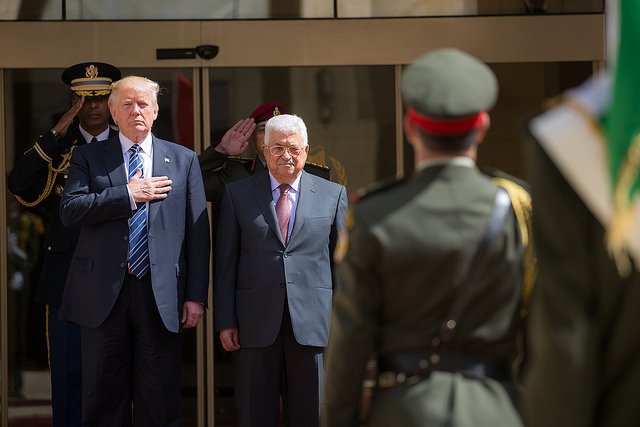 It was probably a coincidence that US Ambassador to the UN Nikki Haley hailed the Iranian anti-regime protesters and threatened to end US financial support for UNRWA – the UN Palestinian refugee agency – and the Palestinian Authority more generally in the same briefing. But they are integrally linked.

It is no coincidence that Hamas is escalating its rocket attacks on Israel as the Iranian regime confronts the most significant domestic challenge it has ever faced.

As IDF Chief of Staff Lt.-Gen. Gadi Eisenkot said this week, Iranian assistance to Hamas is steadily rising. Last August, Hamas acknowledged that Iran is its greatest military and financial backer. In 2017, Iran transferred $70 million to the terrorist group.

If Iran is Hamas’s greatest state sponsor, UNRWA is its partner. UNRWA is headquartered in Gaza. It is the UN’s single largest agency. It has more than 11,500 employees in Gaza alone. UNRWA’s annual budget is in excess of $1.2 billion. Several hundred million each year is spent in Gaza.

For the past decade, the Center for Near East Policy Research has copiously documented how UNRWA in Gaza is not an independent actor. Rather it is an integral part of Hamas’s regime in Gaza.

UNRWA underwrites the jihadist regime by paying for its school system and its healthcare system, among other things. Since 1999, UNRWA employees have repeatedly and overwhelmingly elected Hamas members to lead their unions.

In every major missile campaign Hamas has carried out against Israel since the group seized control of the Gaza Strip in 2007, UNRWA facilities have played key roles in its terrorist offensives. Missiles, rockets and mortars have been stored in and fired from UNRWA schools and clinics.

UNRWA teachers and students have served as human shields for Hamas missile launches against Israel.

UNRWA ambulances have been used to ferry weapons, including mortars, and terrorists.

UNRWA officials have served as Hamas mouthpieces in their propaganda war against Israel.

In the UNRWA school curriculum, the overwhelming message in nearly every class, and nearly every textbook, is that students should seek martyrdom in jihad against Israel. They should strive to destroy the Jewish state.

Despite repeated demands by the US Congress, and the passage of US laws requiring UNRWA to bar Hamas members from working for the agency, UNRWA administrators have insisted for more than a decade that they have no way to conduct such screening. Yet rather than cut off US funding for the agency, successive US administrations have increased funding for UNRWA every year.

Given all of this, Hamas is comfortable using Iran’s $100m. to build attack tunnels and missile launchers, because it trusts that the US and other UNRWA donor countries will continue to underwrite its regime through UNRWA.

If the US cuts off its assistance, then at least some of Iran’s money will have to be diverted to teachers’ salaries.

Hamas’s recently escalating rocket attacks on Israel may be happening because Iran wishes to deflect international attention away from its plan to brutally suppress the anti-regime protesters at home.

So the more Hamas is financially squeezed by the US and other UNRWA funders, the more likely any Hamas-Iran war plans being advanced now will be placed on the back burner.

So whether or not Haley realized it, her statement on cutting off US funding to Hamas strengthened the anti-regime protesters against the regime.

Those protesters, of course are demanding that Ayatollah Ali Khamenei and his henchmen stop raiding Iran’s treasury to finance Hezbollah, Hamas and Bashar Assad’s regime in Syria.

Haley’s comments, as well as President Donald Trump’s follow-on threat to end US funding of the PA, were more than a blow to Hamas. They marked end of the past 25 years of US-Palestinian relations.

The Clinton, Bush and Obama administrations provided the Palestinians unstinting and unconditional support, despite the fact that the Palestinians never abided by any of their expectations. They never embraced the cause of peace. Indeed, the supposedly moderate ruling Fatah faction that controls the PLO and the Palestinian Authority, and has accepted billions of dollars in US aid since 1994, doesn’t even recognize Israel’s right to exist. Fatah remains deeply involved in committing terrorism.

And the Fatah-controlled PA has sponsored, incited, financed and rewarded terrorists and terrorism since it was established under US sponsorship in 1994.

When the Palestinians last voted for their governmental representatives in 2006, they flummoxed Bush and his secretary of state Condoleezza Rice by electing Hamas to run their affairs. Rather than accept that the Palestinians were uninterested in peace and cut them off, Rice and Bush chose to pretend their vote just meant they didn’t like Fatah corruption.

A year later, after US-trained and -armed Fatah security forces cut and ran when Hamas gunmen opened fire on them in Gaza, the US didn’t cut off its support for Fatah’s security forces. The US massively expanded that support.

As for Hamas-controlled Gaza, Rice responded to Gaza’s transformation into the Palestinian equivalent of Taliban-controlled Afghanistan by immediately raising US financial support for UNRWA by $40m. and pretending that the money would not benefit Hamas.

After that, both the Bush and Obama administrations touted UNRWA as an independent counterforce to Hamas, despite the fact that their protestations were demonstrably false and indeed, entirely absurd.

In this context, Abbas and his deputies had every reason to believe they could initiate anti-American resolutions at the UN in response to Trump’s recognition of Jerusalem as Israel’s capital and face no consequences. It made sense as well for them to boycott administration officials in retaliation for Trump’s Jerusalem policy and assume that the US would continue to finance them.

The Trump administration’s threat to cut off funding to UNRWA and the PA does not point to a new US policy toward the Palestinians. It simply makes clear that unlike all of its predecessors, Trump’s support for the Palestinians is not unconditional.

As Trump, Haley and other senior officials have made clear, they are still trying to put together their policy for the Palestinians. And this is where Israel needs to come into the picture.

IT IS important to recall that the US’s unconditional support for the Palestinians across three administrations was the result not of a US decision, but an Israeli one. It was Israel under the Rabin-Peres government, not the US under then-president Bill Clinton, that decided to recognize the PA in 1993 and give Yasser Arafat and his deputies control of Gaza and the Palestinian towns and cities in Judea and Samaria. If Yitzhak Rabin and Shimon Peres hadn’t decided to abandon the then-ongoing US peace talks that excluded the PLO in favor of Norwegian talks with the PLO, the US would probably not have embraced the PLO.

Now that the Trump administration is abandoning its predecessors’ policy, the time has come for Israel to offer it an alternative. This week, the government and the governing Likud party took two steps toward doing just that.

On Sunday, the Likud central committee passed a resolution unanimously that called for Israel to apply its law to the Israeli communities in Judea and Samaria. Although the resolution was declarative, and does not obligate Prime Minister Benjamin Netanyahu, it points toward the policy that either this government or its successor will likely adopt.

In both the 2013 and 2015 elections, facing the hostile Obama administration, Netanyahu refused to run on any platform other than his personal credibility. With the Likud resolution, and with a Trump administration interested in considering alternatives to the failed policies of its predecessors, Netanyahu can be expected (and should be urged) to pledge to implement his party’s policy if reelected.

On Monday, the Knesset passed an amendment to the Basic Law: Jerusalem. The amended law protects Israel’s sovereignty over the territory now within Jerusalem’s municipal boundaries while permitting the government to take some of that territory out of the municipal boundaries. The idea is that some Arab villages now within the city limits will be given their own local councils.

Today, for political reasons, Arab residents of Jerusalem refuse to vote in municipal elections. Consequently, they have effectively disenfranchised themselves. By providing them with separate local councils while ensuring that they will remain governed by Israel’s liberal legal code, the Knesset provided a model for future governance of the Palestinian population centers in Judea and Samaria.

In response to Haley’s and Trump’s threats to cut off funding to the PA and UNRWA, Rice’s Israeli counterpart, former foreign minister Tzipi Livni, wrote on Twitter that the government should lobby Trump to maintain funding. In her words, “A responsible and serious government would sit quietly and discretely with the US president and explain the Israeli interest.”

Livni maintained that interest remains what it was when she backed Rice’s decision to expand US funding to Hamas-controlled UNRWA and the feckless US-trained Fatah security forces.

Luckily, like the Trump administration, Israel’s government today recognizes that repeating the failures of its predecessors makes no sense.

The Likud’s resolution on Judea and Samaria and the Knesset’s amendment to the Basic Law: Jerusalem represent the beginning of a new Israeli policy toward the Palestinians.

A new US policy will involve providing the Palestinians the means to govern themselves while enjoying the protections of Israeli law. It will involve ending US support for Palestinian sponsorship and finance of terrorism. It will involve securing Israel’s borders, security and national rights. And of course it will involve kicking Iran out of Gaza and out of the Levant more generally.