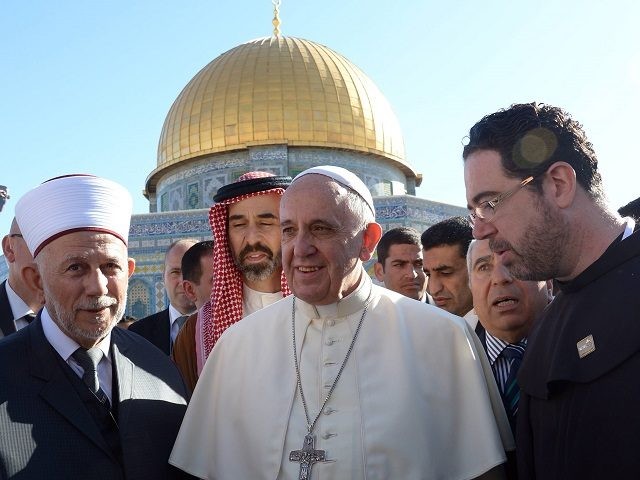 Pope Francis has promised to continue pressing for a two-state solution between Israel and Palestine, while supporting the special status of Jerusalem, independent of any state. He outlined his plan in a missive to the Grand Imam of Al-Azhar, Ahmad Al-Tayyib.

In his letter dated Jan. 18, the pope acknowledged an invitation by the imam to an international Conference at Cairo’s Al-Azhar University in support of Jerusalem, taking place in these days when the pontiff is on apostolic journey to Chile and Peru.

“The Holy See will not cease to urgently insist on the need for a resumption of dialogue between Israelis and Palestinians for a negotiated solution aimed at the peaceful coexistence of two States within the borders agreed upon between them and internationally recognized,” he said, “in full respect of the peculiar nature of Jerusalem, whose meaning goes beyond any consideration of territorial matters.”

“Only a special statute, also internationally guaranteed, can preserve its identity,” he said, “and its unique vocation as a place of peace recalled by the sacred places, as well as its universal value, allowing a future of reconciliation and hope for the whole region.”

“I assure you that I shall continue to invoke God for the cause of peace, of a true, real peace,” Francis wrote. “In particular, I raise heartfelt prayers so that the leaders of the nations, and civil and religious authorities everywhere commit themselves to averting new spirals of tension and to support every effort to make concord, justice and security prevail for the peoples of that blessed land that I cherish so much.”

Shortly before U.S. President Donald Trump’s announcement last month that he would transfer the U.S. Embassy to Israel from Tel Aviv to Jerusalem, Pope Francis appealed for respect for Jerusalem’s “status quo” while expressing his consternation over the announcement.

“My thoughts now turn to Jerusalem,” the Pope said following his weekly General Audience on Dec. 6. “I cannot remain silent about my deep concern for the situation that has been created in the last days.”

“At the same time, I would like to make a heartfelt appeal for everyone’s commitment to respect the city’s status quo, in conformity with the pertinent United Nations Resolutions,” he said.

The Pope joined Arab, Muslim and European Union leaders who similarly voiced their opposition to the move, suggesting it could create turmoil in the area.

“Jerusalem is a unique city, sacred to Jews, Christians and Muslims, who venerate the Holy Sites of their respective religions there, and it has a special vocation to peace,” the Pope said.

“I pray to the Lord that this identity may be preserved and strengthened for the benefit of the Middle East and of the entire world,” he said, “and that wisdom and prudence prevail, to avoid adding new elements of tension in an already convulsed worldwide panorama marked by so many cruel conflicts.”

In announcing the relocation of the U.S. Embassy, the United States government also recognized Jerusalem as the capital of Israel.”

Officials said that the change represented a recognition of “reality,” both the historic reality that Jerusalem has been the capital of the Jewish nation since ancient times and the modern reality that the city is the seat of Israel’s government, housing its legislature, supreme court, prime minister, and executive agencies.