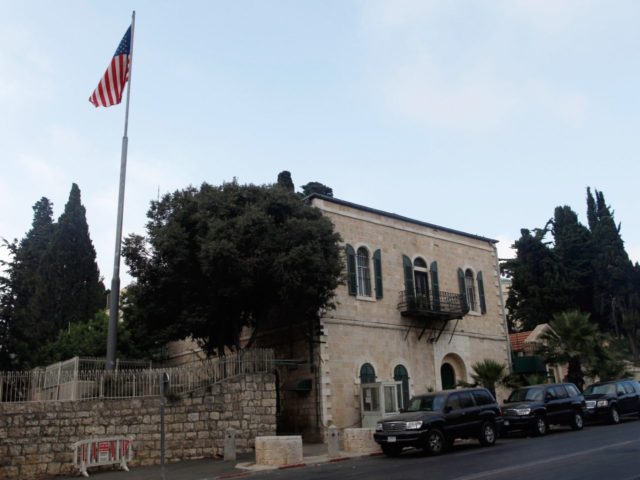 President Donald Trump is accelerating the move of the U.S. embassy in Israel from Tel Aviv to Jerusalem, with the transition now expected to occur by 2019 — several years ahead of the original schedule.

Last month, when Trump announced the move, Israeli officials suggested that the U.S. could relocate its embassy simply by designating the current American consulate in western Jerusalem as the embassy. Mayor Nir Barkat of Jerusalem suggested that U.S. officials merely replace the plaque on the consulate.

At the time, however, U.S. officials rejected that suggestion, saying that security and logistical concerns dictated that the a new facility be built, meaning that the embassy might not be moved for three to four years, at earliest.

As Breitbart News’ Michelle Moons reported at the time:

It was noted that there are approximately 1,000 personnel in Tel Aviv, and that it would take some time to find an appropriate site in Jerusalem. One official stated that despite hopes for an immediate move, it was a “practical impossibility to move the embassy tomorrow.”

“It will take some time to find a site, address security concerns, design a new facility, fund a new facility…[and] build it,” said one of the senior officials.

When later pressed on a timeframe, one official said that he expected it would take no less than three to four years, as other U.S. embassies have taken at least that long to move. One remarked that the ongoing relocation of the U.S. embassy in London took eight years.

Now, however, the Trump administration has decided to move ahead with a plan that uses the consulate facility. The Wall Street Journal reported Thursday evening: “People familiar with the plans say officials intend to reconfigure portions of an existing U.S. consular facility in West Jerusalem, an area Israel has held since 1948, so that it can be designated as the U.S. Embassy.”

The New York Times added that the new plan “will reduce the cost of the project and allow Ambassador David M. Friedman and his staff to move there as early as next year.”

The Times added that Ambassador Friedman had wanted to move the embassy in 2018, but that Secretary of State Rex Tillerson had pushed for a delay until 2019 to allow time for security upgrades.

There could be several factors at play in Trump’s decision to accelerate the move. One is undoubtedly the deteriorating relationship with the Palestinian Authority, which has taken an explicitly anti-American stance since the embassy move was announced. In response, the Trump administration has been suspending aid to Palestinians, including $45 million in food aid suspended Thursday.

Another factor may be the worry that a future administration could reverse Trump’s decision if the embassy is not relocated during his time in office. The new U.S. embassy to the United Kingdom took eight years to complete.