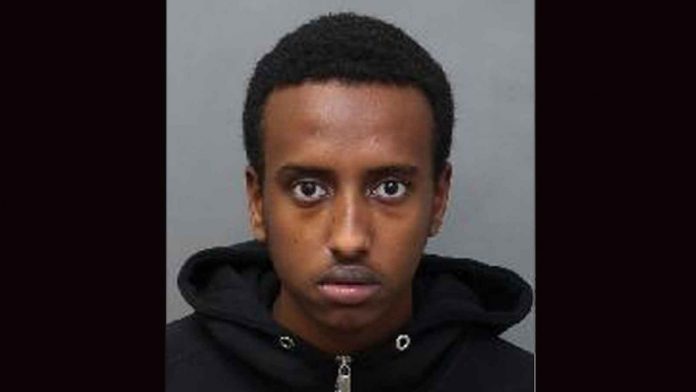 “A 20-year-old Brampton man,” the Canadian Press reported Tuesday, “is facing dozens of charges, including seven counts of attempted murder, in what police describe as a string of unprovoked, random shootings in Toronto that narrowly missed being fatal.” As it turns out, this could have been a series of jihad attacks, but you will never learn that from the Canadian Press, or from Canadian authorities.

Toronto Police Supt. Ron Taverner was just glad that the shooter hadn’t done more damage: “We’re lucky that we’re not dealing with potentially seven homicides or more.” However, he had no idea why he was dealing with seven attempted homicides: “I wish we could say we had a motive, but we don’t.” He added:  “It’s mind-boggling, quite frankly. We haven’t been able to determine any motive whatsoever that these are other than random shootings.”

Yes, it is indeed mind-boggling. The “20-year-old Brampton man” turns out to be named Adam Abdi. Abdi means servant, as in servant of Allah, and is a common name for Muslims worldwide. Adam Abdi is, therefore, likely Muslim, and could be carrying out the Islamic State’s call to murder civilians in Western countries. The Islamic State issued this call in September 2014:

So O muwahhid, do not let this battle pass you by wherever you may be. You must strike the soldiers, patrons, and troops of the tawaghit. Strike their police, security, and intelligence members, as well as their treacherous agents. Destroy their beds. Embitter their lives for them and busy them with themselves. If you can kill a disbelieving American or European — especially the spiteful and filthy French — or an Australian, or a Canadian, or any other disbeliever from the disbelievers waging war, including the citizens of the countries that entered into a coalition against the Islamic State, then rely upon Allah, and kill him in any manner or way however it may be….If you are not able to find an IED or a bullet, then single out the disbelieving American, Frenchman, or any of their allies. Smash his head with a rock, or slaughter him with a knife, or run him over with your car, or throw him down from a high place, or choke him, or poison him….

If Adam Abdi is not Muslim, but some random psychopath, then Taverner should say so, so as to allay suspicions among the people that these could be jihad attacks. But Taverner cannot do that, because to do so would be to acknowledge that Muslims do sometimes kill in the name of Islam and in accord with its teachings, and it is impossible for Taverner to acknowledge such a thing, however obvious a fact it may be, in today’s atmosphere of totalitarian radio silence about such facts in Canada.

And if Adam Abdi is indeed a Muslim, then Taverner and his team should begin investigating whether or not he was motivated by jihad imperative. But that also he cannot do, because it, too, would be tantamount to admitting that there is a jihad imperative in the first place.

So we get this: a man who is likely a Muslim shoots random people at a time when a major international Islamic jihad terror organization has called for the killing of random people, and the police tell us nothing about the man, and say they’re scratching their heads as to his motive — something we have seen police forces around the world do when confronted with jihad attacks and plots that they don’t want to admit to be what they are. And we may never know what really happened with Adam Abdi and these shootings.

The victims deserve better, but in Canada, as in many quarters all over the West, Islam’s image must be protected at all costs, and that is the first and foremost priority that all authorities must pursue. The victims’ rights and well-being can go hang, as far as the authorities are concerned.