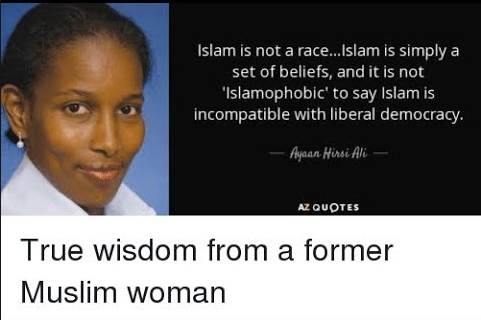 The term “Islamophobia” was invented and promoted in the early 1990s by the International Institute for Islamic Thought (IIIT), a front group of the Muslim Brotherhood. Former IIIT member Abdur-Rahman Muhammad — who was with that organization when the word was formally created, and who has since rejected IIIT’s ideology — now reveals the original intent behind the concept of Islamophobia: “This loathsome term is nothing more than a thought-terminating cliche conceived in the bowels of Muslim think tanks for the purpose of beating down critics.” In short, in its very origins, “Islamophobia” was a term designed as a weapon to advance a totalitarian cause by stigmatizing critics and silencing them.

This plan was an outgrowth of the Muslim Brotherhood’s “General Strategic Goal for North America,” by which the organization aimed to wage “a kind of grand Jihad in eliminating and destroying the Western civilization from within and ‘sabotaging’ its miserable house by their hands … so that … God’s religion [Islam] is made victorious over all other religions.” To implement this plan, the Brotherhood enlisted the help of 29 likeminded “organizations of our friends” (one of which was IIIT), whose task would be to depict themselves as civil-rights groups speaking out on behalf of a Muslim American population that was allegedly besieged by outsiders who harbored an illogical, unfounded fear of them — i.e., by a society replete with “Islamophobia.”

Although the term was coined in the early 1990s, “Islamophobia” did not become the focus of an active Brotherhood campaign until after 9/11. Since that time, Islamist lobby organizations (including the Council on American-Islamic Relations, or CAIR) and Muslim civil-rights activists have regularly accused the American people, American institutions, law-enforcement authorities, and the U.S. government of harboring a deep and potentially violent prejudice against Muslims. The accusers charge that as a result of this “Islamophobia,” Muslims are disproportionately targeted by perpetrators of hate crimes and acts of discrimination.

But FBI data on hate crimes show that the foregoing accusers are wholly incorrect. The incidence of anti-Muslim abuses nationwide has actually declined since September 2001.

Moreover, anti-Islamic hate crimes are but a fraction of overall religious hate crimes. In fact, the overwhelming majority of such crimes target Jews. In 2006, for instance, fully 66 percent of religiously motivated attacks in the U.S. were against Jews, while just 11 percent targeted Muslims, even though the Jewish and Muslim populations in the United States are similar in size. In 2006, a total of 156 anti-Islamic hate crimes were committed nationwide — a 68 percent drop from 2001.

The FBI report discredits CAIR’s alarmist narrative of “Islamophobic” lynch mobs marching on mosques across America. It shows that in reality, Americans have been remarkably, and admirably, tolerant and respectful of Muslims and their institutions since 9/11.

Each year, CAIR, which claims to be the “Muslim NAACP,” releases a report citing thousands of alleged civil-rights and physical abuses against Muslims, which largely are based on anecdotal reporting from members of its organization. Despite CAIR’s obvious bias (and proven record of dissembling), the mainstream media often report its numbers unfiltered and without question.

But a careful analysis of the numbers shows that the incidents reported by CAIR are mostly victimless crimes. For instance, in its 2006 report CAIR listed as “hate crimes” such occurrences as:

Even in the immediate aftermath of 9/11, there was virtually no vigilantism or violent backlash against Muslims in the United States. In November and December 2001, Zogby polled American Muslims and found that only 6 percent had suffered “physical abuse or assault.”

In October 2010, CAIR announced that it was forming a new “Islamophobia” department that would produce an annual report tracking “trends in rhetorical attacks on Islam and Muslims and … offer accurate and balanced information to be used in the struggle for tolerance and mutual understanding.”

A Nexis search suggests that the term “Islamophobia” was first used in the media around 1990, when a Soviet Academy of Sciences academic told an Uzbekistan-based newspaper that Soviet leaders’ “Islamophobia” might trigger an “Islamic explosion.” In 1995, Jordan’s Prince Hassan used the wordin an address at the UN General Assembly, asserting that many people were using “inflammatory rhetoric” to “ta[r] all Moslems with the brush of fanatical extremism.” In 1996 the British think tank Runnymede Trust established a Commission on British Muslims and Islamophobia, which later produced a report entitled “Islamophobia: A challenge for us all.” In the late 1990s, Iranian diplomats used the term with increasing frequency at the (now-defunct) UN Commission on Human Rights, characterizing the phenomenon as “the perception of Islam and its followers as threats to the West.” Today, references to “Islamophobia” appear regularly in UN documents.