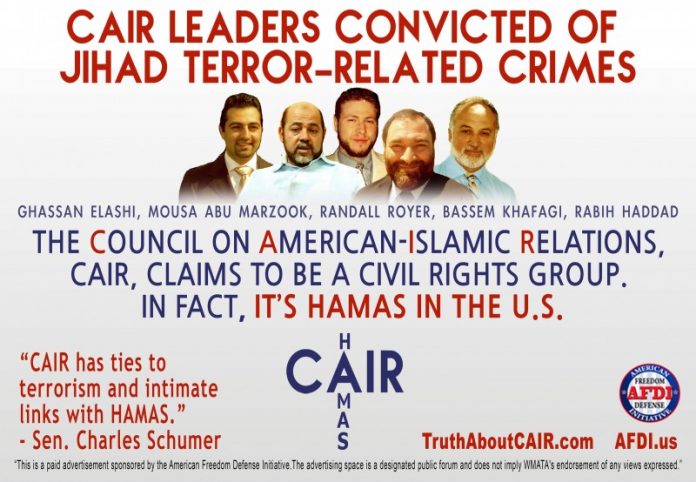 “The sheet of paper distributed by the teacher states Sharia Law, or Islamic religious law, gives Muslim men sexual rights over any woman or girl not wearing the hijab or head scarf; allows a man to marry an infant girl and consummate the marriage when she is 9; and requires Muslims to lie to non-Muslims to advance their faith.”

This material may not be appropriate for seventh-graders, and it is indeed “appalling,” but it is not inaccurate.

1. “Sharia Law, or Islamic religious law, gives Muslim men sexual rights over any woman or girl not wearing the hijab or head scarf.”

This is stating flatly what is only implied in Islamic texts, but it is not inaccurate. The Qur’an teaches that Infidel women can be lawfully taken for sexual use (cf. its allowance for a man to take “captives of the right hand,” 4:3, 4:24, 23:1-6, 33:50, 70:30). The Qur’an says: “O Prophet, tell your wives and your daughters and the women of the believers to bring down over themselves of their outer garments. That is more suitable that they will be known and not be abused. And ever is Allah Forgiving and Merciful.” (33:59) The implication there is that if women do not cover themselves adequately with their outer garments, they may be abused, and that such abuse would be justified. We have seen Muslim migrants all over Europe committing mass sexual assault and rape of non-Muslim women, making it clear that at least some Muslims do indeed believe that Sharia gives them sexual rights over women who aren’t covered.

2. “Sharia Law…allows a man to marry an infant girl and consummate the marriage when she is 9.”

Let’s see what Islamic authorities have to say about this:

“Islam has no age barrier in marriage and Muslims have no apology for those who refuse to accept this” — Ishaq Akintola, professor of Islamic Eschatology and Director of Muslim Rights Concern, Nigeria

“There is no minimum marriage age for either men or women in Islamic law. The law in many countries permits girls to marry only from the age of 18. This is arbitrary legislation, not Islamic law.” — Dr. Abd Al-Hamid Al-‘Ubeidi, Iraqi expert on Islamic law

There is no minimum age for marriage and that girls can be married “even if they are in the cradle.” — Dr. Salih bin Fawzan, prominent cleric and member of Saudi Arabia’s highest religious council

“Islam does not forbid marriage of young children.” — Pakistan’s Council of Islamic Ideology

Hadiths that Muslims consider authentic record that Muhammad’s favorite wife, Aisha, was six when Muhammad wedded her and nine when he consummated the marriage:

3. “Sharia Law…requires Muslims to lie to non-Muslims to advance their faith.”

“Requires” may be a bit strong, but it certainly allows it. Qur’an 3:28 warns believers not to take unbelievers as “friends or helpers…unless you are guarding yourselves against them.” This is a foundation of the idea that believers may legitimately deceive unbelievers when under pressure. The Qur’an commentator Ibn Kathir says that the phrase “unless you are guarding yourselves against them” means that “believers who in some areas or times fear for their safety from the disbelievers” may “show friendship to the disbelievers outwardly, but never inwardly. For instance, Al-Bukhari recorded that Abu Ad-Darda’ said, ‘We smile in the face of some people although our hearts curse them.’ Al-Bukhari said that Al-Hasan said, ‘The Tuqyah [taqiyya] is allowed until the Day of Resurrection.” While many Muslim spokesmen today maintain that taqiyya is solely a Shi’ite doctrine, shunned by Sunnis, the great Islamic scholar Ignaz Goldziher points out that while it was formulated by Shi’ites, “it is accepted as legitimate by other Muslims as well, on the authority of Qur’an 3:28.” The Sunnis of Al-Qaeda practice it today.

Also, there is Muhammad’s statement, “war is deceit” (Bukhari 4.52.268). He also allowed for lying in battle and between a husband and wife (Muslim 6303). And when he gave permission to one of his followers, Muhammad bin Maslama, to murder one of his critics, Ka’b bin al-Ashraf, he also gave Muhammad bin Maslama permission to lie to Ka’b in order to lure him close enough to be killed.

And Muhammad is the “excellent example of conduct” for Muslims (Qur’an 33:21).

As for the parents’ claim that their son has been bullied because of this material, it cannot be taken at face value in light of the numerous “anti-Muslim hate crimes” that turn out to have been faked by Muslims. They must produce evidence of some kind — would eyewitness testimony from other students be too much to request? Probably. What is most likely is that the California Department of Education will take the claims of the parents and Hamas-linked CAIR at face value, without examination, and drop this material.

The Council on American-Islamic Relations’ Los Angeles chapter filed an appeal this week on behalf of a Ventura County family whose son received instructional material in his seventh-grade social studies class that berated Muslims and which was taken, the group says, from an anti-Muslim website.

During a press conference Thursday morning, Jan. 11, at CAIR-LA’s Anaheim office, the boy’s parents said their son is afraid and reluctant to go to school since October because he is being bullied by his peers for being Muslim in reaction to the inaccurate statements contained in the history teacher’s instructional material.

CAIR-LA’s appeal to the California Department of Education challenges the Mesa Union School District’s determination that the teacher’s actions were not discriminatory. The school district is located in Somis, an unincorporated community in Ventura County.

District superintendent Jeff Turner declined comment. The district “continues to seek resolution of this matter,” he said in a released statement.

The sheet of paper distributed by the teacher states Sharia Law, or Islamic religious law, gives Muslim men sexual rights over any woman or girl not wearing the hijab or head scarf; allows a man to marry an infant girl and consummate the marriage when she is 9; and requires Muslims to lie to non-Muslims to advance their faith….