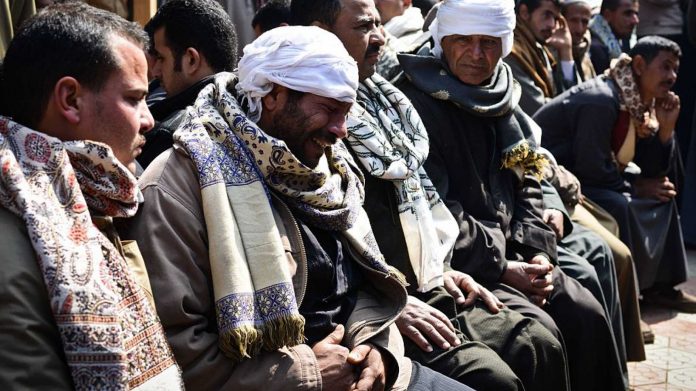 I was recently invited to attend and give a reflection at a prayer vigil for persecuted Christians, hosted by a church in Maryland. The church was hoping that 150 congregants would come. They got about three.

To be fair, there was some bad weather that afternoon. And it was on a Friday night, when most people would rather be relaxing on the couch or going out to a nice dinner with their spouse. There are a million reasons — a few of them even legitimate — why you might not show up to something like this. But it was sad, all the same, to see the bare pews, and to hear a couple of speakers deliver beautiful and impassioned pleas to an empty church. At the end they collected donations for a Christian school in Iraq, but nobody was there to give anything.

Before the vigil, I remember saying to my wife that every church in the country ought to do something like this at least once a month. Now I know why they don’t.

I reflected on this when I read a report that Christian persecution and genocide is worse now than it has ever been in history. Christians in Afghanistan, Somalia, Sudan, Pakistan, North Korea, Libya, Iraq, Yemen, Iran, Egypt, and many other countries, are regularly imprisoned, tortured, beaten, raped, and martyred. Their churches are destroyed. Their houses burned. They meet and worship in secret, risking their lives in the process. They live every moment in constant danger.

About 215 million Christians face what is called “extreme persecution” for their faith. It’s estimated that around a million have been slaughtered since 2005. There is no way to know exactly how many. What we do know is that Christianity has been dramatically reduced in parts of the world where it had existed for nearly 2,000 years.

Tradition tells us that St. Mark brought Christianity to Egypt in the early part of the first century. Today, the seed he planted has been ripped up. Two churches in the country were attacked and 44 Christians massacred on Palm Sunday last year. In the same year, 28 Christian pilgrims were martyred while en route to a monastery. The Muslim assailants gave them a chance to save themselves if they would recite an Islamic profession of faith. They refused and so they were shot in the head. This sort of thing is a regular occurrence in Egypt and in several other nations across the globe.

But what do we care?

There are other things to worry about here. Hollywood sex scandals. Twitter disputes. Whatever controversial thing Trump said this week. So on and so on. We — myself included — spend far more time, and spill far more ink, on these issues than we ever have on the coordinated genocide of our fellow believers in the Middle East, Africa, and Asia. Why?

I have come to believe that our disinterest stems not only from the general apathy that defines western society and the western church, but from moral cowardice. To face the plight of our brothers and sisters is to face ourselves. To see these Christians who would rather be shot dead in the desert than renounce their faith is to see our own faith as a shabby, pitiful, hollow imitation. To see Christians who would risk their very lives to go to church and preach the Gospel is to question why we will do neither of those things, even though we are perfectly free and able. We cannot confront these truths of ourselves, so we will not confront the truth of Christian persecution.

Christians in the East forfeit their lives rather than forfeit their souls, and we forfeit our souls even though we could quite easily retain both. The Church overseas has been under violent assault, yet the enemies of Christ have not won. They have diminished the Church in numbers by killing its members, but it is strong and resilient where it still stands. Our situation is exactly the reverse.

We have submitted to the forces of darkness. We have bent our knees in homage to Satan, and the enemies of the faith haven’t even fired a shot to induce our surrender. Satan does not beat us with a stick; he dangles a carrot. He lulls us to sleep. He distracts us. He tempts us. Kill us? Why would he do that? We are no threat to him. A Christian in Afghanistan is a threat. He must be destroyed. It’s the only way. But a lazy, soft, equivocating Christian in the West? There is no need to persecute him. He is not worthy of it. Just give him a television and the internet and let him damn himself.

Satan’s legions in America — to include his agents within the church, of which there are many — have figured out the secret. Don’t put a gun to their heads and tell them to stop being Christian. Instead, just give them something else to do. Whatever you do, never make them afraid, because if you do that you may accidentally awaken their courage. And then your plan is in trouble.

Indeed, if your persecution produces a bunch of passionate, courageous Christians, you better go and execute every last one of them. Leave even one alive, let even one slip through the cracks, and you’re doomed. A Christian like that — one who cannot be shamed into silence, cannot be intimidated, cannot be made to conform, cannot be controlled by Earthly forces — is powerful beyond all imagining. All you can do with him is kill him. He’s too dangerous. Your tricks won’t work on him. He has the grace of God and you have nothing better to offer him.

From the Devil’s perspective, this is not ideal. Murdering such a Christian means sending him straight to Heaven, which is why the mass slaughter of Christians is a bittersweet sight in Hell. On one hand, the demons enjoy such immense suffering. On the other, they are losing souls forever into the arms of the Almighty. Satan surely prefers the situation here in the West. We believe we are blessed to be free from the trials inflicted upon our brothers and sisters, but he knows better. We kick back and relax in our false sense of security while he licks his lips and prepares to feast upon us.

He knows that we have become numb in our comforts. Our faith is stagnant and stale. We don’t cling desperately to God. We cling to other things: our jobs, our relationships, our ambitions, our friends, our hobbies, our phones, our pets. We don’t even think of Him most of the time. We make no attempt to conform our lives to His commandments or to walk the narrow path that Christ forged for us. We are too busy for all that, we say, and it’s inconvenient. Christ says, “Pick up your cross and follow,” but we take this as an optional suggestion. We leave our crosses on the side of the road and head back inside where it’s warm and there’s a new Netflix show to binge. We tell ourselves that we’ll be fine in the end because we are decent people, and we are leading normal lives, and, sure, we believe in Jesus or whatever.

He does not want us to be jolted out of this stupor, and he has no doubt instructed his legions accordingly. The persecutors of the church in America have quite an easy job. For them, the strategy is clear: Put down the gun. Drop the machete. Don’t scare these people. Don’t make martyrs of them. Don’t give them any hint that there is a war going on and the fate of their souls lies in the balance. Let them be arrogant and self-assured. Let them push out any thought of their own mortality. Let them dismiss everything I’m saying right now as “pessimistic” and “negative.” Let them enjoy themselves. Let them have their spiritual indifference and let them dress it up as “positivity” and “hopefulness.” Let them have it all. Fluff their pillow for them, even. Turn on the TV and hand them the remote. Feed them. Pamper them. Pleasure them. Give them everything their hearts desire. Don’t appeal to their fear; appeal to their lust, their laziness, their gluttony, their vanity, their pride, their boredom.