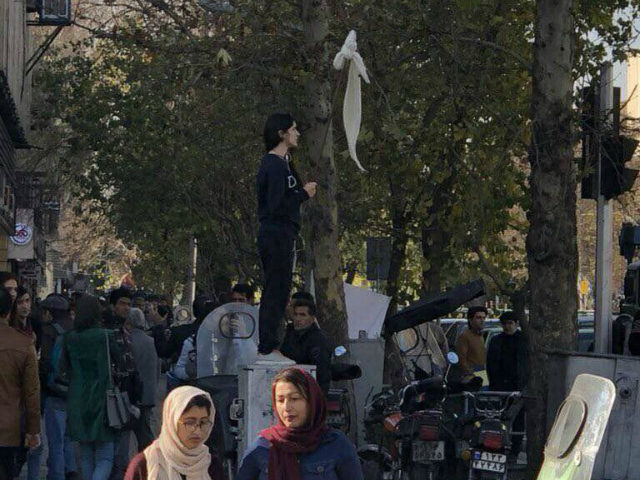 The hashtag #NoHijabDay has taken social media by storm, accompanied by videos and pictures of women all over the world burning their hijabs in solidarity with Iranian women who are forced to wear the compulsory head covering.

Anoud Al Ali, 20, a self-described bisexual, atheist, ex-Muslim, feminist activist from the United Arab Emirates, took video of herself setting her hijab on fire. “For me, being oppressed, and for all other women who are oppressed, I’m going to burn this hijab; the symbol of oppression,” she said. Ali then placed her hijab into a cardboard box, doused it with gasoline, lit a match, and set it on fire.

She said she burned the hijab on her birthday and that it felt “liberating.”

As promised, I did it on my birthday, it feels so liberating to burn the #hijab. And I am doing that in solidarity to #Iranian women who are protesting against the madatory hijab and for all the forced girls. #nohijabday we are not candies or diamonds to be covered. We’re humans. pic.twitter.com/S95oMAsxYG

Another woman writer Yasmine Mohammed, described by Ex-Muslim TV and the Daily Mail as a “Canadian Egyptian ex-Muslim,” did the same and posted a video to Twitter, saying, “Happy No Hijab Day. Burn, baby, burn.”

Others took the opportunity to defend the hijab:

The movement arrives in the wake of ongoing protests throughout Iran against the Islamic government. The Daily Mail reported, “The office of President Hassan Rouhani revealed that a 2014 survey found that 49 percent of Iranians believed women should be allowed to choose what to wear, DW.com reports.”

The publication added, “A woman who spoke anonymously to Deutsche Welle said she believed the numbers would be even higher if the survey was carried out today.”

The hijab was made compulsory, or mandatory, during the Islamic revolution of 1979.

On Monday, Iran’s judiciary reportedly claimed that all women who took their headscarves off in public and protested “had been on drugs.”

The Daily Mail also reported that on Friday, police in Tehran arrested 29 women for appearing in public without a headscarf.

One day before the December 28 protests began, Iran said police will soon stop arresting women for violating Islamic dress codes and instead send them to police-run classes on “Islamic values.” However, Friday’s spate of arrests appears to contradict the Iranian regime’s statement.