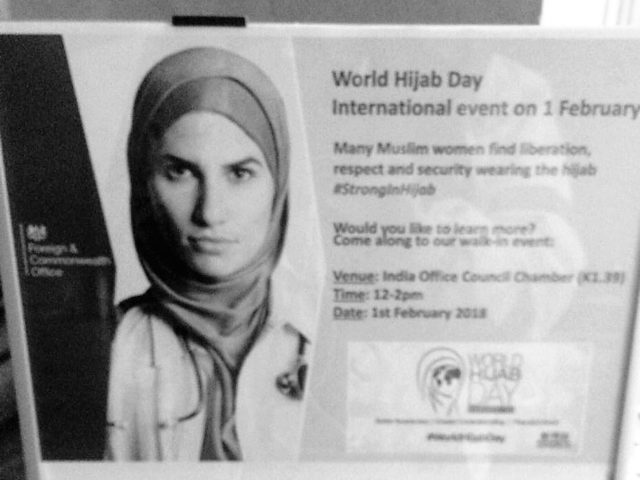 The Foreign and Commonwealth Office of the United Kingdom (FCO) has promoted the wearing of the Islamic veil amongst its London staff, using the February 1st occasion of “World Hijab Day” to promote the head covering and even issue “free scarves” to those who chose to try it.

The department of the British government also promoted the idea of “liberation” when wearing the veil that Muslim women across the world have shunned as an antiquated, oppressive, religious tool.

The FCO — Britain’s equivalent of the U.S. Department of State — issued invites to its staff ahead of the event, stating:

Would you like to try on a Hijab or learn why Muslim women wear the headscarf? Come along to our walk-in event. Free scarfs for all those that choose to wear it for the day or part of the day. Muslim women, along with followers of many other religions, choose to wear the Hijab. Many find liberation, respect and security through wearing it. #StrongInHijab. Join us for #WorldHijabDay. When queried, the FCO’s press office refused to provide immediate comment to Breitbart London over 15 times, stating they were too busy, or that the matter was being dealt with by another member of their communications team.

Breitbart London reporters attempted to get a simple “yes or no” answer as to whether the event had taken place, following the publication of the event invite on journalist Anne-Elizabeth Moutet’s Facebook page last week, to little avail. Five days after the first enquiry was made, the Foreign Office issued the following, brief statement, but only after the incident was further publicised by critics on Facebook, and via Twitter.

An FCO spokesman said: “This was an internal event for staff in London who wished to gain a better understanding of the different cultural and social issues they may face when working overseas.”

The statement makes no attempt to explain why staff needed this training in Central London rather than on site in the requisite nations around the world, and did not comment on the fact that the appeal appears to proselytise on behalf of the Islamic headscarf, rather than simply offering “a better understanding” of the oppressive clothing.

Recent events in Iran have shown a return to women casting off the hijab in the Muslim world, as 100,000 did in 1979.

“We are fighting against the most visible symbol of oppression,” anti-hijab activist Masih Alinejad told Reuters on World Hijab Day, adding: “These women are saying, ‘It is enough – it is the 21st century and we want to be our true selves.’”

Britain’s Foreign Office — which manages embassies and consular services around the world — appears to feel differently, promoting the idea of “liberation” in their messages aimed at staff.

Breitbart London has enquired as to whether such pro-hijab events have taken place at further expense to the British tax payer in recent years or in embassies or consulates around the world in recent years. The FCO has not yet responded to the request.