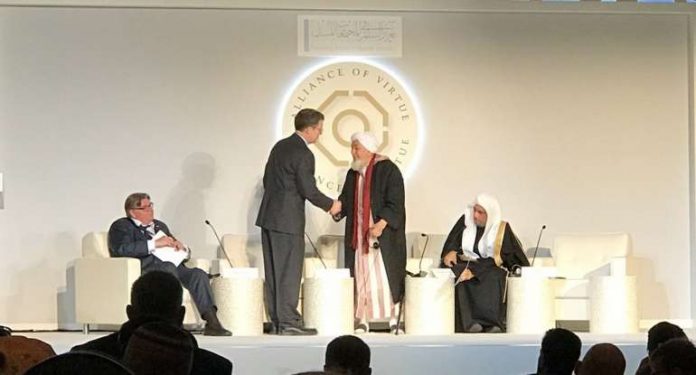 Last Thursday, Sam Brownback was sworn in as the State Department’s new ambassador for religious liberty.

Today — in his first official speech as ambassador — Brownback openly embraced a hardline Islamic cleric who authorized a fatwa in 2004 justifying the killing of Americans in Iraq, and another fatwa in 2012 calling for the destruction of the state of Israel.

Sheikh Abdullah Bin Bayyah’s past is no mystery to the State Department. For example, the Obama administration’s State Department had to repeatedly apologize in May 2014 for promoting Bin Bayyah as a moderate. However, the Obama administration then implemented a full-court press with the U.S. media and the D.C. foreign policy “Smart Set” to rehabilitate the image of the Mauritanian cleric.

The presence of multiple senior Trump State Department officials at an “interfaith” event in Washington, D.C. in support of Bin Bayyah’s efforts appears to confirm there will be no change. The Trump administration is continuing the engagement with Bin Bayyah they inherited from Obama — despite the fact that Bin Bayyah’s views on Israel are directly contrary to those of President Trump.

There is also an inherent contradiction in the Trump State Department embracing the interfaith efforts of an Islamic cleric who openly states on his website that Christians are going to hell. Bin Bayyah has also said that interfaith outreach to Jews in Arab lands should only be done with extreme caution — and only with Jews who oppose Israel.

The Obama administration’s attempts to rehabilitate Bin Bayyah were not without controversy. Most embarrassing for the Obama White House was Bin Bayyah’s approval of a 2004 fatwa authorizing the killing of Americans in Iraq and endorsing the Iraqi “resistance.” This information was raised in June 2013 after it was reported Bin Bayyah had been escorted into the White House to meet with senior members of Obama’s National Security Council.

The 2004 fatwa was issued by the International Union of Muslim Scholars (IUMS) while Bin Bayyah was serving as vice president. It called for “resisting occupation forces,” stating this was a “duty” for all able-bodied Muslims inside and outside Iraq. The official Iraqi resistance site posted the IUMS fatwa.

The Obama White House defended meeting with the cleric, but made no comment about Bin Bayyah’s past extremist statements or Islamic rulings.

Bin Bayyah’s extremist past was raised again in May 2014, when the State Department tweeted a link to one of Bin Bayyah’s statements. State quickly deleted the tweet and repeatedly apologized for promoting his work.

However, President Obama himself praised Bin Bayyah’s efforts in his 2014 UN speech. When Megyn Kelly asked State Department spox Marie Harf about it, Harf — clearly flummoxed — blurted that she was “happy with the decision.”

The 2004 fatwa is not the only controversial IUMS fatwa involving Bin Bayyah.

As noted by Steve Emerson and John Rossomando of the Investigative Project on Terrorism, in 2009 IUMS prohibited any political, economic and cultural interaction between Muslims and Israel as “a form of loyalty to the enemy, which is religiously prohibited.”

Then, a December 2012 IUMS fatwa called for the destruction of the state of Israel. Pictures clearly show Bin Bayyah front and center at the event.

How those fatwas from Bin Bayyah’s organization square with the Trump administration’s policies regarding Israel, and Jerusalem in particular, would be interesting to hear.

Bin Bayyah resigned his leadership role with IUMS in 2013, issuing a cryptic statement: “[T]he path for reform and reconciliation requires a speech that does not fit with my role in the Union.”

However, it appears he has never publicly recanted his role in the IUMS fatwas or apologized for his rulings.

In fact, those extremist fatwas align with his own published statements:

Despite his endorsement of killing Americans in Iraq and destroying Israel, and despite his defense of Palestinian terror groups, in recent years Bin Bayyah has become a darling of D.C. think-tanks. The Council on Foreign Relations and the U.S. Institute of Peace have been positive about him, as has been the establishment media: Bin Bayyah was the subject of glowing profiles by NPR and CNN.

According to a press release on his site, Bin Bayyah’s event culminates with an “interfaith” meeting tomorrow to sign a so-called “Washington Declaration” in support of religious minorities in the Muslim world.

This declaration most likely mirrors the “Marrakesh Declaration” pushed by Bin Bayyah in 2016. That declaration has been criticized as weak, and produced no changes whatsoever in the policies of Muslim countries towards non-Muslim religious minorities. If anything, the condition of religious minorities in the Muslim world continues to rapidly deteriorate.

Bin Bayyah’s event also appears timed to coincide with Friday’s National Prayer Breakfast featuring President Trump. It’s still unknown if Bin Bayyah will be present at that event, and if he will perhaps even speak alongside Trump.

Given that the Trump State Department is ostensibly dedicated to “draining the swamp” of its predecessor, it seems remarkable that it would so openly wade into Bin Bayyah’s swamp of Islamic extremism. Perhaps there’s more draining to be done.