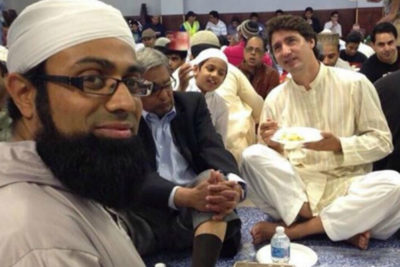 Trudeau has made a number of outlandish comments this week (“we need to rethink concepts as basic as space and time”). Canadians should be afraid, very afraid.

Just for knowing, Sharia is incompatible with democracy. One is governance based on freedom, the other slavery.

“The Canadian government wanted the Muslims to be able to regulate their own issues….to solve their problems amongst themselves [according] to Sharia Law, so it is not a burden on the court system which is already so bogged down.

ACD, however, has challenged this assumption with various facts on Islam and Islamists:

For example, the Quran states that “Men are caretakers of women… As for women of whom you fear rebellion, convince them, and leave them apart in beds, and beat them (lightly without causing injury)…” (Quran 4:34)

In his book, Human Rights in Islam and Common Misconceptions, Abdul-Rahman al-Sheha writes that “the non-Muslim residents of an Islamic state are required to pay a minimal tax called ‘Jizyah.’”

He also notes that “Allah set the penalty of cutting the hand as a penalty for theft,” and says that “if the robber kills and seizes the money, the punishment may be killing and crucifixion. If he takes money and threatens but does not kill or assault, the punishment may be amputation of his hand and leg. If he kills the victim but does not take his money, he may be executed as in murder.”

In a previous article, the ACD exposed a video on Muslim religious leaders’ belief that LGBT individuals should be executed.

In that article, ACD’s Dr. Rachel Ehrenfeld noted that “the Islamists make no secret of their views. They promote them in mosques, public lectures, articles and books often distributed free in bookstores and on city street corners.”

Countering those opposed to Sharia Law recognition, the Canadian government’s Standing Committee on Canadian Heritage completed a draft of its Motion M-103 report, which recognizes “the need to…condemn Islamophobia” and “take action” against “religious discrimination including Islamophobia.”

According to the Ontario Human Rights Commission, Islamophobia includes “acts of intolerance and racial profiling” towards Muslims as well as “viewing Muslims as a greater security threat on an institutional, systemic and societal level.”