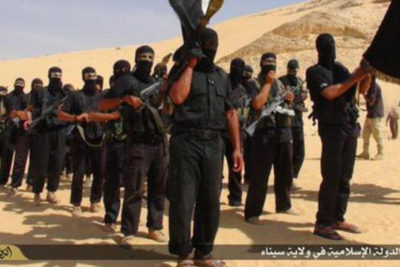 We’re constantly admonished that ISIS has nothing to do with Islam. So why are these returned jihadis living among Muslims? Why aren’t the Muslims among whom they’re living, who presumably think they’ve “hijacked” their peaceful religion, turning them in to authorities?

This is the Britain of David Cameron and Theresa May. They banned me from entering the country, but these returning jihadis are welcome. It’s national suicide.

Senior MI5 spies fear hardened fighters have returned to the UK intent on recruiting more fanatics to carry out attacks on our shores.

Intelligence chiefs believe hundreds of Brits have returned to the UK and are now living in areas with the highest concentrations of Muslims.

The source told the Daily Star Sunday that up to 300 people who have returned from Syria after fighting for Isis are believed to be living in the London borough of Tower Hamlets, using innocent Muslims as cover.

He added that hundreds more are living in Birmingham, Leicester and Luton.

The source added: “The best place to hide a tree is in a forest – and this is what those who have fought for Isis are doing. They have basically relocated their HQ from Syria to the UK. The fear is they will begin recruiting and will wage terror on British soil.

“Those returning include both men and women, mainly under the age of 25, who are skilled in guerrilla warfare and bomb-making. The threat is very real.”

Tower Hamlets has more than 40 mosques and Muslims outnumber Christians in the London borough.

Islamic State-style flags have flown in parts of the borough which was also home to three British schoolgirls who left the UK to join Isis in February 2015.

The threat from Islamist terrorism in the UK has never been so great and the police and MI5 are foiling attacks almost monthly.

Intelligence chiefs believe it is just a matter of time before Britain faces another major atrocity….