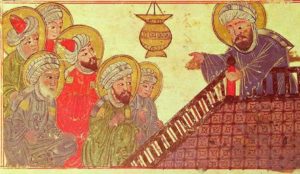 In the year 622, a seminal event occurred in the history of Islam. Two years earlier, in 620, Muhammad had met with and converted six Arabs from the town of Medina. Then in 621 Muhammad had met with additional converts from Medina and sent a Meccan Muslim back to Medina to teach others about Islam. The religion of Islam started to grow in Medina, and around June of 622 Muhammad met with an even larger group of Muslims from Medina. This group swore to protect Muhammad, and within a month or two, Muslims started emigrating from Mecca to Medina. Muhammad followed them in September of that year. 622 was the year of the Hijrah.

The Hijrah was the turning point for Islam. Muhammad had spent twelve years preaching Islam in Mecca and to the Arab tribes arriving for pilgrimages and fairs. In return, he had been largely ridiculed and rejected. After twelve years there were only about 200 Muslim converts in Mecca, including men, women and children. However, only a little over 7 years after the Hijrah, Muhammad was marching on Mecca at the head of 10,000 Muslim warriors. How did this turning point come about?

Muhammad received his first “revelation” from Allah in 610. Shortly thereafter, his wife Khadija converted to Islam, and she was soon followed by Muhammad’s young cousin Ali.

Even in these beginning days Muhammad was talking about treasures to be acquired through Muslim military conquests. Here is a report about this from an Arab merchant who briefly stayed with Muhammad’s uncle, al-‘Abbas:

I was a merchant, and I came during the pilgrimage and stayed with al-‘Abbas. While we were with him, a man came out to pray and stood facing the Ka’bah. Then a woman came out and stood praying with him, followed by a youth who stood praying with him. I said, “’Abbas, what is this religion? I do not know what this religion is.” He answered, “This is Muhammad b. ‘Abdallah, who claims that God has sent him as His Messenger with this [religion], and that the treasures of Chusroes and Caesar will be given to him by conquest. [1]

But even with this promise of treasures, Muhammad found it difficult to get converts, even among his own Quraysh tribe, and he was publicly ridiculed in Mecca.

Beginning around 614 Muhammad made it a regular practice to approach the members of Arab tribes coming to Mecca during the pilgrimage season, or for fairs, and to preach to them about Islam. Here is how Muhammad would present Islam to them:

…he approached each tribe in its halting place saying: O people! say [sic] there is no god but Allah; you will prosper and become masters of Arabia, and the Persians will surrender before you in humiliation, and if you believe you will become kings in paradise.[2]

The Muslim scholar and theologian at-Tamimi reported a slightly different version of what Muhammad would say to the Arab tribes:

O people! Say: “La Ilaha Illallah” (none has the right to be worshipped except Allah) and you will be successful and you will rule over the Arabs thereby and the non-Arabs will submit to you; and if you die you will be kings in Paradise.[3]

But even though Muhammad repeatedly proclaimed that converting to Islam guaranteed power over non-Muslims and kingship in paradise, his appeal to the Arab tribes had no success. Here is how he was received by one of those tribes, the Banu ‘Amir b. Sa’sa’ah:

One of them called Bayharah b. Firas said: “By God if I could take this young man from Quraysh I could conquer all the Arabs with him.” Then he said, “Do you think that if we follow you and God gives you victory over your opponents we shall have the command after you?” He [Muhammad] replied, “Command belongs to God, who places it where He wills.” Bayharah said, “Are we to expose our throats to the Arabs in your defense, and when you are victorious the command will go to someone else? We do not need your religion.” [4]

For Bayharah, the prospect of conquering “all the Arabs” with Muhammad was initially very appealing; but Muhammad’s inability to guarantee that Bayharah and his tribe would retain power was a deal-breaker.

So during the first ten years of Islam, Muhammad proclaimed that by joining with him in Islam one would have power over the Arabs, and the non-Arabs would submit to them. In Mecca he faced ridicule and little success; among the Arab tribes coming to Mecca he was rejected.

However, that changed in 620 when Muhammad met in the town of Mina with a group of six Arab men on pilgrimage from Medina; these men were from the Khazraj tribe. Muhammad sat down with them, explained Islam, recited some Koran verses, and, based on his pattern, probably talked about how they would be ruling the other Arabs after their conversion to Islam. These six men from Medina accepted Islam. These men, and subsequent converts to Islam in Medina, were known as the Ansar (Helpers).

Muhammad had spent ten years in Mecca talking about Islam, the Koran, and Muslims ruling the non-Muslims, with little success. Why did he have success with these six men?

For these six Khazraj men there was a factor that made them particularly receptive to Muhammad’s teachings: threats from the Jews in Medina. The noted Muslim historian al-Tabari (839-923) explained it this way:

One of the things which God had done for them in order to prepare them for Islam was that the Jews lived with them in their land. The Jews were people of scripture and knowledge, while the Khazraj were polytheists and idolaters. They had gained the mastery over the Jews in their land, and whenever any dispute arose among them the Jews would say to them, “A prophet will be sent soon. His time is at hand. We shall follow him, and with him as our leader we shall kill you as ‘Ad and Iram were killed.” When the Messenger of God spoke to this group of people [the Khazraj] and called them to God, they said to one another, “Take note! This, by God, is the prophet with whom the Jews are menacing you. Do not let them be before you in accepting him.”[5]

So these six Ansar had not accepted Islam because of Muhammad’s religious discourses and recitation of Koran verses; they had rather focused on the promise of Muslim supremacy over non-Muslims and accepted Islam because they believed that Muhammad was the prophet with which the Jews had been threatening them. These six men of the Khajraz wanted to be the first to join with that prophet.

In 621 twelve of the Ansar came to Mecca on pilgrimage and met with Muhammad in a valley called al-‘Aqabah, which was located near Mina. They took an oath of allegiance to Muhammad and pledged to accept and practice Islam. This was known as the “First Pledge of al-‘Aqabah.” Since there was no consideration of fighting or providing protection to Muhammad, this first pledge was also known as the “Pledge of Women.”

The Ansar would later say:

We are those who have given the Bai’a (pledge) to Muhammad for Jihad (i.e. holy fighting) as long as we live.[7]

This oath of allegiance also meant that the Ansar would have to sever their ties with the Jews of Medina. One of the Ansar said to Muhammad:

O Messenger of God, there are ties between us and other people which we shall have to sever (meaning the Jews). If we do this and God gives you victory, will you perhaps return to your own people and leave us?” The Messenger of God smiled and then said, “Rather, blood is blood, and blood shed without retaliation is blood shed without retaliation. You are of me and I am of you. I shall fight whomever you fight and make peace with whomever you make peace with.”[8]

Muhammad appeared to have learned from his earlier unsuccessful interchange with Bayharah b. Firas.

The meeting ended and Muhammad told the Ansar to return to their camp. But before they left, al-‘Abbas b. ‘Ubadah said to Muhammad:

By Him who sent you with the truth, if you wish we shall fall upon the people of Mina with our swords tomorrow.[9]

Al-‘Abbas had apparently taken to heart Muhammad’s claims about Muslims ruling over non-Muslims. But al-‘Abbas probably suggested attacking the non-Muslims of Mina the next day, instead of immediately, because he was the only one who was carrying a sword that night.[10]Nevertheless, instead of admonishing ‘Abbas against killing the people of Mina, Muhammad simply said that they had not been commanded to do this.

Shortly after the “Second Pledge of al-‘Aqabah” Muhammad said that Allah had given the Meccan Muslims permission to emigrate to Medina. The small group of Muslims left Mecca and settled with the Ansar in Medina. Muhammad followed soon afterwards.[11] In less than eight years, Muhammad and his Muslim army would return in triumph to Mecca.

The promise of Muslim superiority over non-Muslims had been preached by Muhammad since the early days of Islam. But this message had been generally rejected by the Meccans and visiting Arab tribes. It was the hostility in Medina between the Jews and the Khazraj tribe, and the associated threat made by those Jews that made Muhammad’s message appealing to the six men of the Khazraj. Had these six joined the others in rejecting Muhammad’s message there would have been no Hijrah, and the religion of Islam could have ended in Mecca with the death of Muhammad.

Dr. Stephen M. Kirby is the author of five books about Islam. His latest book is The Lure of Fantasy Islam: Exposing the Myths and Myth Makers.

[11]          Before Muhammad emigrated, he was continuing to claim that Muslims would rule over non-Muslims. Here is an incident that occurred shortly before he left Mecca, when a group of non-Muslim Meccans were gathered outside his front door: