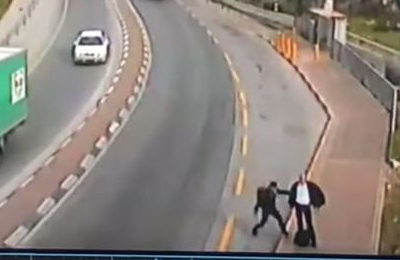 There are lots of differences between Shi’ite, Sunni, and Palestinian nationalist terrorist organizations. But they have one thing in common: a passionate hatred for Israelis and Jews.

Shortly after an Arab-Israeli stabbed and killed an Israeli civilian at a bus stop Monday, the Muslim Brotherhood, Hizballah, and Palestinian factions all praised the terrorist attack as a “heroic operation.”

On Monday, an Israeli-Arab terrorist stabbed and killed a father of four, Rabbi Itamar Ben-Gal, outside the Ariel settlement in the West Bank. Ben-Gal was stabbed several times in the chest before dying of his injuries at a hospital in Petah Tikvah. Israel authorities identified the terrorist as 19-year-old Abed al-Karim Adel Asi. With help from an accomplice in a nearby car, the terrorist fled the area. A manhunt remains underway.

Shortly after the rabbi was killed, the Muslim Brotherhood openly incited violence by glorifying the terrorist attack in a tweet.

“The killing of a Zionist settler as the result of a heroic stabbing operation in the West Bank,” wrote the Kafr Sheik Brotherhood – an official Twitter account of the Egyptian Muslim Brotherhood – according to an Investigative Project on Terrorism (IPT) translation.

The Palestinian Information Center also tweeted a graphic from the scene of the murder with the caption: “Heroic Stabbing Operation. At the entrance of the Ariel Settlement. The operation resulted in the killing of a settler.” It published photos this morning of grieving Israelis at Ben-Gal’s funeral.

Various Palestinian factions also “blessed the stabbing operation … which led to the killing of a settler,” calling the murder a “natural reaction to the crimes of Israeli occupation,” reports Arab Sola news, a joint Palestinian-Egyptian website.

The article states that Palestinian factions, including Hamas and the Palestinian Islamic Jihad, called “for the carrying out of more operations as the only means to deter the Occupation and its settlers.”

But Muslim Brotherhood and Palestinian factions weren’t the only groups celebrating after the attack. “A Zionist soldier was killed on Monday evening in a heroic stabbing operation near the Ariel Settlement on the territory of Palestinian citizens,” Hizballah-run Al-Manar news reported in an article translated by IPT.

It called the rabbi a “Zionist soldier” instead of a “settler.” Referring to the victim, incorrectly, as a soldier is meant to legitimize the attack.

Palestinian groups and radical terrorist organizations often call any Israeli a “settler” regardless of whether they live in the West Bank or pre-1967 Israel. The term “occupation” also references the entirety of Israel since its founding in 1948. As a result, radical groups always justify attacks against Israeli civilians irrespective of their location.

These near instantaneous reactions to such a heinous murder prove that, despite their ideological and ethnic differences, Israel’s Islamist enemies will glorify those that kill Jews and encourage future generations to pursue similar “heroic operations.”