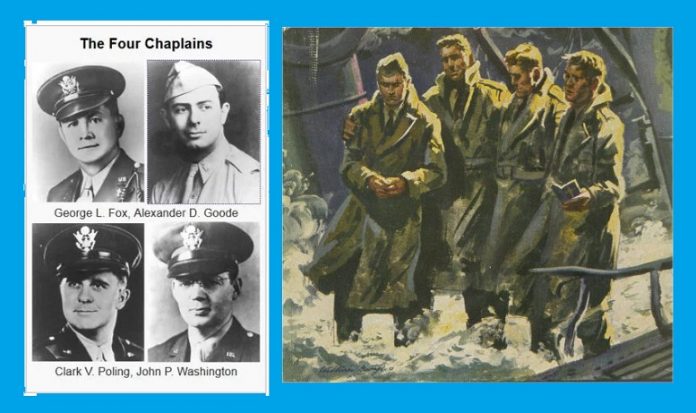 This week marks the 75th anniversary of an event memorializing selfless acts by four men of the cloth of different faiths. Despite doctrinal differences of their religions, all shared a common bond – ironically, one distinguishing their faiths from a fifth.

The four were U.S. Army chaplains Lt. George Fox (Methodist), Lt. Alexander Goode (Jewish rabbi), Lt. John Washington (Roman Catholic priest) and Lt. Clark Poling (Dutch Reformed minister). Embarked upon a converted luxury liner, the U.S. Army Transport Dorchester, on the evening of Feb. 3, 1943, with 902 other servicemen, the ship was transiting the Atlantic in convoy from Newfoundland to Greenland. Hit by a torpedo under the waterline from a German submarine, Dorchester began sinking quickly. Pandemonium erupted as men frantically looked for life jackets and lifeboats.

Managing to find their way in the darkness to the open deck, the four chaplains opened the life jacket locker and distributed them. Noting a shortage, the four took off their own jackets and gave them out as well. Seeking to bring some organization to the chaos around them, they then comforted hopeful survivors, tended to the wounded and guided those disoriented toward safety.

Petty Officer John Mahoney, a survivor, shared that as the bitter cold air lashed across the deck, he started to return to his room for gloves. Rabbi Goode stopped him to give him his own gloves, claiming he had two pair. Only later did Mahoney realize Goode never intended to leave the ship.

The four chaplains were last observed, “arms linked and braced against the slanting deck. Their voices … heard offering prayers and singing hymns.”

Only a quarter of those onboard survived.

Obviously, by his actions that night, Poling’s prayers were answered. And, although all four chaplains conducted themselves with “conspicuous gallantry and intrepidity at the risk of life above and beyond the call of duty” – the standard set by the Medal of Honor – its award was denied for not involving “heroism under fire.”

A good lawyer probably could have made the case a sinking ship erupting into flames ignited by an enemy torpedo meets that standard. However, Congress was so moved by the men’s bravery, and despite taking almost two decades to do, it authorized “The Four Chaplains’ Medal” to be awarded by the president. On Jan. 18, 1961, President John F. Kennedy did so, presenting medals to family members. The medal is never to be issued again.

In all the chaos before the Dorchester slipped under the waves, the four chaplains were a source of inspiration for all. No effort was ever made by the chaplains to discuss what their individual faiths motivated them, without hesitation, immediately to do. They shared a common bond: to help save life where they could and help ease the end where they could not, encouraging soldiers to look to their faith as they prepared to pass from one life to the next.

The personal sacrifices these four made are something to reflect upon at a time we witness acts of violence associated with a faith – Islam – which for over 1,400 years has left a blood-trail, claiming millions of lives. While no religion is without violence, a major distinction exists between that referenced in other religions’ teachings and Islam’s. For the former, the violence is historical in nature – a thing of the past; for Islam, however, it is prescriptive. In other words, Muslims are to use violence, in perpetuity, to establish Islam as a global religion to which all others are subservient.

Thus, Islam’s two primary teaching sources – the Quran and hadiths – promote a sense of superiority for followers. Accordingly, Muslim majority countries reject equality for all human life, only recognizing such status for Muslims. Promoted too by Islam is a mandate to seek out and kill Jews, cited recently by several imams delivering sermons in mosques in the U.S.

Meanwhile, imams in Muslim countries encourage their flocks to perform suicide bombings against non-Muslims to please Allah. Unlike the four chaplains who talked the talk of loving one’s fellow man and walked the walk sacrificing their own lives 75 years ago, for suicide bombings, imams talk the talk but are notoriously missing when it comes to walking the walk.

Distributing the last life jackets that February night and, in a desperate effort to save four more lives, giving away their own, the chaplains did not ask for a man of their own faith to step forward to receive their personal vest. The recipient’s faith did not matter, recognizing all human life equally. Their vests were simply given to the next four men in line. A survivor described their act as the “finest thing I have ever seen or hope to see this side of heaven.”

Had an imam been onboard Dorchester that evening, it is doubtful he would have similarly offered to surrender his vest to save another’s life. But, had he, he surely would have searched throughout the ship to find the only person worthy enough to receive it – a fellow Muslim.

During America’s history, nine chaplains have been awarded the Medal of Honor. One gathers that their faith cloaked them with an armor of courage, empowering them to face tremendous battlefield challenges to minister to the dead and dying. Reading their citations, one can almost hear the words, “Yea though I walk through the valley of the shadow of death, I will fear no evil; for thou art with me; thy rod and thy staff they comfort me.”

The personal acts of those preaching religion are most telling about practicing it. Hopefully, reflecting upon which of God’s Kingdoms we wish to spend eternity, the selflessness of the four chaplains and the selfishness of Islam’s imams will be a guiding light.

A version of this piece also appeared on http://www.wnd.com/