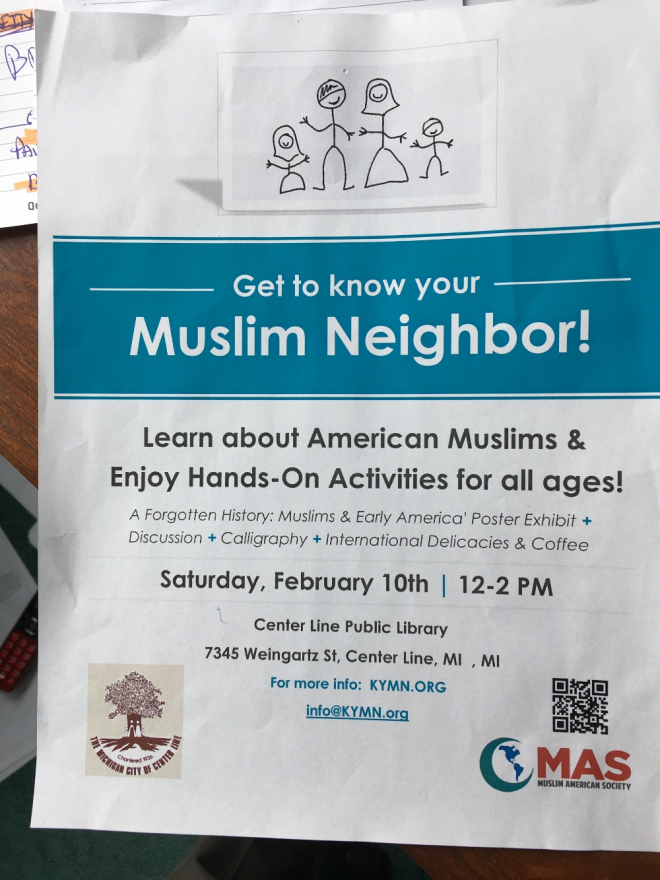 Center Line, Michigan, population 8,200, is a small town surrounded by the larger city of Warren, where thousands of Muslim migrants have arrived over the years, brought there by resettlement agencies, industries and universities.

That being the case, the Muslim American Society is co-sponsoring, with the city of Center Line, a “Get to Know Your Muslim Neighbor” event at the public library on Saturday, Feb. 10.

Gary Kubiak, who grew up in Center Line, said he was surprised to see the flyer promoting the event at his local library. He called to confirm it was actually taking place.

“I did call the Center Line library to confirm. The nice lady said the event is on, and said it’s a wonderful event,” he said. “She said she worked at other libraries where this event was held and thought it would be good to bring it to Center Line.”

Warren is not far from Sterling Heights, Madison Heights, Troy, Rochester and Rochester Hills, Dearborn, Hamtramck and Clinton Township. This cluster of suburban-Detroit cites has been on the receiving end of more than 14,000 Muslim refugees and migrants since the Sept. 11, 2001 terror attacks. Hamtramck became the first American city with a Muslim-majority city council in 2016.

With the influx of migrants has come tensions in the communities, schools, workplaces, etc., as Muslims are encouraged by the Council on American-Islamic Relations [CAIR] and other Muslim Brotherhood-influenced groups to assert their “rights” and place demands on the receiving communities. Demands include prayer rooms and special washrooms in the schools and universities, exceptions to dress codes in the workplace, halal foods in the jails, schools and hospitals and tolerance of strange cultural practices like the Muslim call to prayer blown over loudspeakers. A controversial mega-mosque planned for a residential area has divided the community in Sterling Heights.

That’s why the city of Center Line is hosting a Know Your Muslim Neighborevent at its public library Saturday, compliments of MAS.

The problem, says Philip Haney, an expert on Sharia and retired Homeland Security officer who worked in counter-terrorism for more than a decade, is that the MAS partner ICNA was named in the Explanatory Memorandumpublished in 1991 by the Muslim Brotherhood. This is the document that explains the Brotherhood’s strategy to infiltrate and dominate the U.S. from within. All of its outreach efforts are part of this seditious plan and fall under the umbrella of what the Brotherhood calls “civilization jihad.”

“These MAS-sponsored Know Your Muslim Neighbor events have been going on in cities throughout Michigan and the U.S. for years,” Haney said. The video below shows snippets of how they unfold. The events focus on half-truths and inconsequential facts, like that great Middle-Eastern food and those stylish head-scarves donned by the women.

At the 2-minute mark, a smiling, middle-aged Michigan woman tries on a hijab for the first time in her life, much to the delight of the Muslim women at the event. She appears totally oblivious to the fact that the hijab is a symbol of female oppression throughout the Muslim world.

According to the MAS Detroit website, it’s all about celebrating diversity. This is where the Muslim Brotherhood message dovetails with the globalist meme parroted by the Clintons and Bushes that “diversity is our strength,” even as it causes disunity and divisions in communities that were once cohesive and peaceful. The MAS website states:

“Know your Muslim Neighbor (KYMN) is a family-friendly event where local communities come together in a celebration of diversity and unity.  These public events provide an opportunity to meet new people, try new experiences, taste new food, and enjoy conversation with local Muslims. Hosted in public spaces and libraries in the Detroit metro area, KYMN offers hands-on Islamic art activities for children, henna hand painting, a poster exhibit on the history of Muslims in early America, and short presentations.

KYMN is brought to you by your friends at the Muslim American Society along with our partners at the Canton Public Library, the Islamic Association of Greater Detroit, and the Muslim Community of the Western Suburbs.”

But there’s more than meets the eye going on at these meetings, says Haney.

The man present in the background is a Salafist Muslim who adheres to the strictest Sharia code.

“You can tell just by the way he trims his beard. He’s the real guy in charge. Every one of those outposts has people like him to make sure the way of Allah is being followed,” Haney said.

‘Dawah is their specialty’

The MAS works closely with the Islamic Circle of North America or ICNA.

“Dawah is their specialty,” Haney said.

“People who do dawah are called Dawiya, which means missionary or what we call outreach in the secular arena,” Haney explained.

“So it’s a dawah organization, that’s what they are doing here today at the public library in Center Line, Michigan,” he added.

Dawah is a form of peaceful, civilizational jihad, used to establish Islam in the minds of a people not familiar with it. The ultimate goal is to elevate Islam to the point where it becomes the dominant religion in the community and anyone who resists will find themselves marginalized and considered “less than.” This is the hallmark of Sharia.

“In their campaigns three to five years ago they emphatically denied they had any intention of implementing Sharia law in America,” Haney said. “But then when it became obvious that wasn’t true, with people like Linda Sarsour talking openly about Sharia, they switched it up to say it’s being practiced but it’s compatible with the Constitution so it’s OK, don’t worry about it. And if you think it’s a threat you are an Islamophobe, you’re an extremist.

“It all ties in. It always will until it all finally gets resolved,” Haney said.

Haney believes a time is coming when America will have to make a choice. It’s the same choice that has already been made in the UK, Germany and Sweden — to either confront this ideology of Sharia or allow it to dominate and control what non-Muslims are allowed to say or write in public. Those countries have all enacted hate-speech laws that effectively serve as Islamic blasphemy laws, punishing anyone who speaks out critically of the new dominant faith – Islam.

“According to the Bible, if you don’t have a love for the truth you will receive a strong delusion. We have a natural craving for one or the other, light or darkness,” Haney said. “There comes a point where the darkness becomes so overwhelming that you actually start to become insane. That’s what we’re seeing with Democrats; they could not stand and applaud even when Trump said something at the State of the Union address they agreed with. So even when he says something good, they could not acknowledge it. When you’re only angry all the time you become like a zombie. They’re always outraged. Islam is doing outreach, and they’re always outraged.”

It is clear from the Muslim-American Society’s Facebook page that it is active not only in dawah but in lobbying politicians and the Chamber of Commerce. According to a Feb. 9 post, MAS’s Washington, D.C. chapter met with the Speaker of the Virginia House Kurt Cox, Gov. Ralph Northam and Chamber leaders all in the same day!

“The leaves are off the trees and you can see these creatures skulking around out there,” Haney said. “The question is, do our counter-terrorism specialists within the federal government know who these people are? If they do know, then why haven’t they taken action?”