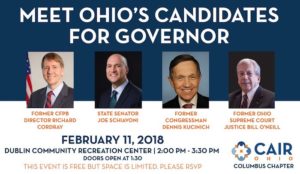 The Left’s normalizing of the Council on American-Islamic Relations is a principal sign of the myopia and short-sightedness of our age.  And the Right is just as culpable, by never making this an issue. Every Republican candidate ought to make the appearance of these Democrat candidates at this CAIR forum an issue, a scandal, an outrage. But nary a one of them will do so. And why not?

The candidates who appeared, Richard Cordray, Joe Schiavoni, Dennis Kucinich, and Bill O’Neill, all should have refused CAIR’s invitation, and called on the others to do so. CAIR is an unindicted co-conspirator in a Hamas terror funding case — so named by the Justice Department. CAIR officials have repeatedly refused to denounce Hamas and Hizballah as terrorist groups. Several former CAIR officials have been convicted of various crimes related to jihad terror. CAIR’s cofounder and longtime Board chairman (Omar Ahmad), as well as its chief spokesman (Ibrahim Hooper), have made Islamic supremacist statements about how Islamic law should be imposed in the U.S. (Ahmad denies this, but the original reporter stands by her story.) CAIR chapters frequently distribute pamphlets telling Muslims not to cooperate with law enforcement. CAIR has opposed virtually every anti-terror measure that has been proposed or implemented and has been declared a terror organization by the United Arab Emirates. A CAIR operative recently called for the overthrow of the U.S. government.

Thanks to Creeping Sharia.