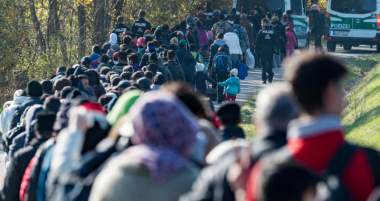 She was enthusiastic about the Muslim “refugees” entering Germany and even founded an organization to aid them. Now Rebecca Sommer — whom the migrants called “the stupid German whore” behind her back — has changed her tune. She says that the newcomers won’t shed “their medieval view,” are developing “parallel societies” within her country, and that if Germans “don’t wake up quickly, the whole situation will end tragically.”

(Note: Many outlets have reported this story inaccurately, stating that Sommer plans to move to Poland. What she actually said is that she knows Germans who are moving to Poland.)

Yet Sommer, an artist, indigenous-peoples activist, and UN advisor, has also moved — a bit closer to Truth. After founding the organization Working Group Asylum + Human Rights in 2012, she welcomed the huge 2015 influx of Muslim migrants into Germany; she and her 300 volunteers provided German language courses seeking to help the newcomers integrate. As InfoWars reports, “‘At that time I wanted to help everyone and truly believed that all these people were fleeing hell and were in a state of complete distress,’ Sommer told Polish weekly Do Rzeczy.’”

“With the initial hope that ‘their medieval view was going to change with time,’ Sommer soon realized that, ‘Muslim refugees have grown up with values that are totally different[;] they have undergone brainwashing from childhood on and are indoctrinated by Islam and absolutely do not intend to adopt our values,’” InfoWars also informs.

Thanks, Captain Obvious, as the kids might say. Old maxims tell us, “Give me the child for the first seven years and I will give you the man” and “As the twig is bent, so grows the tree.” Whether what was instilled is Islamic or socialist, theological or ideological, it’s naïve to think people will shed their deeply ingrained beliefs just because they step on your terra firma.

And how lacking is the integration? “Among my past and present pupils, I can count on one hand cases of those who are, in my opinion, completely and successfully integrated,” explained Sommer in an interview with Polish site EuroIslam (presented in English by Gates of Vienna).

Sommer “also observed how the migrants, ‘regard we infidels with disdain and arrogance,’ after they began to refer to her as ‘the stupid German whore,’ a realization that she says has led other refugee volunteers to quit,” InfoWars relates.

“Sommer now admits that despite her good intentions, she got it completely wrong and that Muslim migration poses an existential threat to the Germany [sic] way of life, a problem that will only be exacerbated by the process of family reunification, where migrants will be able to invite their relatives to stay in Germany.”

Consequently, while Sommer says she’s not giving up her activism, she’s now only helping women refugees and those from persecuted minorities, such as Christians and Yazidis.

Sommer’s story is perhaps an example of how, as the old Dutch saying informs, “We grow too soon old and too late smart.” But she could have been smarter sooner if she’d just listened to one particular orthodox Muslim: Dr. Mudar Zahran, a leader of the Jordanian Opposition Coalition and asylee currently living in the United Kingdom. In a 2015 interview (video below) he stated that most of the so-called “Syrian refugees” entering Europe weren’t actually from Syria, most of those who were from Syria weren’t from dangerous areas and didn’t need refuge, that terrorists were among them, and that they were coming to Europe largely to leech off the welfare system. Calling the influx “the soft Islamic conquest of the West,” Zahran warned that the Muslims should be kept out of Europe.

The results of not heeding such warnings are already apparent. Even liberal Newsweek reported in January that migrants in Europe are “linked to soaring violence and crime in Germany.” The most notorious example occurred New Year’s Eve 2015 when 1,200 women (whom we know of) were sexually assaulted by at least 2,000 migrant men in various German cities.

Yet the picture is even worse than statistics indicate. Since the bad press of Muslim crime could throw a monkeywrench into European governments’ multicultural agendas, they often cover it up — that is, when the victims don’t cover it up for them. As Sommer admitted in the EuroIslam (EI) interview, “The sexual molesting of [refugee aid] volunteers happens all the time, but none of us has ever reported such a case to the police because none of us wanted to be seen as an opponent of refugees and cause problems for the center.”

Sexual assault is so bad, in fact, that “anti-rape pants” have been marketed in Germany and have sold out quickly. To get a glimpse into the fear this reflects, watch the 2016 viral video below — which apparently has been censored by the German government and Facebook — in which a 16-year-old German girl desperately pleads for protection against migrant crime. (For English subtitles, click the “CC” icon in the lower right-hand corner.)

Another result of the migrant influx is the development of “no-go zones,” what Sommer calls “Muslim parallel societies”; these are areas in some European countries where authorities are often reluctant to enter and sharia law has to an extent supplanted civil law. Note that while leftist media labeled no-go zones a right-wing myth, the New York Times reported on them in 2007, perhaps before any other major outlet.

As for the moral of Sommer’s story, it’s in part a cautionary tale about no-go zones between the ears. The activist warned repeatedly in her EI interview of taqiyya — religiously sanctioned and encouraged lying in Islam — and says that while Kurds and others fleeing Mideast Muslims warned her of the tactic, she “did not want to listen to them.” This isn’t just a manner of speaking but reveals that she lied to herself. She didn’t say she thought they were wrong but that she didn’t want — want — to listen. This reflects an ideologically constrained mind that refuses to consider unwelcome truths.

The lesson is that the Truth can hurt but also sets us free, and we have an obligation to search for it in all matters — and to shed misbegotten emotional attachments that conflict with it.

Second, while leftists warn of “ethnocentrism,” they nonetheless are guilty of it, projecting their own “values” onto others. Consider that Sommer told EI that she initially was confident the Muslims would integrate because “I placed great trust in our libertarian, equitable European values, and I naively thought that every person must delight in them and take them on.” But why? Are they so obviously true?

Of course, people will resist even Truth when it contradicts cherished lies. But consider that when summing up these “values,” Sommer merely told EI that Germany needs refugees who accept “a secular state where women and men are equal before the law, where we eat pork, where they could even sunbathe naked on the beach. This freedom is very precious and very fragile.” I wonder, could she name even a few actual virtues?

As commentator Bret Stephens put it in 2015, “Having ignored its inheritance, Europe wonders why its house is falling apart.” Moderns believe in “shallow things, shallowly,” he wrote. If our civilization is now about little more than contradictory equality dogma, gorging on tasty meats, and women playing pieces of meat on beaches, then we shouldn’t wonder why we’re slouching toward Mecca; we have nothing for which to fight. Zealous Muslim faith cannot be countered with materialism and hedonism, for man does not live on bread alone.

The issue isn’t that Sommer was ideologically chauvinistic; it’s that she had no good reason to be. Even when (im)migrants are assimilable, there still must be something substantive to assimilate into. Communist activist Willi Munzenberg once said, “We will make the West so corrupt that it stinks.” It now stinks to high heaven as it denies Heaven and authors a cultural Hell. As a result, Western man, today’s migrants mainly come for your money, not your mores.

Sommer laments that soon the Germans will have to “adapt” to Muslim norms. Well, this certainly could be a lesson in virtue, because they’d lose a lot more than shallow equality rhetoric, pork sausages, and nude beaches.