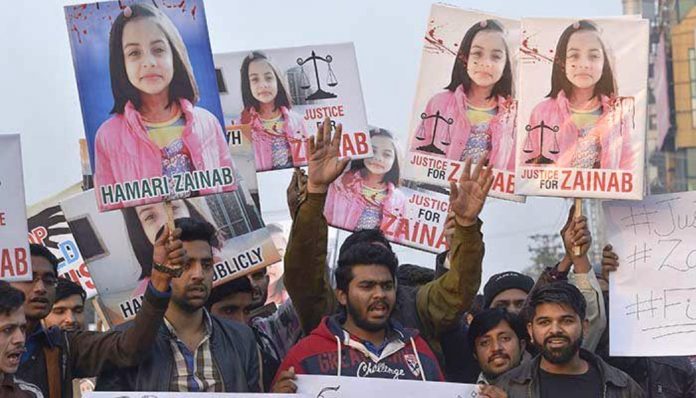 A sense of supremacism permeates everything in the Muslim supremacist’s life—even those things that Western media portray as laudable, humanitarian, or understandable.

Consider the rape and strangulation of Zainab Ansari, an eight-year-old Muslim girl whose mangled body was found in a dump last January in Pakistan.  The tragic incident sparked mass outrage in the Muslim nation.   Famous celebrities and tens of thousands of other Pakistanis “expressed their shock on social media using the hashtag ‘justiceforZainab’”; angry mobs attacked police and government buildings—leaving at least two dead and many wounded; Islamic clerics warned governmental officials either to produce the murderer instantly, step down—or else.  “Can we please catch this animal and punish him publicly?” is the question that “summed up many people’s exasperation at a lack of progress in finding the killer.”

Needless to say, the outrage sensed by Pakistanis concerning this hapless girl’s lot, and their desire to see justice meted out to her rapist-murderer, is appreciable.  The problem, however, is that this outrage is entirely predicated on the fact that she was Muslim.  Many young Christian girls have been and continue to be raped, mutilated, and murdered—only for Pakistanis to respond with deafening silence.

The following is a brief (and far from complete) list of these unlamented Christian girls:

“It is shameful,” explained local Pakistani sources while discussing the brutal rape of another 9-year-old Christian girl. “Such incidents occur frequently. Christian girls are considered goods to be damaged at leisure.  Abusing them is a right. According to the [Muslim] community’s mentality it is not even a crime. Muslims regard them as spoils of war (emphasis added).”

Nor, it should be mentioned, are Christian boys spared.  While in a Christian district in Pakistan, a group of Muslim men abducted a 7-year-old boy, took turns gang raping him before strangling and dumping his body in a field—just like Zainab.  The body of another Christian boy, Samuel Yaqoob, aged 11, was also “found near a drain … bearing marks of horrific torture, with the murder weapon nearby. His nose, lips and belly had been sliced off, and his family could hardly recognize him because the body was so badly burnt.”  Autopsy found “23 wounds by a sharp weapon” and indications “of sodomy.”

Explaining such incidents, Wilson Chowdhry, Chairman of the British Pakistani Christian Association, said, “Parts of Pakistani culture have a strong homosexual pederast culture, and Christian and other minority boys are especially susceptible to rape and abuse because of the powerlessness of their community and their despised status (emphasis added).”

And that’s the point. As “infidels,” Christians in Pakistan are widely seen as “untouchables,” fit only for picking the “excrement of Muslims,” and are thus regularly “treated like animals.” Outside the victims’ family and surrounding Christian community, virtually no one else in the 99% Muslim-majority nation cares when Christians and their children are savaged and murdered, the way Muslim Zainab was.

None of the aforementioned rape-murders of Christian children led to a nationwide scandal; none were followed by mass tweets and hashtags, outraged celebrities, mass uprisings, fatal riots, or threats to officials and police.  Nor did they earn their own Wikipedia page the way Zainab did.

Unsurprisingly, whereas the murderer of Zainab was caught days after the incident, the murderers of the aforementioned Christian children were never “found.”

It is precisely due to this indifference that rapists and murderers tend to target Christian children: if society doesn’t care, police won’t bother, and they can get away with it—if not be heroized for doing a service to Islam.  After explaining that “the forced conversion to Islam of women from religious minority groups through rape and abduction has reached an alarming stage” in Pakistan, the Asian Human Rights Commission elaborated in a 2011 report:

The situation is worse with the police who always side with the Islamic groups and treat minority groups as lowly life forms. The dark side of the forced conversion to Islam … also involves the criminal elements who are engaged in rape and abduction and then justify their heinous crimes by forcing the victims to convert to Islam. The Muslim fundamentalists are happy to offer these criminals shelter and use the excuse that they are providing a great service to their sacred cause of increasing the population of Muslims.

Not only do police in Pakistan do virtually nothing to combat this “jihad”; sometimes they themselves are the culprits.  In yet another instance, a “Christian boy was kidnapped, raped, tortured and killed by a police officer, his body similarly being dumped in a drain.”

More often, however, police and other local officials and imams merely side with the perpetrators, whenever the Christian victims’ families make too much noise demanding “justice”—that is, when they get too uppity for “dhimmis,” who according to Islamic law are required to “know their place” and be thankful that, as undesirable and vulnerable infidels, they are allotted any measure of tolerance at all.

For example, another 12-year-old Christian girl known as “Anna” was gang raped for eight months, forcibly converted, “married” to her Muslim attacker, but then escaped.  Instead of seeing justice done, she and her Christian family were last reported as “in hiding from the rapists and the police.”  Similarly, all that happened after a 2-year-old toddler was savagely raped because her Christian father refused to convert to Islam—leaving her anatomy permanently disfigured despite undergoing five surgeries—is that she and her family went into hiding for having made a “big deal” of the incident.

Muslim bias concerning who matters (fellow Muslims) and who doesn’t (everyone else) is regularly missed in the West.  For example, the Muslim obligation to pay zakat (often translated as “charity”) is always hailed in the West as a reflection of Islam’s “humanitarian” side—even though mainstream Islamic law insists that such “charity” go only to help Muslims, never the hated infidel.

Even when Muslims go on terrorist sprees in America—such as the NY subway bomber or the Ohio State stabber—media fall over themselves to suggest that it was outrage at the plight of suffering Muslims (always the Rohinyas in Myanmar) that prompted these men to go over the edge in their quest for “justice” (never mind that their American victims have nothing to do with Myanmar policy).

A more fitting explanation is that they merely hate infidels, as seen in the fact that Somalia, where Abdul Raza, the Ohio state stabber was born and raised, is considered the second worst Muslim nation in the world wherein to be Christian (which is certainly saying something since some 40 of the absolute worst 50 nations are Muslim).  Although Christians can be essentially beheaded on sight in Somalia, such an “injustice” against his own fellow countrymen never seemed to bother the supposed “bleeding heart” of Abdul.

Islam is responsible for this bias: the Koran calls on Muslims to be “forceful against the infidels, merciful among themselves [48:29]”; Islamic doctrine holds that Muslims are superior to non-Muslims — who are further likened to dogs and cattle.  Hence, if they care little when subhuman infidels are raped and murdered, they get angry seeing infidel minorities agitating for equality with Muslims—and they get downright murderous seeing infidels actually lording over Muslims.

From here, one begins to understand the ultimate Muslim grievance: Israel. If powerless and downtrodden Christian minorities in the Muslim world are still treated atrociously, how must Muslims feel about Jews—the descendants of pigs and apes, according to the Koran—exercising power and authority over fellow Muslims?  Unmitigated outrage.

Of course, if grievances against Israel were really about universal justice and displaced Palestinians, Muslims would be even more aggrieved at the fact that millions of Christians are currently being displaced in the name of jihad and generally treated in ways that make being Palestinian seem enviable.

Needless to say, they are not aggrieved—and will not be anytime soon; for Muslim grievances are based on what hurts Muslims, never what hurts infidels—quite the opposite.