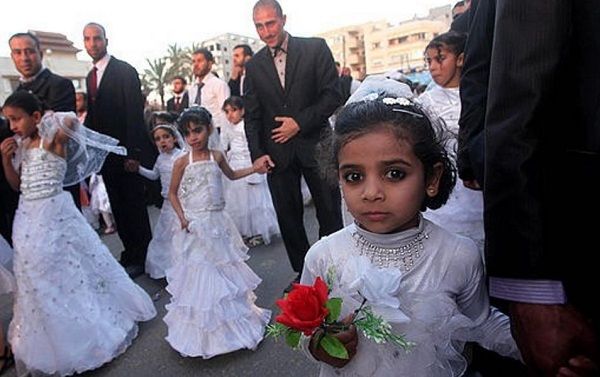 Child marriage is a problem that comes in large part from the “developing” world where economic and educational opportunities for females are generally fewer. However, child marriage has become an issue even in Western countries like Germany because of the rise of immigrants coming from Syria, Afghanistan, Iraq, and other Muslim countries. The Gatestone Institute provides some figures on the size of this problem in Deutschland, stating:

German authorities are debating the contours of a new law that would crack down on child marriages after it emerged that some 1,500 underage brides are now living in the country.

The married minors are among the more than one million migrants from Africa, Asia and the Middle East who entered Germany in 2015.

The German Interior Ministry, responding to a Freedom of Information Act request, recently revealed that 1,475 married childrenare known to be living in Germany as of July 31, 2016 — including 361 children who are under the age of 14.

Most of the married children are from Syria (664), Afghanistan (157) and Iraq (100). Nearly 80% (1,152) are girls. The true number of child marriages in Germany is believed to be much higher than the official statistics suggest because many are being concealed.

German law currently allows minors aged 16 or over to get married if their partner is of legal age and the parents or guardians consent. Germany does not recognize marriages contracted abroad if a partner is under 14, but German family courts have discretion to determine the validity of marriages concluded abroad by minors who are 14 or older.

German officials seem to be targeting Muslim leaders that are complicit in the child marriage practice by suggesting legislation that penalizes “imams responsible for marrying minors up to £900.” As stated above there is a double standard when it comes to child marriages performed outside of Germany compared to inside the country. The Gatestone Institute points out a case where Sharia law ended up influencing the ruling on one marriage that was performed in Syria, stating:

In May, an appeals court in Bamberg recognized the marriage of a 15-year-old Syrian girl to her 21-year-old cousin. The court ruled that the marriage was valid because it was contracted in Syria, where such marriages are allowed according to Islamic Sharia law, which does not set any age limit to marriage. The ruling effectively legalized Sharia child marriages in Germany.

The case came about after the couple arrived at a refugee shelter in Aschaffenburg in August 2015. The Youth Welfare Office (Jugendamt) refused to recognize their marriage and separated the girl from her husband. The couple filed a lawsuit and a family court ruled in favor of the Youth Welfare Office, which claimed to be the girl’s legal guardian.

The court in Bamberg overturned that ruling. It determined that, according to Sharia law, the marriage is valid because it has already been consummated, and therefore the Youth Welfare Office has no legal authority to separate the couple.

Apparently, the ruling has caused a lot controversy, and for good reason. There are efforts to ban the practice of child marriage in Germany – such pressure is coming from “[m]embers of Chancellor Angela Merkel’s Christian Democrats and their Bavarian allies in the Christian Social Union[.]” An alleged “strategy paper” provides some good advice for future legislation, saying:

“An 11-, 13- or 15-year-old girl belongs not in marriage but in school. In the future, the principle must be the annulment of child marriages contracted abroad. The primacy of the child’s welfare and the equal treatment of men and women are pillars of our society and of our understanding of values. Child marriage is therefore absolutely incompatible.”

It is essential for German officials to get legislation passed that at least puts some of the same basic standards on foreign marriages as with domestic German marriages. Furthermore, officials need to get the message across to the entire Muslim community that illegal child marriages will not be tolerated – especially if the Muslim leadership wants to justify the practice by invoking Muhammad’s marriage with six-year-old ‘A’isha (consummated at nine). Girls as well as boys should be given the opportunity to receive an education and develop their God-given gifts.