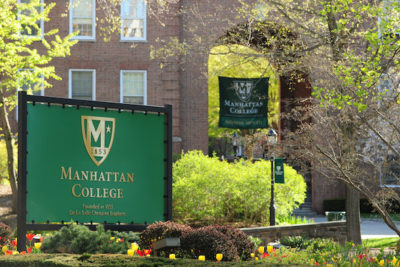 I just received this extraordinary email from a Muslim student at Manhattan College in the Bronx. It is noteworthy not just for this student’s courage in thinking for himself and not passively accepting what he is taught either at home or at his far-left college, but also for what he reveals about the Balkan Muslim community in New York (“rapidly moving toward radical beliefs”) and about Manhattan College (“Every hallway, every classroom, every announcement, every email; contains an extreme amount of Islamic advertising”).

This is true not just of Manhattan College, but of colleges and universities all over the country. Likewise I’m sure that other Muslim communities in the U.S. are moving in the same direction as the one to which this courageous young man belongs. It won’t be very much longer before America begins to see on a large scale what folly the Democrats’ immigration and counterterror policies really have been, and what damage they have brought upon our country.

I am a Muslim Albanian college student and I attend Manhattan College in Riverdale NY. I am shocked to say that I have only recently stumbled upon your web-page and YouTube videos. I have criticized Jihad and Radical Islam since as long as I can remember and continue to do so despite being ridiculed. My family is from Montenegro and was not religious prior to coming to the United States in 80’s, and continues to be the same. Nobody prays or even goes to the Mosque. Manhattan College is a Lasallian Catholic institution who’s tuition can hit up to 60K a year. Every hallway, every classroom, every announcement, every email; contains an extreme amount of Islamic advertising whether it be a club, or a prayer meeting or even an event.(The walls of every hallway are covered with flyers) I am outraged that my professors are all brainwashed by a left wing ideology which I have said long before I found out about you, is in an alliance with Islam. The only thing that tells you you’re at a catholic school is our chapel. Being educated by these leftists makes school practically worthless, and it is become extremely hard for me to choose a path in academia where I would feel that I am not wasting time, and one that would benefit me.

My reason for sending this email is to tell you that you are an inspiration and a true patriot for the country we are loyal to and love. After reading Bosnia, Serbia, Kosovo and Balkan articles on your webpage, I was not surprised at all. My position on Serbia is similar to yours but happens to be an unthinkable one within the Albanian community. I believe that there is reason to believe that the Albanian, Bosnian, and Montenegrin community (which are pretty much one and the same) in the United States and New York in particular is rapidly moving toward radical beliefs. The community talks about many families who are extremely religious and are more like Arabs than they are Albanians. I have no tangible evidence of this other than my few experiences and hear-say, but I believe it is my duty to report this, which I see as a potential threat to the nation to which I pledge allegiance; to those who are currently in positions to investigate, bring light to, and make changes. A closer look needs to be taken at Balkan People, who they associate themselves/have economic ties with back in Europe, and who their link is to the Islamic world, which I happen to believe is Turkey. At the current time I do not wish to be in the public eye for any reason, and I would appreciate if for some reason this email would be talked about, that my name is not used, but that is subject to change in the near future as our battle continues to get harder.

Thank You and God Bless You,
[Name redacted]