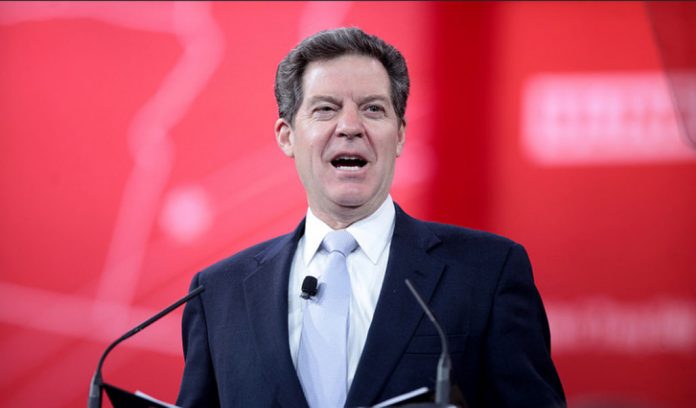 Sam Brownback, along with a number of State Department officials, participated with Sheikh Abdullah Bin Bayyah at an interfaith event in Washington, D.C. February 6, 2018.

At the event, Brownback can be seen appearing on the stage with and shaking the hand of Bin Bayyah, a Muslim Brotherhood leader who supports Hamas, the elimination of Israel and killing of U.S. soldiers.

In 2012, Bin Bayyah said that donations to jihad fighters qualify as zakat, the Islamic

version of tithes. In April 2013, he said that Muslim leaders should give Hamas financial and military assistance to fight Israel.

Bin Bayyah was formerly the vice chairman of the International Union of Muslim Scholars, a group led by Muslim Brotherhood spiritual leader and terrorist-supporter Yousef al-Qaradawi. In 2004, the group issued a fatwa ruling that Muslims have a “duty on every able Muslim in and outside of Iraq” to support attacks on U.S. soldiers in Iraq.

A 2009 fatwa –written either by the union or Bin Bayyah — ruled that any Muslim who supports normalization of relations with Israel or has any political, economic or cultural dealings with Israel is a traitor. The punishment for traitors is death.

In May of 2014, the State Department tweeted out an article by Bin Bayyah condemning Boko Haram and their kidnapping of over 200 Nigerian girls. The next month, the department apologized for promoting the article because of its author.

Yet, astonishingly, four months later in September of 2014, then-U.S. President Obamachose Sheikh Abdullah Bin Bayyah — of all the clerics in the world who condemned ISIS – for special mention in his address to the United Nations.

“The ideology of ISIL or al Qaeda or Boko Haram will wilt and die if it is consistently exposed, confronted, and refuted in the light of day. Look at the new Forum for Promoting Peace in Muslim Societies – Sheikh bin Bayyah described its purpose: ‘We must declare war on war, so the outcome will be peace upon peace,’” Obama said.

Brownback appeared with Bin Bayyah at the Alliance of Virtue conference. The aim of the two-day conference was to “develop and build mechanisms for promoting peace that involves faith leaders from the Abrahamic communities” (Muslims, Christians and Jews).

A simple internet search by the State Department would have found that Bin Bayyah is a radical unworthy of association with the U.S. government, as they concluded in 2014.

Yet, it seems that under Secretary Tillerson, Islamists – and particularly members of the Muslim Brotherhood – are still considered friends of the State Department.