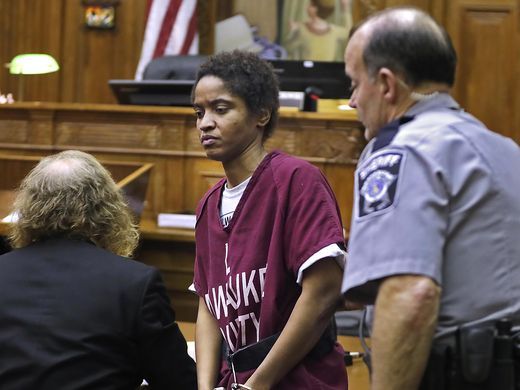 In an anguished decision, a judge on Friday ordered a father to arrange funeral services for his abused daughter, whose body has languished at the Milwaukee County morgue for two months.

Calling the case “horrific,” Circuit Court Judge David Borowski granted Michael Krouser’s request for exclusive custody of his daughter’s remains, but not before delivering a scathing rebuke of the man, who had been absent from his children’s lives for years.

Judge who rebuked father, not the Muslim mother who killed her daughter

“You show up on the scene after your 14-year-old, who you haven’t seen in eight or nine years, is beaten to death. Allegedly. It’s a classic situation of too little, too late. Had you been an actual father, involved father, involved parent, you might have been able to prevent this.

“You, Mr. Krouser, should feel guilty for the rest of your life.”

Amina Krouser died in December after a brain infection and alleged beating by her mother, Azlyza Ababneh, who has been charged in the case.

The child’s body remained in the county morgue since then because Ababneh objected on religious grounds to Krouser’s plans to cremate the teen’s body and have her ashes shipped to his home in Texas.

Ababneh is Muslim, according to her attorney, Scott Anderson.

“Cremation is a sin,” he said.

Under Wisconsin law, a parent who commits homicide loses his or her right to decide what to do with a decedent’s remains.

These are not homicide charges. Thus, Ababneh has retained a say in the disposition of Amina’s body, which has been stored at the county morgue since her death on Dec. 10.

At the hearing Friday, Borowski described the case as possibly “the first case of its kind in Wisconsin” and said he could find little guidance in how such a matter should be adjudicated.

The difficulty of his decision, Borowski said, was deepened by the father’s all but complete absence in Amina’s life or the lives of her two siblings.

Krouser, who at times appeared confused, admitted that since his divorce from Amina’s mother, he had paid little if any child support, was only vaguely aware of where his children lived and had almost nothing to do with them.

“I would appreciate if you look at me while I say this,” Borowski said to Krouser, who hung his head at the plaintiff’s table.

“Your behavior as a father these eight years has been atrocious. It’s been embarrassing, and I would say despicable.”

Krouser had testified that it was Amina’s siblings’ desire that she be cremated, not his.

“You didn’t really care about these children,” Borowski said.

But, Borowski said, he could not ignore the charges against Amina’s mother.

According to a criminal complaint, Amina and her two siblings lived with their mother in a house with no heat or running water, strewn with feces and filth.

Her condition worsened over the next four days. Eventually, she did not know her name and lost control of her bladder.

Ababneh believed her daughter was being lazy and beat her with a belt and a plastic pipe.

On Dec. 3, Amina was taken to Children’s Hospital of Wisconsin. The infection had spread to her brain and doctors wanted to perform emergency surgery. Ababneh refused to give them permission.

Doctors operated anyway. They were unable to save Amina. She died Dec. 10.

But, Borowski said, he could not allow Amina’s body to remain at the morgue, to be eventually turned over to the county to be buried in an unmarked grave.

“That would be a further indignity to this poor child,” he said.

“This is not a religious dispute,” Borowski said. “It is a dispute between two parents.”

The father, for all his faults, is willing and able to do something with Amina’s remains. The mother, he said, is not.

In giving the father control of Amina’s body, Borowski made no decision if the child should be cremated or buried, and if buried, where. He did, however, order the father to provide a funeral service for Amina.

“She at least deserves a decent, respectful service,” he said.