Ukip’s interim leader, Gerard Batten, has reiterated his belief that Islam is a “death cult” and called for Muslims to be asked to sign a document renouncing parts of the Qur’an, in remarks that risk pushing the beleaguered party even further from the mainstream.

Batten, an MEP for London, took over as party head on Saturday after Henry Bolton was removed at an emergency general meeting of party members, called when Bolton refused to step down following controversy about his personal affairs.

It followed reports of Bolton’s relationship with Jo Marney, a party activist who was found to have sent offensive and racist messages, some about Meghan Markle, the fiancee of Prince Harry.

Batten, formerly Ukip’s Brexit spokesman, has previously attracted controversy for calling Islam a “death cult”, saying non-Muslims were rational in being afraid of the faith and calling for a ban on the construction of new mosques in the UK. 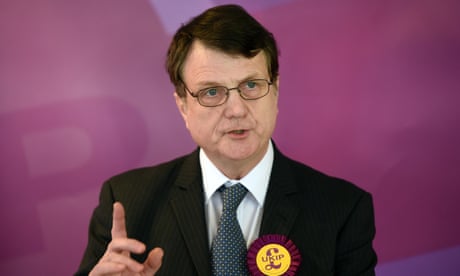 In his first interview since becoming interim leader, Batten told Sky News’s Paterson on Sunday he would consider whether to seek the job permanently and defended his opinions.

Asked about calling Islam a death cult on his personal blog, he said: “What I wrote there about Islam is factually and historically true, and anybody that cares to look at the history of Islam over the last 1,400 years will see that that is true.

“It was propagated by invasion, by violence and intimidation. And if you look at every continent in the world where you have this belief, then you have violence. It glorifies death. They believe in propagating their religion by killing other people and martyring themselves and going and getting their 72 virgins.”

This was also the view of “a significant minority” of Muslims, he said.

Batten also said he still supported the idea of British Muslims being asked to sign a text formally renouncing elements of the Qur’an “which allow people to justify violence and extremism” and to publicly support equality and tolerance.

“I don’t think it’s unreasonable to think that people who come and live in our country should reject these dark-age ideologies, which many of them bring with them,” he said.

The idea of a ban on building new mosques was his personal opinion, Batten said, and he would not necessarily seek to make it Ukip policy.

A spokesman for Hope Not Hate, which campaigns against far-right views, said Batten was “an Islamophobe and conspiracy theorist” with links to other anti-Muslim activists.

He said: “His extreme comments, while shocking, are not surprising. His obsessions with Islam go way beyond the pale and are both hugely offensive as well as potentially dangerous.”

Under the leader before Bolton, Paul Nuttall, Ukip sought to find new relevance following the EU referendum by introducing a so-called integration agenda targeting Muslims at the 2017 election, including a proposed ban on full-face veils in public.

This move toward more overt cultural populism alarmed some in a party with a strong libertarian wing. One of Ukip’s most senior figures, its former general secretary Jonathan Arnott, also an MEP, said he was leaving in January, in part because of the party’s stance on religion.

When Nuttall resigned, Bolton narrowly won a leadership election over an openly anti-Islam candidate, Anne Marie Waters, whose campaign was assisted by a far-right former BNP member. Bolton had promised to seek to be more moderate.

Batten told Paterson his main task was to “stabilise things and try to get them back on track” for a party that has slumped into chaos and near-irrelevance, after having won the third-most votes in the 2015 general election.

Bolton has indicated he could seek to stand again for leader. Batten said: “I don’t think it would be a good idea, because I don’t think he’s going to get very far. If he wants to waste his money and be a contender that’s up to him.”