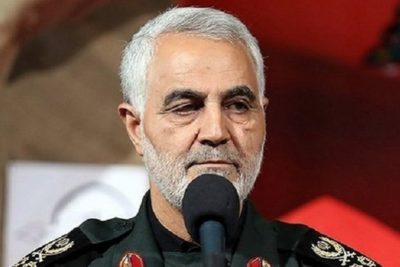 Yesterday, the Geller Report brought you the news that Mohsen Rezaei, secretary of Iran’s Expediency Council and former chief of Iran’s Revolutionary Guard, said the Islamic Republic will “level Tel Aviv to the ground” if Israel carries out an attack.

That was not singular. Iran’s saber-rattling and its calls to destroy Israel are more or less constant. The United Nations would not tolerate these repeated vows by one member state that it will wipe out another member state if the targeted nation were any one other than Israel. But when it comes to Israel, any threat, any provocation, any outrage is welcomed by the UN, which is dominated by the Organization of Islamic Cooperation (OIC).

This is yet more of the poison fruit of Obama’s nuclear pact with the world’s leading state sponsor of terror. And there will be even more.

“At Memorial for Slain Hezbollah Terrorist, Iran’s Soleimani Pledges to “Wipe Out” Israel”, The Tower, February 15, 2018:

Qassem Soleimani, the head of the Quds Force, the extraterritorial wing of the Iran’s Islamic Revolutionary Guard Corps (IRGC), threatened Thursday to “wipe out” the State of Israel on the tenth anniversary of the assassination of Hezbollah terror chief Imad Mughniyeh, The Times of Israel reported.

Speaking at a Tehran ceremony, Iran’s supreme spy master said that the revenge for shedding Mughniyeh’s blood would be to “wipe out the Zionist entity.”

Imad Mughniyeh, the former global operations chief of Iranian-backed Lebanese terror group Hezbollah, who died in a bomb blast in Damascus on February 12, 2008, was reportedly assassinated in a joint Mossad-CIA operation. His son Jihad, a Hezbollah commander, was killed in a 2015 airstrike, which was also attributed to Israel, on a military convoy near the border with Israel.

According to Iranian media reports, Soleimani charged that Israel lived in fear thanks to the sacrifice of Imad Mughniyeh and other “martyrs” in Lebanon, Iraq and Palestine and his death “resulted in Islamic uprising” against Israel.

The leader of the Quds Force also claimed that Mughniyeh “forced” Israel’s army to withdraw from southern Lebanon in 2000 and praised him for “fortifying the Gaza Strip,” where the Iranian-backed terror group Hamas is in complete political and military control.

In 2014, Iranian Foreign Minister Mohammad Javad Zarif, the Iran’s chief nuclear negotiator, laid a wreath at the grave of Imad Mughniyah. The United States condemned his decision to honor a terrorist who had spent decades killing Americans and others.

Soleimani made his comments in the wake of renewed tensions on the Israeli-Syrian border. On Saturday, Iran launched its first direct military operation against Israel, dispatching a drone from the Tiyas Airbase in Syria’s central Homs region. The Israelis destroyed the drone, and carried out retaliatory strikes in Syria after one of its F-16 fighter jets was lost as a result of Syrian anti-aircraft fire.

On Wednesday, United States Ambassador to the United Nations, Nikki Haley, described Iran’s piloting of a drone into Israel a “wake-up call” to the world regarding Iranian efforts to build a permanent military presence in Syria…..