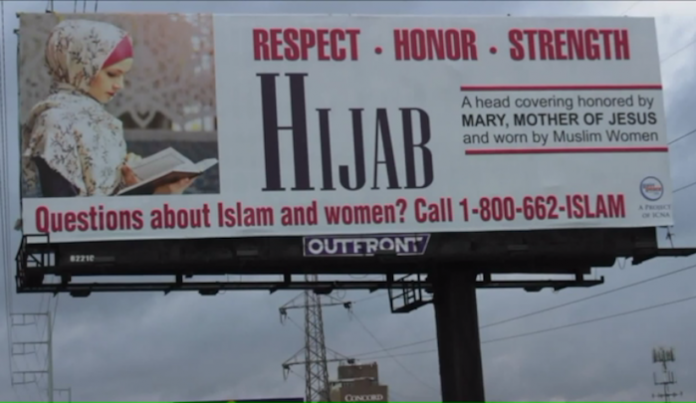 GainPeace says that it “works under the umbrella of Islamic Circle of North America.”

The Islamic Circle of North America: “ICNA has close ties to the Muslim Brotherhood, the ideological forebear of all radical Islamic movements — including Hamas and al-Qaeda. Documents show that Hamas officials have participated in previous ICNA events. ‘The ICNA’s hatred of the Jews is so fierce,’ writes Emerson, ‘that it taunted them with a repetition of what Hitler did to them.’ In his book American Jihad, [terrorism expert Steve] Emerson expounds: ‘The ICNA openly supports militant Islamic fundamentalist organizations, praises terror attacks, issues incendiary attacks on western values and policies, and supports the imposition of Sharia [Islamic law].’ ICNA was named in a May 1991 Muslim Brotherhood document — titled ‘An Explanatory Memorandum on the General Strategic Goal for the Group in North America‘ — as one of the Brotherhood’s 29 likeminded ‘organizations of our friends’ that shared the common goal of destroying America and turning it into a Muslim nation. These ‘friends’ were identified by the Brotherhood as groups that could help teach Muslims ‘that their work in America is a kind of grand Jihad in eliminating and destroying the Western civilization from within and “sabotaging” its miserable house by their hands … so that … God’s religion [Islam] is made victorious over all other religions.’”

At a 2014 ICNA-sponsored protest in Florida, demonstrators chanted “We are Hamas!” One of its leaders was a jihad war criminal in Bangladesh.

“The women who spoke about the billboards at Monday’s news conference also talked about the hatred they have encountered while wearing a hijab. One woman was almost run off the road by someone yelling slurs and her. Another talked about her daughter being called a ‘towel head.’”

Is there any police documentation of these allegations? No one, I am sure, bothered to check. Women in the U.S. are being fed the false narrative that hijab-wearing women are actually being harassed and persecuted in the West — and that standing in solidarity with them is feminist. Yet the harassment and persecution is more manufactured than real. Just weeks ago, an eleven-year-old girl in Toronto made international headlines with her claim that a man had followed her and cut her hijab with scissors. After an investigation, police concluded that the attack never happened.

Likewise, Yasmin Seweid, a Muslim teen who claimed in December 2016 that Trump supporters on a New York subway tore off her hijab and no one in the packed subway car helped her. She, too, gained international media attention, and she, too, made up the whole thing.

Shortly before that, a hijab-wearing Muslim student at San Diego State University also falsely claimed that she was assaulted by Trump supporters.

In July 2017, a Muslim in Britain falsely claimed that a man had pulled off her hijab in a “race hate attack.”

In November 2016, a University of Michigan Muslim student claimed she was “accosted by a white man who told her to remove her hijab or he would set her ablaze with a cigarette lighter.” She also fabricated the whole event.

Nonetheless, on World Hijab Day non-Muslim women all over the country wore hijabs in solidarity with Muslim women who are supposedly plagued by “Islamophobic” harassment.

But where was their concern for Aqsa Parvez?

Her Muslim father choked her to death with her hijab after she refused to wear it.

Or for Aqsa and Amina Muse Ali, a Christian woman in Somalia whom Muslims murdered because she wasn’t wearing a hijab?

Courageous women in the Islamic Republic of Iran are taking off their hijabs as a sign of resistance to the oppressive Sharia regime under which they live, and at least 29 women have been arrested for doing so. Who is standing in solidarity with them?

The billboards are the first of their kind in the country, designed by a group called GainPeace, which encourages non-Muslims to call the organization and ask questions to gain a better understanding of why women wear the hijab. The billboards draw a similarity to the Christian religion where Mary is considered the mother of Jesus. She also wore a hijab.

The billboards are located on Interstate 294 near Interstate 88, and Interstate 55 and LaGrange Road.

“Wearing the hijab is 100 percent my choice. As contrary to the popular belief, hijab in no way oppresses us. In fact, it indicates the opposite as hijab symbolizes the power to women, and not inferiority,” Sara Ahmed, GainPeace volunteer, said.

“Hijab is a simple yet powerful reminder of strength. I stand here today so that generations tomorrow do not feel deprived or threatened by their choice of dress. So that they may have the courage to stand by their beliefs, and so that this piece of cloth does not label them or categorize them with an unwanted label,” Kiran Malik, GainPeace volunteer, said.

The women who spoke about the billboards at Monday’s news conference also talked about the hatred they have encountered while wearing a hijab. One woman was almost run off the road by someone yelling slurs and her. Another talked about her daughter being called a “towel head.”…