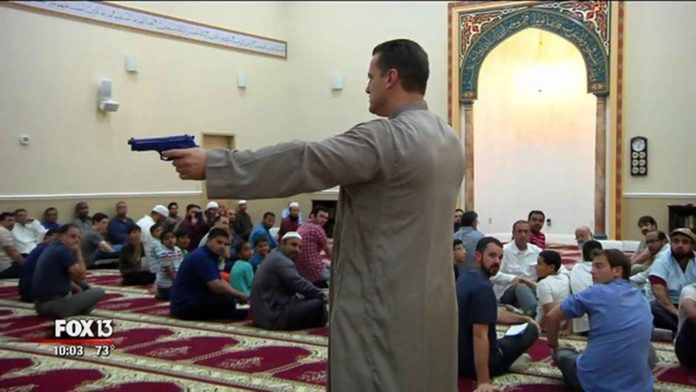 Nezar Hamze is a leader in the Hamas-related Council on American-Islamic Relations (CAIR). He is also a Deputy Sheriff in the Broward Sheriff’s Office (BSO), in Broward County, Florida. This background has given him the opportunity to exploit his position in law enforcement to assist his Islamist friends in their desire for weapons training. This month, he did so at a Tampa Bay, Florida mosque that partners with designated terrorist organizations.

CAIR was established in June 1994 as part of the American Palestine Committee, a terrorist umbrella group headed by then-global head of Hamas, Mousa Abu Marzook. Marzook is currently residing in Egypt as second in command of Hamas. In 2007 and 2008, CAIR was named by the US Justice Department a co-conspirator for two federal trials dealing with the financing of millions of dollars to Hamas. Since its founding, a number of CAIR representatives have served jail time and/or have been deported from the US for terrorist-related crimes.

Nezar Hamze is the CEO and Regional Operations Director for the Florida chapter of CAIR or CAIR-Florida. In July 2014, CAIR-Florida co-sponsored a pro-Hamas rally in Downtown Miami, where rally goers shouted, “We are Hamas” and “Let’s go Hamas.” Following the rally, the event organizer, Sofian Abdelaziz Zakkout, wrote, “Thank God, every day we conquer the American Jews like our conquests over the Jews of Israel!” In August 2014, CAIR-Florida Executive Director Hassan Shibly  wrote, “Israel and its supporters are enemies of G-d…”

In November 2014, CAIR was one of three groups operating within the United States to be named a terrorist organization by the government of United Arab Emirates (UAE). The other two US-based groups named were the Muslim American Society (MAS) and Islamic Relief (IR). Additional groups named were ISIS, al-Qaeda and Boko Haram.

This past weekend, CAIR’s Hamze, using his position as a law enforcement officer, traveled to the Tampa, Florida area to perform weapons training at the Daarus Salaam Mosque, also known as the Islamic Society of New Tampa (ISONET), a mosque associated with all three US groups named to UAE’s terror list.

Last month, the ISONET youth group organized an interactive leadership workshop that was co-sponsored by the Tampa chapter of the Muslim American Society (MAS), titled ‘Destined to Lead?’

MAS was founded in 1993 by a group of individuals from the Muslim Brotherhood, which included the future global leader of the Brotherhood, Mohammed Mahdi Akef. The current National Executive Director of MAS is Mazen Mokhtar. From 1992 through 1996, Mokhtar made numerous statements on the internet in support of Hamas and suicide bombings. Prior to the September 11 attacks, Mokhtar served as a web designer for what was then the main website raising funds and recruiting fighters for al-Qaeda and the Taliban, Qoqaz.net.

The Tampa chapter of MAS or MAS-Tampa has its own sinister history. Quotes found previously on MAS-Tampa’s E-Library include ones about cutting off Jews’ heads, burning homosexuals to death, and banishing men to Hell for being “submissive to the likes and dislikes of a woman.” Muslims were told on the site that they “must always worship Allah and wage jihad until death.” The site stated, “The greatest sacrifice for God is made in Jihad, for in it a man sacrifices not only his own life and property in His cause but destroys those of others also.”

In October, the ISONET youth group co-sponsored an event with the American affiliate of Islamic Relief (IRUSA) to raise funds for Syrian refugees.

Islamic Relief’s ties to terror are well known. The Russian government has accused Islamic Relief of supporting terrorism in Chechnya. Israel has banned the group, labeling it a Hamas front and arresting the organization’s Gaza Program Manager, Ayaz Ali, in 2006, for providing assistance to Hamas. Reports show that Islamic Relief has sent millions of dollars to and received tens of thousands of dollars from groups related to al-Qaeda.

The Chairman of IRUSA is Khaled Lamada. Lamada is also the co-chairman of the Islamic Circle of North America and Muslim American Society (ICNA-MAS) national convention. ICNA has been linked to terrorist financing and has used the web to promote a number of terrorist groups, including Hamas, al-Qaeda, Hezbollah and the Taliban. Lamada, who is a huge fan of jailed Egyptian Muslim Brotherhood leader, Mohamed Morsi, has used social media to advocate for the Muslim Brotherhood and Hamas.

In the last three months – October, November and December – Daarus Salaam has sponsored events with three designated terrorist organizations, the only three groups to be named terrorist organizations by UAE. And the last of these events was one where mosque goers were taught how to use weapons, while Hamze brandished a gun in each hand, wore a Muslim outfit that resembled a trench coat, and simulated firing at his audience. The mosque referred to the event as ‘Active Shooter Training.’

This was not the first time the mosque held an event with CAIR. In March, ISONET sponsored a ‘Community Town Hall Meeting,’ featuring different officials from CAIR-Florida. One of the CAIR officials was Ahmad Saleem, who just two months later was arrested during a sex sting operation and charged with driving to a house, where he had planned to have illegal intercourse with a twelve-year-old girl he had met online.

Attending the Hamze event was Magda Elkadi Saleh, mosque spokesperson and President for the mosque’s charity, Radiant Hands. Saleh was the founding Principal of the Muslim children’s school, American Youth Academy (AYA), and was with AYA from 2004 till she left earlier this year. Prior to 2004, AYA was incorporated under another name, the Islamic Academy of Florida (IAF), a school founded by then-Palestinian Islamic Jihad (PIJ) leader Sami al-Arian and named by the US government, in a 50-count indictment, as being a party to the raising of funds for PIJ.

According to the mosque, the weapons training event took place as a result of the shooting attacks, which transpired in San Bernardino this month, and the potential for a backlash against Muslims due to the attacks. Whether or not there was merit in such an event – and according to federal ‘hate crime’ statistics regarding anti-Muslim acts, the merit may be highly exaggerated – one cannot look past the venue for the event or the individual doing the training.

Instead of radical mosques worrying about a backlash against their attendees due to the sinister acts of those who would be associated with them, local and federal law enforcement agencies should worry about the potential of new terrorists being created as a result of these types of events. That includes the law enforcement agency which employs the trainer, Hamze.

Giving weapons training to Muslims with radical ideologies, who associate themselves with terrorist groups, is equipping these same Muslims to wage armed jihad. The instruction must be halted immediately.

If you wish to contact Broward Sheriff Scott Israel to voice your opinion on this matter, you can do so by sending an email to ask_the_sheriff@sheriff.org or by calling 954-831-8901.