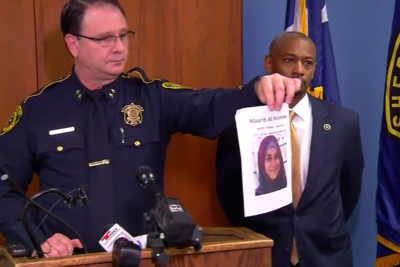 Her Muslim migrant Iraqi family regularly beat her. They were not citizens of this country. The FBI has joined the search for a 16-year-old San Antonio girl, missing for almost a month. Maarib Al Hishmawi was last seen leaving William Howard Taft High School at 12:30 p.m. on Jan. 30, authorities said.

Officials said the investigation revealed the teen had been routinely physically abused by family members. Authorities are focused both on finding her and ensuring she is in a safe environment.

“We understand it’s been a recurring issues for her,” Assistant Chief Deputy Ronald Bennett said. “This is not a typical missing 16-year-old.”

2) She was returned to Iraq.

3) She got away to safety (the least likely).

Watch the press conference carefully. It sounds just like Rifqa Bary, who did run away and escape the deadly threat of her devout Muslim family. But Rifqa surfaced days later. And we helped insure Rifqa’s safety. But this young girl disappeared on January 30th. She’s been gone close to a month. Not good. If she or anyone who knows her  is reading this, email me at pamelageller@gmail.com, we’ll get you to a safe house.

The FBI has been brought in because she is Muslim. Law enforcement is bringing in “cultural education” for investigators. Something tells me it’s not Ibn Warraq or Nonie Darwish, but propagandists for sharia like terror-tied operatives like CAIR.